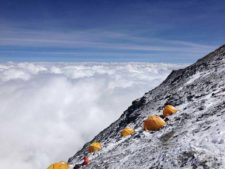 If there is one thing that is predictable about climbing Mt. Everest it is the unpredictability. Currently some teams must feel like a yo-yo. They were heading higher, but then retreated. However one team kept going and separately, a record was set for female summits on Everest.

44-year-old Lhakpa Sherpa set record with 8th female summit on Tibet side 13 May. Lhakpa, who once worked in a 7-Eleven shop in Connecticut, has three children and once summited eight months after the birth of her first daughter and while she was two months pregnant with her second child. Her first summit was in 2002. She was quoted :

… wanted to show that Nepali women have the courage and endurance to perform their best despite all their hardships. 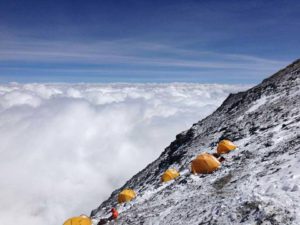 Camp 3 at 8300 meters on Everest North Side. courtesy of Transcend Adventures

The Indian team of Transcend Adventure put 6 members on the summit along with 10 Sherpas. These were the first non-Sherpa summits of 2017.

Transcend is an Indian owned adventure company with offices in Kathmandu. They run climbing trips and helped the youngest woman to summit Everest, Indian Malavath Purna, 13 years 11 months on May 25,  in 2014 from the north side

This year they have 23 teenage members with an equal number of Sherpas. Three of their young climbers have left the expedition for personal or health reason. The Sherpas, who also work with Arun Trekking, fixed the ropes to the summit a few days ago.

Transcend posted on their site that they were leaving for the summit late night 12 May from Camp 3. They were reported reaching the 2nd Step around 2:00 am. They told me the winds picked up in early morning between 3  – 5 am but otherwise were not an issue. Their home team does not report any injuries or issues and said half the team was back at ABC by 6 pm with the rest not far behind.

6 Climbers from the Transcend Adventures Indian Team have reached the summit of Mt. Everest along with 10 Sherpas as listed below. Every climber and sherpa have returned safely returned to lower camps. 3 Climbers have already reached ABC and the rest will reach in about 2 hours. Transcend Adventures once again salutes the lifelines of Himalayan Climbing: The Sherpa People.

There were 10 Sherpas that summited:

It has become very popular for expedition operators to take teenage Indians on Everest expeditions. They receive a lot of publicity before and just after their climbs, but it is unclear that this moment transfers to longer term advantage.

these are stories that need to be told daily wage labourers in india earn as much as the porters do on the trail to EBC this boy is a living example of the opportunity in adversity in india today the nonlinear growth and expectations that india has amongst its poor and underprivileged. Everest is a means to climb out of social inequalities. Everest is much more for some among us over others.

Congratulations to the members and their Sherpas for staying with it during some challenging conditions. The next team of Transcend climbers should head up as soon as possible.

North Teams Move Up and some Sit tight

As I have mentioned several times this week, the weather on the north side has been calmer than on the south, but the uncertainty of how long the winds will stay away kept some teams from even trying yesterday. But others are moving into position for their summit push.

Still no news on the weather. We know an expedition made it to the summit this morning so the first success has already come in. The winds look high for the next few days and we might even descend back to the village again.

Today I went for a two hour walk with some friends down to some tents where local Tibetans sell food and trinkets. I was hoping to resupply on some snacks but they only really had tea and beads.

On the return I took this video of base camp and you can see it’s a bit windy. I’m not too concerned about the weather since we have plenty of time at the moment. Our expedition usually is one of the last to summit and although no one likes waiting this is all completely normal.

A number of other teams had moved up the mountain earlier this week with a view to making summit bids on 15/16 but the weather forecasts are now showing strengthening winds, so it’s not certain if we’ll see more summits tonight/tomorrow or in the coming days. Conversely, other teams, including the large Chinese team, had retreated back to base camp and below.

Climbers on the Nepal side are anticipating leaving soon for their summit bids. One team left today from Everest Base Camp. Many are returning from their down valley rest in local villages and other spending the days at EBC taking day hikes.

The fickle weather forecast is making any prediction practically worthless however, 16/17 May seems to be a brief window. After that there are hopes of more stable weather after 20 May.

Jim Davidson with IMG reported going up to Pumori for a nice photo op of Everest: 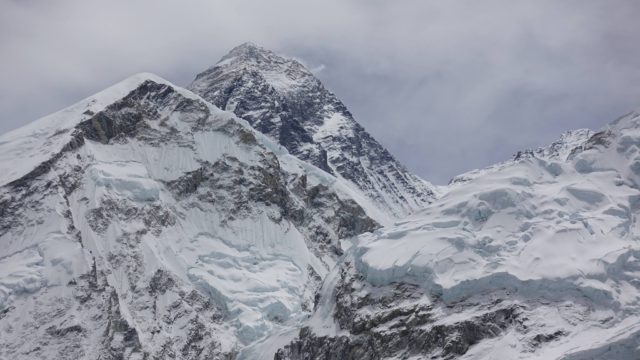 Everest 2017 from Pumori by Jim Davidson