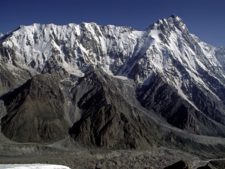 The Karakorum season is off to a sad start with multiple deaths. Meanwhile teams are hoping for Monday summits on Broad Peak and others reach Camp 1 on K2.

After a helicopter search found avalanche debris at the last GPS transmission point for the Spanish-Argentinian team of Alberto Zerain and Mariano Galvan the search has been halted. The last transmission was on June 24th.

Desnivle posted this statement from their home teams:

After two flights inspecting the entire edge, the helicopter has returned without finding any trace of the two climbers . Around 03:00 am (0600 p.m., Pakistani time), the first helicopter flight of the army began in a new attempt to search for alpinists Alberto Zerain and Mariano Galván. The reconnaissance was carried out in two phases, with a stop in between, at 06:00 a.m. (09:00 p.m., Pakistani time) to refuel and continue the search. The helicopter has crossed the edge several times, arriving to fly until the 7,400m of altitude, to fix its focus, in the second flight, in the penultimate and last known position of Alberto and Mariano, without success. In that last position that indicated the device of Racetracker that carried Alberto Zerain, is where they found a plaque of snow detached that ended up forming a avalanche. Situation that, sadly, leads to rule out the possibility of survivors. 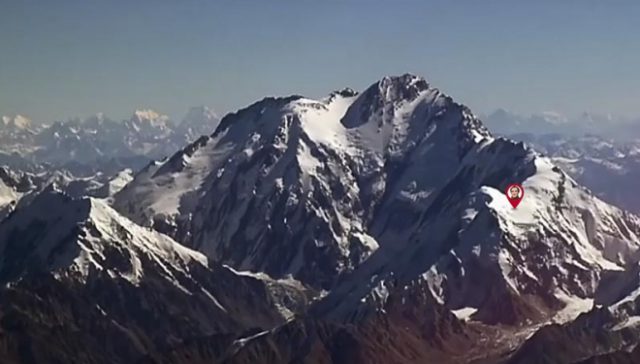 The official search has also ended for American climber Steven Beare on Elbrus. He left for the summit on June 14 alone, was due back June 16, but never checked in. Bad weather forced other teams to turn back that day and reported seeing Beare alone climbing toward the summit in close to whiteout conditions.

His wife, 11 weeks pregnant with their second child, told her local newspaper that private search-and-rescue teams are still searching for her husband and asks that people continue to pray and donate through Colorado Police Officers Foundation.

My condolences to all involved.

Teams are acclimatized on Broad Peak and looking at a Monday summit, conditions permitting. The last couple of years, deep and difficult snow conditions above Camp 3  stopped almost all of the efforts.

There are many teams and independent climbers this year so I assume they will join forces to break trail to the summit, if possible. They include: Kari Kobler‘s team, Oscar Cadiach, Grace McDonald from Canada and Furtenbach Adventures.

Rupert Hauer with Furtenbach Adventures  posted on their Monday plans:

After a few days of rest at Basecamp we received the news yesterday yesterday in the afternoon, that tents in the [Cmap] 2 were destroyed by storm. I then got up with a Sherpa at half-past four in the afternoon, and we could recover the equipment from two completely destroyed tents. It can go on !!! Tomorrow or over the morning the group comes after.

The summit is planned for Monday! 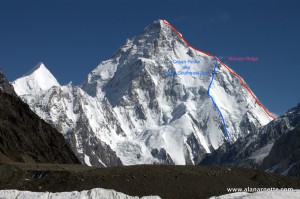 Climbers are busy on K2. British-American Vanessa O’Brien reports that she just is at Camp 1 on the Abruzzi route today.

The commercial team run by Russell Brice, Himex , posted this update on the Česen Route aka Basque Route

Today before dawn the weather looked quite bleak with spots of rain falling at BC, but despite this we decided to at least try and make some progress and so the Sherpa’s, HAP and Shinji all left at 03.30 to start the rope fixing. The gamble paid off and so by 08.30 everyone had reached the C1 site having fixed 1,000m of rope. This is actually a very small and exposed place with just enough room for two tents so we do not actually use this. The three Sherpa’s continued fixing another 350m of rope towards C2, but by this stage the snow was to soft and deep so they deposited the remaining equipment and rope before retreating back to BC for a late lunch. The route is now about 500m below C2 and our surprise package which we are eager to reach.

The day actually turned out to be relatively clear with long sunny periods in the morning but as the afternoon has progressed the upper sky has filled in with more threatening looking cloud, so again although we are planning on reaching C2 tomorrow we will have to wait and see what happens in the morning.

On the other side of the world, the Denali 2017 season has been a hard one with difficult snow and weather. The National Park Service reports a 36% summit rate, which would be the second lowest since 2000.

It appears the Denali summit window is narrowing based on the last few years. Late April/early May is horribly cold and into July, dangerous crevasses open thus early June is the sweet spot, and of course the crowds.

Ok, the season moves forward. Sadly deaths are part of high altitude mountaineering and this season is proving no different.

As always the weather will control safety and summits. Hoping for a good season.