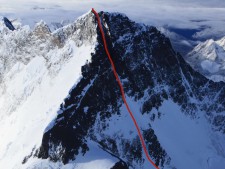 Moinz/Benegas summited Lhotse a day after getting Everest. This is the 4th 800er for Matt: Cho Oyu, Makalu, Everest and Lhotse.

Reports are now coming in of strong wind gusts. I asked Chris Tomer of Tomer Weather Solutions for his view on what was happening:

Doesn’t look jet related to me so the gusts will pass.  Could be a 3 to 6 hour spike.  Then much lighter into Tuesday.  My best guess is some spin in the middle of the atmosphere. In more general terms, the best summit window of the season is winding down.  If the summit door was wide open last week then it’s starting to slowly close.

Seven Summits Treks had one of their three VVIP members who paid $130K summit:

This morning one of our VIP member Mr. Li Jianhong climbed Mt. Everest along with two more Chinese members Mr. Lyu Jun and Ms. Qu Jiaojiao between 5:30 to 5:50 AM. Ms. Qu Jiaojiao also climbed Lhotse on 20 May together with Jian Chang (China).

IMG reports they had 10 members and 13 Sherpas support staff on the summit.

It’s actually amazing that there are any climbers still left on Everest given there have been summits every day since last Saturday, 12 May, over 500 combined from both side now. But once again, several other teams are staged at the South Col and C3 on the North for early Monday 21 May summits. Many are climbing NOW!

Look for more summits, a lot, early Monday morning with teams including:

Namaste, gentlemen. I’m in c2 now. I’m going to take a day here today and I’m going to get up tomorrow. I have a slight cough and the cough and fever in the first half of the (Expedition) are almost gone. I think I have a chance now. Perhaps the day after tomorrow I will see the appearance of lì chéng from-Camp. Anyway, I’d like to concentrate and be careful and carefully. Thank you all for your support.

Horia Colibasanu and Peter Hámor are at C2 on the Nepal side hoping to summit via the West Ridge then traverse to Lhotse. They are concerned about the incoming weather since they need several days. Not looking good for their effort as near the end of the season. Their last post was Friday, 18 May:

Horia and Peter are presently at the advanced base camp (ABC), after a climbing attempt. Due to a high risk of avalanches, they returned to 6,400 m. For this year’s project, the two of them need a 4-5 day window of good weather.

Peter and Horia couldn’t continue through the couloir to the West Ridge because of the great amount of snow. They are back in the ABC.

Tenji and Jon Griffiths, have been working hard and even doing a dry run for climbing to the summit of Everest by the normal, Southeast Ridge route, then return to the South Col and on to Lhotse back to back without supplemental oxygen. The no Os part of this is why its special plus it was supposed to be live stream over Nat Geo channels. But the team has gone mysteriously silent. Tenji Sherpa posted a few days ago: “Acclimitising is over now!!! waiting for good windows for final push” I have a message into them trying to figure out whats going on.

OK, on to the next wave. I’ll update as I get info.