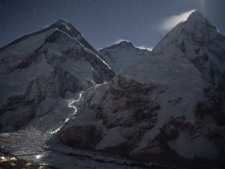 Good news from the Tibet side, the fixed lines are in to the North Col and one team has already slept there. Monday brings a few concerns on the world’s highest peak.

Comments from experienced guides on both sides of Everest that may suggest this will be a challenging season high on the Hill. While we see these concerns occasionally throughout the season, everyone knows with a month to go here, it is still a long, long time and anything can happen.

Always a crap-shoot to predict the weather on Everest. If all you did was look at the websites for free Everest weather forecast, you might decide to go home because many forecasts were converging indicating big winds starting late in the week. But this is where investing in a human to help interest the data yields a different conclusion. I asked two Everest weather experts for their takes. My thanks for their expert contributions:

Hi Alan, Tropical Cyclone Fani continues to churn into the Bay of Bengal. Potential impact is targeting the eastern edge of the Himalaya including Everest, Makalu and Kanchenjunga between Friday and Sunday. My confidence is medium with the track continuing to shift. The main impact appears to be increased chances for snow accumulation between Friday and Sunday. Fani’s primary wind field completely misses Everest, Makalu and Kanchenjunga, so we’re just dealing with the standard wind from the jet stream. At this point a snow forecast is really a stab in the dark, but if the current track holds then we’re looking at roughly a foot of snow accumulation. Lesser accumulation results from an eastward shift in the track; more accumulation with a westward shift in the track. Summit temps appear to warm a little as Fani moves through. High pressure could build back into the region around May 8, which would move things back to “business as usual”.

I just looked at the forecast models and made my 7 day forecast for Everest with the focus on the impacts of the tropical storm. Then 10 minutes later I was forwarded the forecast discussion from Meteorologist Chris Tomer and I have to say I’m in totally agreement with his forecast and analysis.  Snowfall totals I also agree with the term “stab in the dark.” The only thing I would add is Everest North side tends to get more snowfall than the South side. I would put possible storm totals for the Everest North side for the period Friday to Sunday of up to 16 inches ( 41 cm) with heaviest snow on Saturday.

So, the good news is not a huge wind storm like we thought may happen, but the bad new is 16inches/41 cm of snow!!!! Whoa! In any event, the smart teams will take advantage of this rotation as it may be the last before a long wait and a quick summit push in a narrow window.

With all this talk of weather, I thought I’d share a couple of impressive photos taken by climbers on both sides. First is from Elia Saikaly of the Milky Way from EBC. He specializes in time lapse images plus makes some amazing videos. 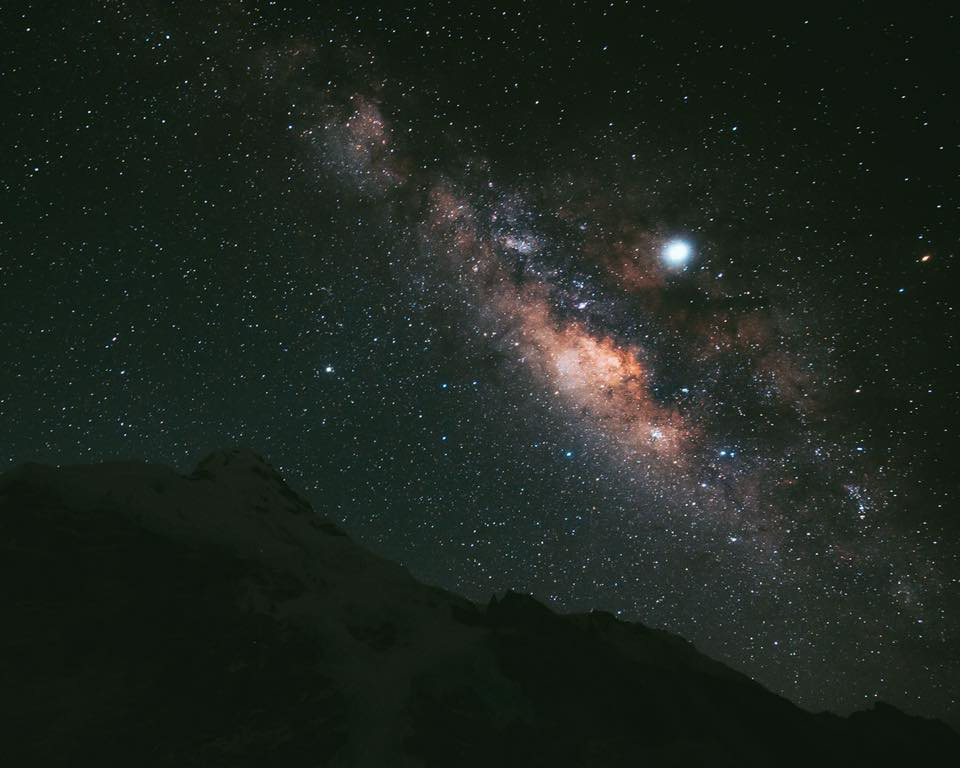 Milky Way from 2019 Everest Base Camp Courtesy of Elia Saikaly

Next is of climbers in the Icefall a few nights ago. Taken by Eric Daft from Pumori Camp 1 and posted by Tim Mosedale 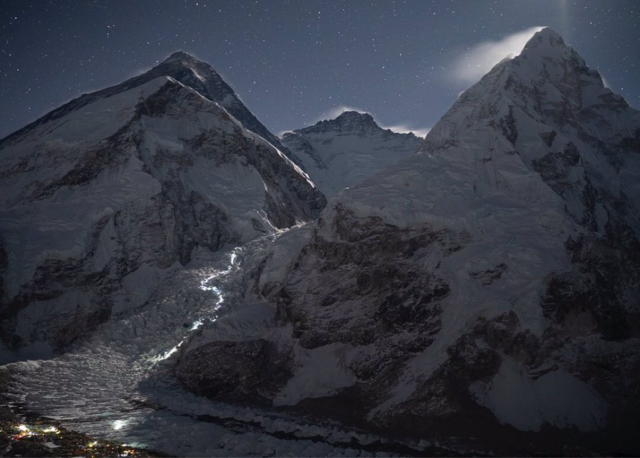 Adventure Consultants reported that the guides got together on the Nepal side to compare notes and plans. This is a crucial part of managing the crowds.

There was also an expedition leaders’ meeting this morning, which was really good to meet other Guides and get an update on how things are progressing on the mountain. Strong winds high on the mountain, cyclones forming in the Bay of Bengal, rope fixing above Camp 3. These are the things now coming into consideration. 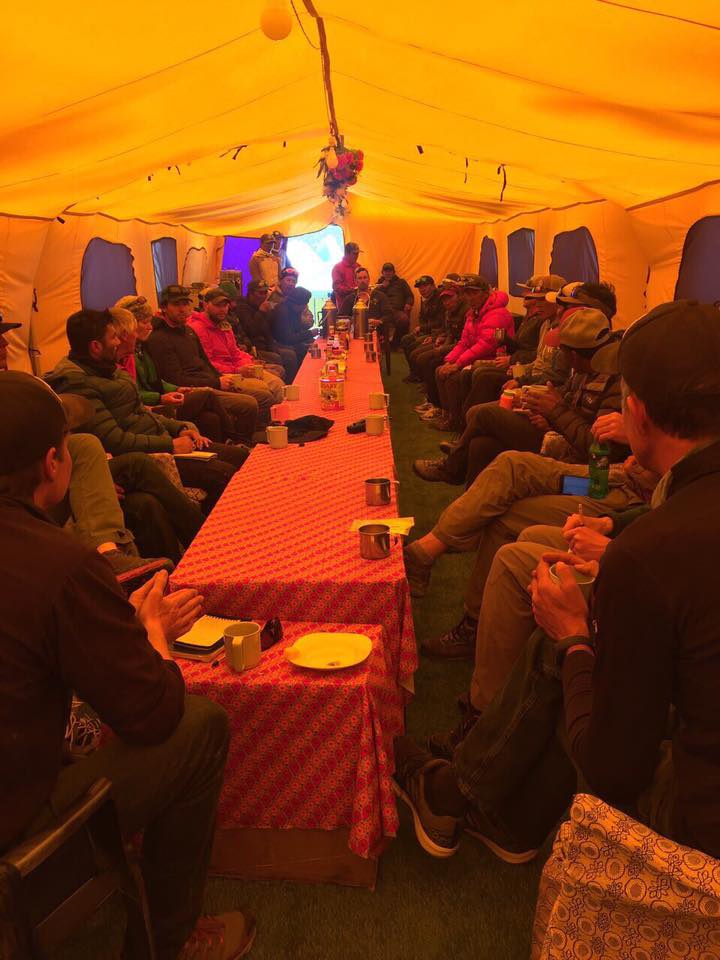 Teams 1 and 2 are currently in a holding pattern at Everest Base Camp as there are high winds aloft. Both teams are looking towards their next rotation which will take them to Camp 3 which is considerably more exposed to wind. Both teams are waiting until we see a better weather window in the forecast, so they will be able to spend the night at Camp 3 which is the next step in their acclimatization.

Oh, and in terms of what’s happening on mtn this season, i don’t want to pretend I’m not concerned about a potential difficult season – if medium term forecast models confirm and jet sits on mountain until after May10, that is gonna make all of our jobs very difficult …That’s what I’m concerned about

Adrian went on to talk about the route that is now open to the North Col:

Adrian here from North Col. Alpenglow 8 members and 5 Sherpa first of season to spend night here after Tibetan rope fixers opened route today. Condition of route to North Col feels good – steeper than past years, but more direct. Slabbiness of snow felt “normal”. 2 seracs to be respectful of on route, one at Base face,one 3/4 of way up. They go quickly. Ropes are to 7200m…we may go a bit higher tomorrow

New Route Update – Touched the Base

Cory Richards and Esteban “Topo” Mena, arrived at Chinese Base Camp about a week ago and are getting settled in and inspecting the route. They made a trip to ABC and gave this update:

As a team, we made our way from Basecamp to Advanced Basecamp with a stop in between at Interim Camp. Maneuvering from Interim Camp to ABC requires us to hike up the “Miracle Highway”, seen here in Keith’s video. This upheaval of land is what makes it possible to pass through an otherwise dangerous landscape of unstable ice pinnacles, thus giving it the name of a #miraclehighway

And they touched the base of the New Route! It starts just outside of ABC.

We finally got to touch the new route today and work the bottom crux. It was hot. And it was hard. But then again everything is at 24,000ft (7300m).

Roam Media posted episode 3 of the Line Series. In this episode, Cory discusses his mental health challenges and we meet Topo. Powerful. Cory gives an introduction to the episode:

This episode could be the most near to my heart, for it explores my lifelong battle with mental health. 10 months into training, I noticed I was cycling through different levels of confidence the closer I got to leaving. The reality of the fatigue of the goal coupled with my questions about motivation, could make my efforts fray. Though this may be where I need to be, it also runs the risk of playing with my mind in an unhealthy way. Battling the psychology of superstition + fear – I’m thinking about death every day. I’m left with thoughts like, “Am I wrapping up the loose ends before I ‘go out to battle’ and … not come home?” I hope this episode helps give voice to the many people who battle similar psychological challenges every day. Please take a watch.