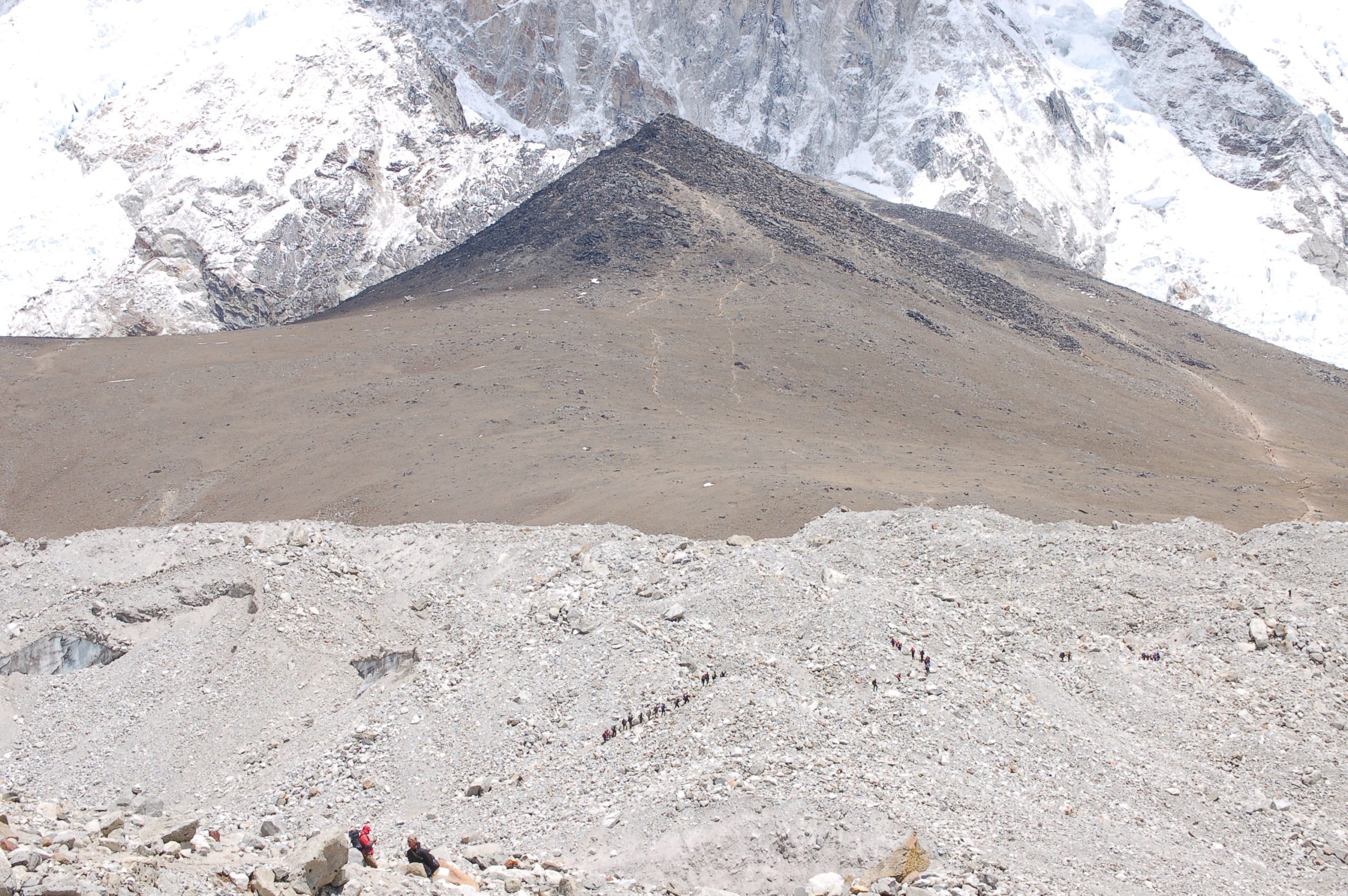 Kala Patar at 18,209-feet serves as the highest point most trekkers will ever reach. Everest Base Camp is about 17,500-feet. So when the team summits Kala Patar, many consider it their “Everest.” Our fictional team arrives at Everest Base Camp tomorrow.

The team left Lobuche early taking only a couple of hours to reach Gorak Shep, the last village before Everest Base Camp. The trekkers were excited, today, they would get their summit.

For many trekkers to EBC, Kala Patar is their summit. Almost an inconsequential hill in the context of the Himalaya, it offers an amazing view of Everest, especially at dawn or sunset. It is 18,209-feet and offers an unobstructed view of Everest, perhaps the best from the Nepal side.

“How hard will it be,” Trekker asked Dawa. “We will go slowly, slowly – bistari, bistari.” He replied lowering his hands, palms down. Trekker smiled at his fellow trekkers as they left their Lodge in Gorak Shep. They could see a big hill but not any sign of a true summit. They would need to gain 1,267-feet from the lodge to the summit. 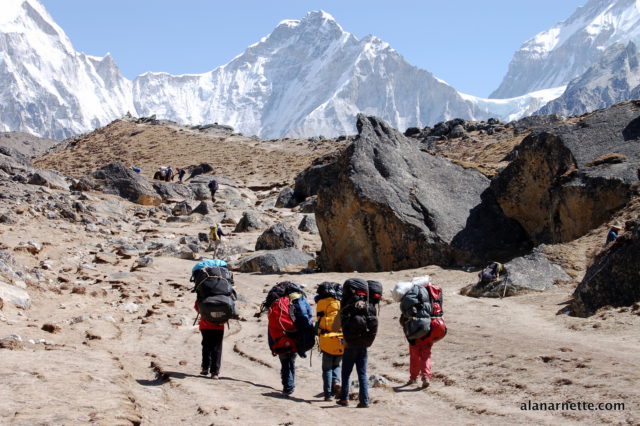 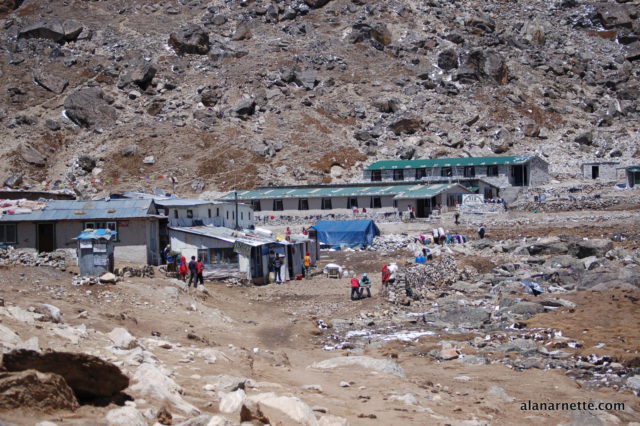 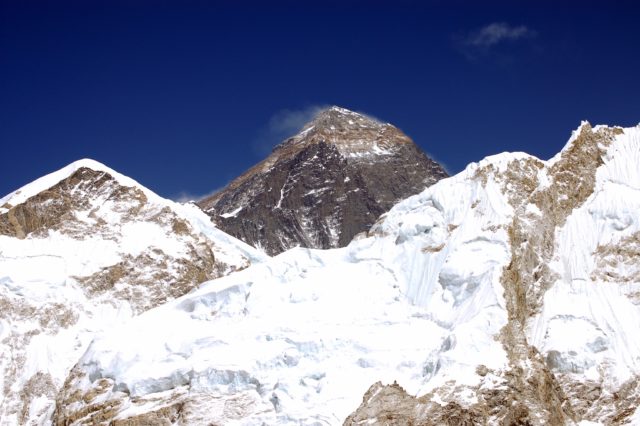 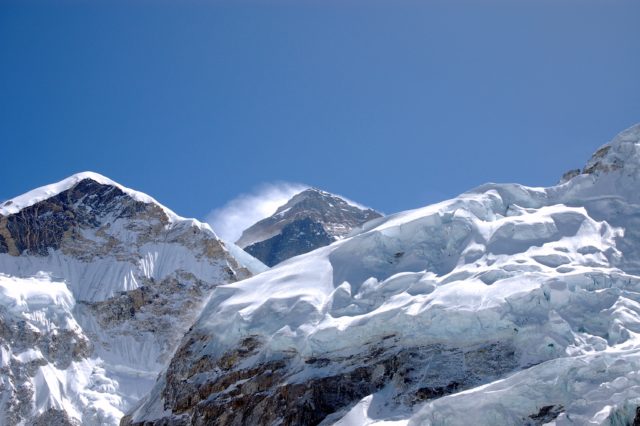 As a group, the climbers, trekkers, Guide and Dawa crossed a frozen lake and began the gradual hike up a barren hillside. They passed by a young man, holding the reins of a horse, ready to sell rides to the top for a reasonable 350 rupees! They were expecting a four hour round trip. Half an hour into the hike, Old Man spoke up, out of breath “It must be the altitude.”

“Look,” Dutch said pointing to his right, “Everest!” They could just see the top of their ultimate objective peaking over the West Shoulder. Even though they saw Everest from Namache Hill, the Everest View Hotel, and on the trek leaving Namache, knowing that base camp was just two miles away and they would soon be in the Icefall, everything was different now.

Suddenly the calm day turned windy. It was cold. “Glad we packed extra jackets.” She said, “Well it is the mountains after all!” Snorer chided her.

The trail was hard-packed, dense with peat, void of grass. Rock and boulders decorated the landscape requiring a random boulder scramble that kept it interesting. It wound back and forth in a lazy switchback. They topped out on a false summit. The trekkers were strong, they led the hike.

As they crested another rocky outcropping, they reached the summit, a summit covered with prayer flags spreading goodwill and positive energy on the winds. There were 50 or more people standing on the broad summit. All with huge smiles, cameras clicking, generous hugs.

It was a clear day so the view of Everest was stunning. “Me and Everest.” Trekker declared with a huge smile as he had his picture taken by Loner. She gave him a huge hug. “Congratulations.” She said as he began to tear up.  As they stood on the summit, the prayer flags fluttered so hard in the wind that they looked as though they might fly away.

She moved to lean against a rock, steady herself against the winds. She wanted a good look, to take it in. Her survey revealed Everest. She could clearly see the South Summit, Nuptse, a bit of Lhotse. The Khumbu Icefall was in clear view as was Base Camp. As She looked back down the valley, Ama Dablam stood proud. Her head dropped as She pondered what She was seeing, what She was attempting. She thought of her husband, her kids.

She looked at Everest as a climber, not as a trekker.

Then for a moment, the winds calmed.

Guide spoke to no one in particular, “I’ve been doing this trip for 10 years now, and it never gets old and is always a thrill. The view of Mount Everest does not get any better than from here, no wind, for now, and clear skies. Cannot be beaten. For me to look up at the summit and think of all the time and effort I have spent over the years on that beast, brings me so much emotion it is hard to put into words. But I can promise you this, the connection you make after you summit Everest is a bond that will last forever. I take pride in sharing what I have learned, what I’ve experienced. Mountains are harsh, unforgiving of mistakes, but also rewarding. Every trip I return home a better version of myself.”

As the team returned to Gorak Shep, Dawa announced, “Good news, the Icefall Doctors have the route set to Camp 2 in the Cwm.”