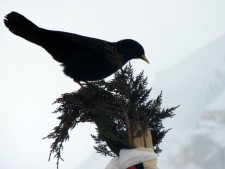 The Khumbu Icefall is known as a dangerous place. The 2,000-feet of giant ice blocks can move up to three feet a day. Massive seracs hanging off the walls of Everest’s West Shoulder and Nuptse can release at any time falling onto the Icefall. If there are people there, there is little chance of surviving. On April 19, 2014, this exact scenario occurred taking the lives of 16 Sherpas. For some guides, they choose not to guide on the Nepal side and only on the Tibetan.

“There will be no climbing today.”

Dawa and Guide walked into the dining tent at Everest Base Camp. The entire team plus the trekkers were there.

“On Friday, April 18, 2014, six years ago, at 6:30 am part of the ice serac that is on the West Shoulder of Everest released. There were Sherpas in the Icefall. A ladder had collapsed and the Icefall Doctors were headed there to replace it. The Sherpas, ferrying gear to Camp2, choose to stay there, most not wanting to return to base camp. With no warning, a deluge of car and house-sized ice blocks fell directly on top of them.” Dawa paused, remembering his brother who was there that day.

Guide picked it up, “16 Sherpas lost their lives that Friday. Now each year on April 18, all activity pauses to honor our family and friends. While everyone seems stoic, focused on their jobs; there are tears just below the surface.”

She lifted her head and glanced around the table. Everyone was silent, taking in what they just heard. “I’m so sorry Dawa about your brother.” She said softly. He nodded without looking up.

Just as She felt at the Climbing Sherpa Memorial a couple of days ago, She struggled with a range of highly mixed emotions. Is it fair to ask the Climbing Sherpas to do the work they do? Are they paid enough to compensate for the risk? Who takes care of their families when an incident occurs. Should anyone be climbing these dangerous peaks anyway? The questions were not new, they have been asked since the days of Mallory and Irvine. And many of the answers remain unchanged.

“Did anything change after 2014 for the Climbing Sherpas?” Snorer asked. Dawa tried to explain the complexities of the Nepali government, politics, ethnic issues, jealousy. He said the families of the 2014 tragedy received $5,000 from the Nepal Government, a huge sum of money in this impoverished nation but it created significant ill will towards the Climbing Sherpas from other ethnicities throughout Nepal. Also, life insurance was increased to $16,400.

The Climbing Sherpas ended the 2014 season a few days after the tragedy. They created a list of demands for improved working conditions for the government, but almost none were approved. The list included:

Dawa continued, “You see the real problem is that the Nepal government is always in transition. We have a new Minister of Tourism every couple of years, and that person does not honor the rules put in by the one before. So we start all over. Also, Climbing Sherpas are viewed as rich people. We are Buddhist, and most government officials are Hindu, so there is another difference that makes understanding difficult.”

The loss in 2014 was unparalleled and reached deep into their culture. The elder Sherpa were devastated by the loss of life. Everyone knew someone who died in the Sherpa community. And then the earthquake occurred a year later in 2015, that took another 11 Sherpa lives, all at base camp, when the avalanche hit.

Dawa added, “Yes, we Climbing Sherpas have a choice. We can choose not to climb, but there are not many options for most of us if we want to live in the Khumbu and other valleys.”

Old Man was deep in thought as he listened to Dawa. He was on Everest last year and drew on his experience, “You know that serac is still up there, has been for decades, if not centuries. I understand there is a huge piece just hanging on by a thread. All the Autumn expeditions got scared last year and left. But it hasn’t fallen.  Should we not risk going through the Icefall this year.” He was correct. He knew how slow he was last year and this year he felt slower. He struggled to get up Kala Patar. But they were there and committed. It felt too late and too early to give up now. “We will go earlier than usual, leaving EBC at 2:00 am when everything is frozen. Try to go fast. Few breaks. Be efficient.” Guide lectured the climbers. “Also, this year, we will use helicopters to ferry the ropes and anchors for the fixed-line from C2 to the summit instead of having Climbing Sherpas carry them. That will reduce the exposure by hundreds of loads.” Dawa nodded.

The couple held hands tightly as they went back to their tent. Snorer and Old Man felt stiff, tired, that they shouldn’t be here. Loner, who had made a friend in Dutch, walked back to the tent area. “Man, that was tough to hear,” said Dutch. “I can’t believe Dawa lost his brother.”

She crawled into her tent. She had pictures lined up in the mesh storage walls. One by one She looked at her kids, her husband. She had one picture of the family on a beach, all four of them, laughing, so happy. She remembered that time like it was today. She took the satellite phone out of her duffle and pressed #1, preset for her husband.

The Juniper Fund provides funds to affected families to cover the cost of living expenses for years after the loss of a worker. They “To support and empower families and communities impacted by the loss of Himalayan high-altitude workers.”