One of the most poignant moments on the trek to Everest Base Camp is at Duhgla Pass in an area known as Chukla Lare. More than 50 rock chortons stand silently honoring those who have lost their lives on Everest, mostly for the Climbing Sherpas.

The Mount Everest Guide’s team spent an active rest day at nearly 14,500 feet in the village of Dingboche with a walk to take in seldom seen sides of two famous peaks: Lhotse and Ama Dablam.

Dutch and Loner especially wanted to see the South Face of Lhotse Peak. This impressive mountain wall has only been used three times for successful summit bids, the last in 1990. They walked by a memorial to three Polish climbers who died attempting it including the Polish Alpinist legend, Jerzy Kukuczka. For the past several years an amazing team of Koreans led by Hong Sung-Taek have given it their all but have come up a bit short of making the top. It is steep, full of hanging seracs and is avalanche-prone.

The other peak they wanted to check-out was the North Ridge of Ama Dablam. By now the team had many pictures of the Southeast Ridge they saw while trekking out of Namche, but the other side is a totally different mountain. It is steep and full of cornices. It has only been successfully climbed 103 times with the last in 2007. This compared to the more popular Southeast Ridge which had been used for 4,327 summits. Recent attempts were stopped by the very last section that is full of loose soft snow.

“Look at that ridgeline,” Dutch said. “I can see why no one has summited recently, It looks like soft ice cream.”

The next day, the team left for Lobuche, taking the hill next to Dingboche, they hit their highpoint thus far on the trek at 16,500-feet before dropping back down all the way to one building village named Duhgla. They stopped for pastries and coffee before climbing almost 1,000-feet to the Pass.

Taking a wide trail, almost like a road, up from Dughla, the team crested Dughla Pass at 16,000-feet onto an open area filled with rock chortons or memorials. The area is known as Chukla Lare.

She paused, knowing the memorials were here from her research but was still shocked by the sheer number. She went over to one of the closest on her right. The name plaque read “Scott Fischer,” another “Passang Sona Sherpa.” She began to walk the line of stone memorials, trying to read each name. Most were Climbing Sherpa. She reflected on what it takes to climb Everest and the sacrifices these men and women show each year.

But She had another mission. Before She left home, She received an email that read in part “can you see if his memorial is still there?” This email was from the 80-year-old Father of a fallen Everest climber. The rest of the team had moved on towards the next stop at Lobuche, but She stayed behind. Passang, one of the Climbing Sherpas stayed with her. The Father’s request was on her mind.

Many of the monuments had new bronze nameplates. Most had worn away after years of wind and rain. Some were famous – Scott Fischer, Babu Chiri. Most were not familiar. Names long since forgotten by the climbing community. Names remembered daily by their families. 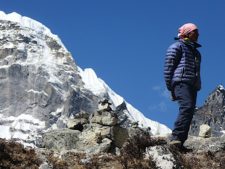 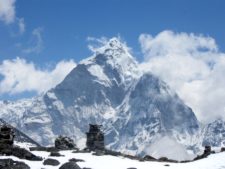 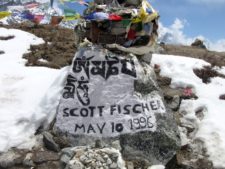 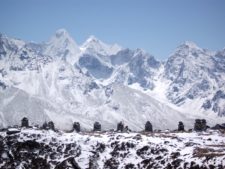 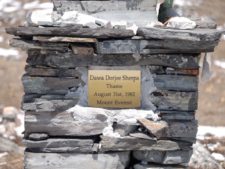 She stopped at each one. How did they die? Weather, health, accident? It did not matter.

There were climbers from many countries: Belarus, Japan, Austria, Canada, Nepal. Most were Sherpa. Most were young.

Climbers following their passion. Chasing their dream. Doing a job. It did not matter.

She said aloud, “I’m sorry Sir. I never found Greg’s memorial. But I am sure his memory lives on.”

Who, how much, and how often you donate is a personal decision. Maybe you climbed with one of the guides, or plan to one day. Perhaps you have followed them for years and want to support their Sherpa team, or maybe you support by geography – Nepali, American, Austrian, British, New Zealand. It’s up to you and will be much appreciated.