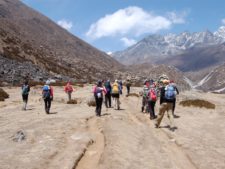 The fictional team is getting closer to Everest Base Camp. Now on their way from Deboche to Dingboche for two nights, then to Lobuche and Gorak Shep where the trekkers will get their “Everest,” the 18,514-foot peak, Kala Patar. They should be at Everest Base Camp at the end of this week.

Virtual Everest 2020 – Support the Climbing Sherpas is a joint project of Alan Arnette and several global guide companies. Our objective is to entertain Everest fans during the Coronavirus spring closure and raise money to help the Sherpas who were not working this spring. While there will be accurate historical references, this series is a work of fiction. Names, characters, and incidents either were products of my imagination or were used fictitiously. Any resemblance to actual events or locales or persons, living or dead, is entirely coincidental. Please join us by making a donation using the links below plus by adding your Everest experiences in the comment section.

Dutch stood still, staring at Ama Dablam as they got up early at the Riverdale Lodge in Deboche. “I would like to climb that one day.” He said to Snorer, Loner, and Old Man. “Me too,” said Loner. They all looked at him. He had only made two comments the entire time they had been together, both about mountains and climbing. “I understand it’s a combination of rock, ice and snow climbing, all at a moderate altitude.” Snorer added. They threw their day packs on their backs and left the Lodge in a single file line. It had snowed last night so the trees had a nice white coating that muffled any sounds. 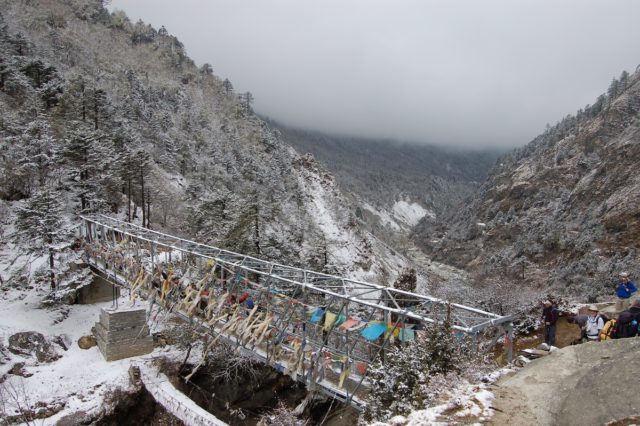 Crossing a bridge over a small stream, the team of climbers, trekkers, and Climbing Sherpas started to gain elevation. After a few hours, she noticed something, “Hey, where did the trees go?” She asked rhetorically. They had left treeline and now were following a narrow dirt path made by perhaps millions of steps over centuries. The Khumbu valley was believed to have been settled 350-years earlier by Tibetans. Along with Rowlang and Khanbalung valleys, it is considered a sacred place. Many of the Climbing Sherpas who support climbers live in these valleys.

She told the group what she found on Wikipedia before she left home, “According to Sherpa’s oral history, four groups migrated from Tibet to Solukhumbu at different times, giving rise to the four fundamental Sherpa clans: Minyagpa, Thimmi, Sertawa, and Chawa. The four groups gradually split into the more than 20 different clans that exist today. At one point the Sherpas had their own State but slowly Nepal took them under government rule.”

Dutch asked Dawa, “Why do the Sherpas risk their lives on Everest for us.?” Dawa stopped and looked over the barren terrain towards Dingboche, “Climbing is what Sherpas do. I will guide as long as I physically can in order to support my family. Guiding Everest is one of the most lucrative jobs in Nepal, next to being a Government official. But my parents, and my wife, are adamant that my brothers and I stop guiding on Everest. I want a better life for my children. Like my parents, I don’t want them to be a mountain guide. Maybe on lower mountains like Ama Dablam or Lobuche or trekking, but not on Everest. It’s too dangerous. They are in boarding school in Kathmandu now. I can only pay for it by guiding on Everest. But I want them to go to college and maybe be a doctor, an engineer or something else.”

The entire group had stopped to listen to Dawa speak. “OK, let’s go.” He said as the group reformed their single-file line on the dirt trail. They tried to avoid stepping on the fragile tundra. Yaks passed them returning from base camp:

The trail dropped down towards the Imja Khola river, one of the primary drainages from the Khumbu Icefall and Everest. They crossed a wooden bridge and started regaining elevation. Near the top of the final hill, she paused to look back. This was something she had learned on other climbs, sometimes you have to look behind you to appreciate where you have come from before you go on in order to live in the moment. She was stunned by what she saw, Thamserku 21,729-feet and Kangtega 22,251-feet. 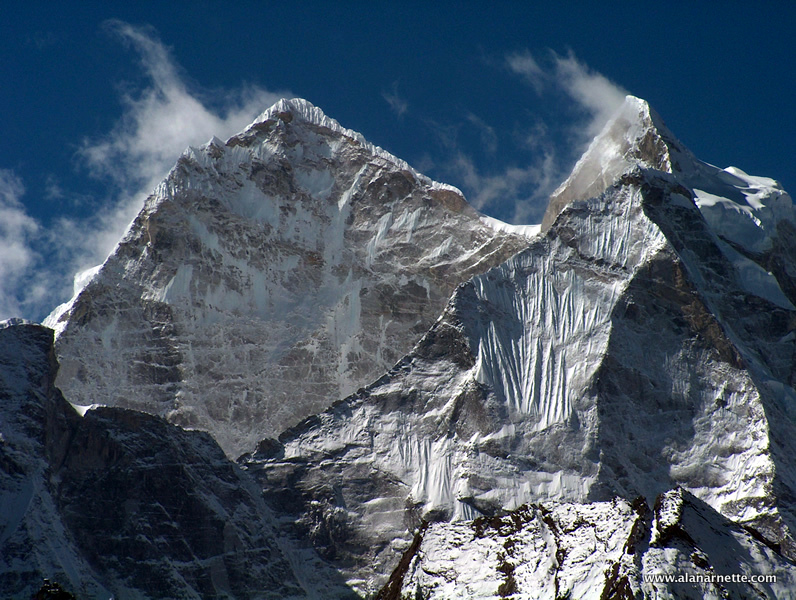 The trek in the Khumbu continued to surprise her. Every turn brought another view, every view another delight, every delight, another memory made.

One Response to “Virtual Everest 2020: Leaving the Trees”