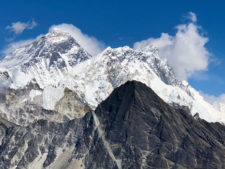 The number of permits continues to rise for Everest. Now at 290 spread across 30 teams, it appears Everest will be crowded again for this spring of 2021. Reports are coming in of low snow amounts this past winter so rockfall may be an issue, especially with so many people climbing together. We saw this same objective danger on K2 this past winter.

Base Camp is filling up as more teams continue to end their trek. They are taking a few days to rest and brush up on skills before making their first rotation to Camps 1 and 2 in the Western Cwm. Internet service at EBC appears to be spotty according to many reports I’m getting. Climbers are having to do “walkabouts” to find a signal. This happens all the time with Ncell, the mobile phone provider, but for EverestLink, it’s usually more reliable and available. I’m sure they will improve it.

There appears the be the usual profiles on the peak Many who had permits for last year, jumped at the chance to go this year.  Also, there are the “repeat” customers who have tried before and not made it for a variety of reasons and, also, as usual, there are those who are seeking to make a name by a “first.” Let’s drill down on a few.

Sanna Raistakka and Roeland van Oss are saying they will climb with no Os and “unsupported” on their Project Everest 21.  I assume they will use the ladders in the Icefall supported by the Icefall Doctors as well as the fixed ropes installed by others. I think they are suggesting no help in ferrying gear (tents, food, fuel, etc.) above Base Camp but did use porters and animals to get to EBC.

Arjun Vajpai of India, who had climbed Everest in 2010 at the age of 16, becoming the youngest Indian climber. Also French climber Pascal Denoel. Simon Ferrier-May is hoping to become the youngest Briton to summit Everest without supplemental oxygen.

The mountains are full of female climbers this spring. On Annapurna, a team of 9 supported by Peak Promotions are there including. Sophie Lavuad is leading their effort. Also on Anna are six Sherpanis: Pasang Lhamu Sherpa Akita, Maya Sherpa (also on Sophie’s team), Dawa Yangzum Sherpa, Dabuti Sherpa, Sharmila Shyangtan, Purnima Sherstha. As I noted in our interview, Maya Sherpa is going for a Sherpani 8000er record on both Annapurna and Dhaulagiri being numbers 7 and 8. Sheikha Asma Al Thani aims to become the first Qatari woman

US singer Mike Posner is going for the top. He’s made a name for himself as a pop singer with the hit “I Took a Pill in Ibiza.” Former NFL player, Mark Pattison wants to complete climbing the highest peak on the seven continents aka the Seven Summits with Everest. But he’s added Lhotse immediately after so separate himself from Craig Hannemanwho summited Everest in 2021 making him the first former NFL, NBA, or major league athlete to summit Everest.

The source I used has removed this citing so I’m unclear if it was real. This route has only been successfully used to reach the summit for only two expeditions, the American Mount Everest Expedition in 1963 by Tomas Hornbein and Willie Unsoeld and in 1986 by Canadians Sharon Wood and teammate Dwayne Congdon starting from the Tibet side.

Not sure how this category lines up but a team of 16 from Bahrain lead by  Shaikh Mohamed Hamad Mohamed Al Khalifa and supported by Seven Summits Treks is on Everest. They summited Ama Dablam and Manaslu last autumn as part of their training but it including some controversy as a video showing some members taking a helicopter to Camp 1, an interesting move since that is absolutely the easiest part of the climb. We’ll see if they bypass the Icefall like Wang Jin of China and her Sherpa team did in 2014.

Of course, Kami Rita Sherpa will be going for his 25th summit. It won’t surprise me to see him summit twice as he did in 2019 to rack up the count. And taking advantage of his age, Spanish climber Carlos Soria, at 82 is on his 12 attempts of Dhaulagiri. He needs it and Shishapangma to get all 14 of the 8000ers.

Always in search of publicity, earned or not, Colin O’Brady declared his intent to “climb Everest and Lhotse (the 4th highest mountain in the world) in a continuous push without using supplemental oxygen.” You can read the details on his IG page, but be warned once again he’s using technicalities to say whatever he is doing is a “record.” Similar to his alleged Antarctica crossing where he was taken to task by true Arctic explorers. See this NatGeo article for more. He plans to return to C3 on the Lhotse Face after Everest thus not a true “traverse” but rather a linked climb.

Briton Kenton Cool will attempt to match the record for most Everest summits by a non-Sherpa currently set at 15 by American Dave Hahn.

The youngest on Everest this spring is 19-year-old Shehroze Kashif from Pakistan.

A team from the Nepal Army will conduct a clean-up of  Everest, Lhotse, Pumori, Amadablam, Makalu, and Dhaulagiri base camps.

The Nepal Ministry of Tourism posted these foreign permit tally thus far. As I’ve noted, many teams are still arriving, and some are planning to come in mid-April, relatively late. This is probably due to the massive confusion around Nepal’s COVID quarantine and testing rules. Even with this slow start, over 300 Everest foreign permits are expected, with the Tibet side closed to foreigners.

Meanwhile, on the other 8000ers, Annapurna is up first where the summit push is underway aiming for Thursday, April 14, 2021. Mingma G said “14 April is Nepal’s New Year 01-01-2078 and on this auspicious day, the team will make Annapurna summit.” Pakistani climbers Sirbaz Khan and Abdul Joshi are reported at C2 at 5590m.

And 82-year-old Carlos Soria is on this 12th (yes twelfth) attempt of Dhaulagiri. He only has it and Shishapangma to complete climbing all fourteen of the 8000-meter peaks.

Also on Dhaulagiri are Carla Perez and Topo Mena. Cory Richards was with them but has left the expedition for unannounced reasons. They wanted to climb the previously unclimbed northwest ridge. Now that appears to be at risk. Meanwhile, Slovak-Romanian team lead by Peter Hamor with Marius Gane and Horia Colibășanu will attempt the North-West ridge and then descend along the North-East ridge.