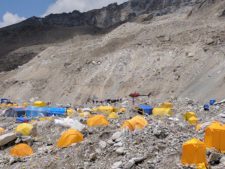 The Everest 2021 season is right on track with teams pouring into base camp. However, this year remains different with few trekking teams on the trails resulting in almost empty teahouses and some closed, perhaps forever. Remember that the Tibet side is closed to foreigners and I don’t expect updates from the Chinese team or two that might climb this spring.

As far as COVID goes, don’t expect to read anything negative. The Nepal Ministry of Tourism is clamping down on any negative press this season even though Nepal just logged 303 new cases taking the total to 280,028. The epi-center is in Kathmandu which saw 128 cases logged in the past 24 hours. The death toll nationwide has reached 3,040. According to the Ministry of Health, 2,312,901 PCR tests have been conducted and 83 people are in quarantine facilities. Nepal has a population of 29 million, similar to the city of Delhi, India.

Guides won’t run the risk of saying anything that might risk their climbing permits now or in the future. And, most likely, have asked their members to maintain radio silence. So look for the real story in June when members return home and are no longer fearing repercussions from this censor. For now, we’ll hear happy talk about following protocols and frequent testing.

Some teams arrived in Kathmandu in late March, spent only a couple of days in Kathmandu then flew to Lukla to begin their eight to ten-day trek to Base Camp. Some went directly to EBC while others, like Climbing the Seven Summits, detoured to Lobuche Peak for an acclimatization climb. In any event, Base Camp is quickly filling up. Of note is that some Sherpas have been there since early March when they began to dig tent platforms, set up all the tents needed to support their groups like dining, cooking storage, and of course sleeping. At these 8000-meter base camps, each person has their own sleeping tent whereas up high, they share tents.

Arrival at Base Camp is a huge deal, they are at serious altitude, 17,500-feet, and are now beginning to experience the side effects like upper respiratory infections or the infamous Khumbu Cough. And there are always adjustments to the new food with a bout of GI problems. But all of this is normal and why having excellent medical resources available like EverestER is critical for a successful expedition.

To see where teams are now, visit my team location table

Most teams will take anywhere from three to five days to settle into their new home. They’ll use that time to refresh basic climbing skills. Note I say refresh, not learn! The Sherpas usually set up an obstacle course of sorts beside EBC with ladders and ropes. The members will practice clipping in and out of the fixed-line when crossing anchors and moving confidently over the ladders. By the time their expedition is over late next month, all of this will be second nature but for the first time, well it’s the first time for many.

Here a rough estimate of the next four to six weeks:

Many things will change an outline like this from the weather (remember last year Cyclone Fani stopped everything for a week in early May) to illness to guides calculating when other teams may go so they avoid the “rush” days.

The Nepal Ministry of Tourism posted these foreign permit tally thus far. As I’ve noted, many teams are still arriving, and some are planning to come in mid-April, relatively late. This is probably due to the massive confusion around Nepal’s COVID quarantine and testing rules. Even with this slow start, 300 Everest foreign permits are expected, with the Tibet side closed to foreigners.

Annapurna is usually the first 8000er to be summited (if it is at all) each spring. Later in the season, it gets too dangerous with avalanches and rockfall, so now is the time. With 44 climbers spread across 4 teams, there has already been a lot of movement. Mingma G, of winter K2 fame, posted the schedule on his IG account:

I am now posting background articles and interviews between now and early April when the teams arrive at the base camps. If you would like to see anything special this year, post a comment or drop me an email.

Here’s the video version of the weekend update: