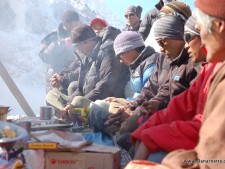 I was asked to summarize the Everest season thus far, my answer, “normal.” The fear of quarantines, extensive testing, and chaos in Kathmandu never materialized. In fact, most people flew in and out over a couple of days, shorter than usual. Flights to Lukla were about as expected, albeit with some delays for the smoke from forest fires. And the trek to EBC, well normal except that the teahouses were pretty empty due to the lack of trekkers. Now with climbers at base camp, they are ramping up for their first rotation, again pretty much on time. The only pressing issue, other than potentially a massive COVID outbreak at camp, is the weather.

Sherpas are reported to be “nervous” about the condition of the Khumbu Icefall this year. Also, the Lhotse Face is noted as a sheet of hard “blue ice.” The significance of these reports is that moving through the Icefall may be a bit more dangerous with teetering seracs and the ever-present danger of falling ice off the West Shoulder of Everest. Memories are still strong of the 2014 tragedy when 14 Sherpas lost their lives due to falling ice. As for the Lhotse Face, hard ice means the climbers will have to use precious energy to gain “purchase” with their crampons. In other words, kick into the ice rather than just stepping on it, as if you ever did.

As expected, it appears a large Chinese team is on the Tibet side establishing their base camp. China has closed Tibet to all foreigners but like 2020 they are allowing Chinese nationals to climb Everest.

The number of permits continues to rise for Everest. Now at 290 spread across 30 teams, it appears Everest will be crowded again for this spring of 2021. Reports are coming in of low snow amounts this past winter so rockfall may be an issue, especially with so many people climbing together. We saw this same objective danger on K2 this past winter.

Before any serious climbing begins for a team, the Sherpa holds a Puja ceremony. This is when a Lama comes in from a local village and prays to the mountain gods for permission to step foot on the peak, forgiveness for hurting the mountains with sharp points like crampons and ice axes, and the safety of the climbers. It’s a solemn event that is executed with a light heart.

Several teams have already had their Puja like Ascent Himalaya and IMG.

The announcement is normally made at dinner, “Tomorrow we will have our Puja. Bring your harness, crampons, ice axes, and anything sharp to the ceremony.” If you have never been to a Puja, your interest is now raised.

Breakfast comes early as the cooks and Sherpas are anxious to start the ceremony. A large stone Stupa has already been erected primarily to hold the flag pole and to hold a picture of the Dali Lama. Blankets are laid out for the climbers to sit on during the long ceremony.

The Sherpas are busy stringing the multi-color prayer flags across the camp, all centered on the flag pole at the Stupa. Soon the sounds of the fluttering flags cover the entire camp. Each flag has a different meaning: yellow-earth, green water, red-fire, white-air, blue-space.

More Sherpas are busy starting a small juniper fire. The smoke will cover the entire camp. It is hazy and fragrant. It marks the beginning of something special. This is not the last time to see this smoke. Every time before leaving Base Camp, each climber and Sherpa will pass by this same spot, letting the smoke from the juniper boughs cover them.

Everyone takes their place on the blankets after resting their climbing tools against the Stupa. Part of the ceremony is to ask forgiveness for hurting Sagamartha with the sharp points of the tools. But the most important part is to ask permission to climb the mountain and for safe passage.

The Lama begins with a low chant as he reads from the 300-year-old Tibetan prayer book. Everyone soon quiets down as the chanting occupies the entire team of Sherpas. Soon, a Sherpa laughs, others smile, the environment is respectful but not overly serious. 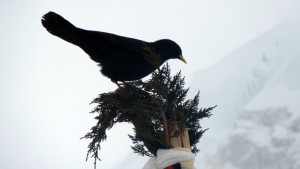 One Sherpa begins to walk around offering bread and Chiang to everyone. It is OK not to drink the firewater. The Sherpa will just smile and move on. Everyone is now relaxed as the Lama continues his chanting. A small black bird lands on the top of the flag pole, a Himalaya Chuff, it is a sign of good luck. Everyone smiles.

On a mysterious signal, everyone takes their handful of rice and throws it into the air three times, saying another mysterious chant. The Westerners have no clue, but it doesn’t matter, everyone now joins in.

The ground is hard and it is cold, Down coats were a good idea. After a while, the Lama stops and everyone gets up and walks around. All of a sudden there is a commotion all around as a Sherpa with a handful of brown powered, barley flour, spreads it all over a climber’s face. It symbolizes a gray beard and long life. Soon everyone is smearing flour on each other. 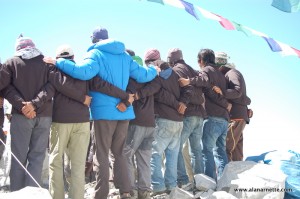 Dancing at the end of the Puja

More laughing and then the dancing starts. The Sherpas with arms around one another form line and begin a dance that would make the Rockettes proud. The climbers and trekkers join in. Another Sherpa walks around with a bottle of whiskey, carefully pouring a small amount in the bottle cap, most everyone has a taste. More laughs and smiles.

The ceremony ends with a whimper as people drift away, deep in their own thoughts as to what the ceremony meant to them. For the climbers, it might be optional, but for the Sherpas, they will not climb without the blessing.

The Nepal Ministry of Tourism posted these foreign permit tally thus far. As I’ve noted, many teams are still arriving, and some are planning to come in mid-April, relatively late. This is probably due to the massive confusion around Nepal’s COVID quarantine and testing rules. Even with this slow start, over 300 Everest foreign permits are expected, with the Tibet side closed to foreigners.

Meanwhile, on the other 8000ers, Annapurna is up first where the summit push is underway aiming for tonight, Thursday, April 14, 2021. Mingma G said, “14 April is Nepal’s New Year 01-01-2078 and on this auspicious day, the team will make Annapurna summit.” Pakistani climbers Sirbaz Khan and Abdul Joshi are reported on this push. You can follow progress at these trackers:

And 82-year-old Carlos Soria is on this 12th (yes twelfth) attempt of Dhaulagiri. He only has it and Shishapangma to complete climbing all fourteen of the 8000-meter peaks.

Also on Dhaulagiri are Carla Perez and Topo Mena. Cory Richards was with them but has left the expedition for unannounced reasons. They wanted to climb the previously unclimbed northwest ridge. Now that appears to be at risk. Meanwhile, Slovak-Romanian team lead by Peter Hamor with Marius Gane and Horia Colibășanu will attempt the North-West ridge and then descend along the North-East ridge.

5 Responses to “Everest 2021: Puja Before Climbing”