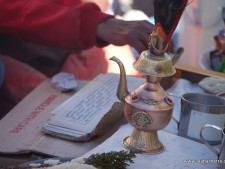 The #Everest2021 scene is quiet now with the jet stream on top of the summit. On the Tibet side, China canceled the only expedition there.

I’m getting a few reports of high winds at C3 from the last rotation, and it’s worse now. That said, look for teams to begin their summit bids aiming for May 19-23. If for next week they will leave EBC on Monday, May 17th, or perhaps this weekend:

I estimate there have been 150 summits with 350 total climbers left to attempt the summit, this includes Sherpas.

Sadly death on Everest occurs almost every year. Since 1953, only 1965, 1971, and 1985 saw no deaths when people climbed that year. There have been two deaths this season, both attributed to ‘exhaustion.’ One climber died after summiting and one back at the South Col after turning back at the Hillary Step. With all respect to families, friends, and teammates, let me discuss a bit about death on these mountains aided by statistics from the Himalayan Database (HDB).

First, the raw numbers. Since Everest was first attempted, there have been 304 death of members and “hired” (this is the term used by the HDB) for a death rate of 1.16. The rate is calculated for climbers above base camp (26,089) and not as a percentage of summits. This puts Everest as the second safest 8000er with Cho Oyu, the safest at 0.56.

The cause of death is diverse for all climbers. Most of the Sherpa deaths are from avalanches. An example would be from 2014 when a piece of the hanging serac on the West Shoulder fell onto the Icefall killing 14 Sherpas. For members, ‘fall’ is listed as the top cause of death and within that classification, 30 died while descending.

Let’s drill into ‘exhaustion’ as this one has the most mystery for many. I asked one of the leading Nepali guides why this term means to him. He said, “Exhaustion means they should have turned back before they died.” I fully agree but it’s easier said than done.

I turned back on Everest three times, 2002, 2003, and 2008. Each time I felt ‘exhausted’ with no energy. Actually, I felt empty. In each moment, I knew I could go higher, but I didn’t know if I could get back down, alive. I was with a Sherpa each time, who simply nodded their head and never tried to convince me one way or the other.

There’s a phenomenon called ‘summit fever’ where a climber loses the ability to think rationally, and often makes a poor decision. That is why it’s critically important to never climb alone on any mountain but especially on an 8000er. And always be with someone who is stronger, and perhaps more experienced than you.

Similarly developing cerebral or pulmonary edema, HACE or HAPE, puts the climber at a high risk of death. If the brain swells, clear thinking disappears. If the lungs fill with fluids, breathing will stop. In both cases, the only remedy is to descend and do it quickly.

Following these climbs since the late 1990s, I’m struck by several common themes from the death reports when available. And note, this is regardless of who they climbed with a national team, a low-end commercial, or a top-level VIP trip.

My takeaways, which are pretty basic, from this data include:

So so happy to be back to Kathmandu!! I left Base Camp by helicopter.  It’s the first time I’m “rescued”. It’s the first time I step in an ambulance. It’s the first time I go to an hospital while in expedition. And I only can say, THANKS !!I’m isolated waiting for the PCR results, I’m pretty sure about the results, but I’m feeling good! A couple of days ago, in the high camps, my oxygen saturation was very low (60% at C1 & 70% at C2)… I thought I’d lost my acclimatization due to waiting. But with the COVID test I understood why. Today they did me some tests and I’m back to 97%!! Thanks for all the messages. It’s been impossible to reply because of my connection, but I feel so blessed. Love you all so much

Xinhau reports that the Chinese have called off their summit effort due to fears of intermingling with climbers from the Nepal side. I guess they felt the “EverestWall” wouldn’t actually prevent the spread of the virus amongst people with their faces covered by oxygen masks.

Topo Mena and Carla Perez have left Dhaulagiri. Topo made this thoughtful post.

Coming down a big mountain involves leaving something up there and taking some down… sometimes one leave a part of one’s soul that won’t be recovered until coming back next time, sometime one leave tears, ilussion or all spiritual burdens behind… sometimes you bring new dreams, new friends or simply you bring an aura of happiness…
but what never leave and always bring is the TRASH❗❗❗😅 To the last little bit of plastic, human waste (try “wag bags” like for dog’s poop but way stronger) and as many possible trace of our life up there as our strength and motivation allow!!!
It’s never perfect, but trying our best just like we try to get to the top makes an unbelievable difference. 😁😁😁
The last 48h of recovering the body from the normal wreckage of coming down from a summit attempt have been amazing with momos, real coffee again and lots of naps!

Carlos Soria is still at base camp avoiding the risky environment at Kathmandu.
Alan
Memories are Everything

One Response to “Everest 2021: A Look at Deaths on Everest”