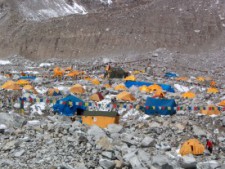 Furtenbach Adventures canceled his entire #Everest2021 expedition citing COVID risks at base camp. This follows the Chinese decision to cancel their only team on the Tibet side. Meanwhile, the officials responsible for the safety of guests climbing in Nepal deny climbers have COVID at Everest Base Camp.

Austrian operator, Lukas Furtenbach, told his entire team that he was canceling their expedition due to an “out of control situation at Everest Base Camp.” Furtenbach was one of the few operators who imposed stringent controls over his base camp to minimize the impact of COVID-19. He brought thousands of test kits, hired a team doctor, and limited any exposure with anyone outside his team, including his Sherpas, cooks, and other base camp staff. Yet, he still felt the risks were too high for his 20 customers, 4 mountain guides, and 27 Sherpas. His entire team had completed their acclimatization and were waiting for the winds to recede for their summit attempt.

Lukas sent me an email with his announcement:

We cancel our Everest expedition

(Everest BC, May 15, 2021) Furtenbach Adventures is the first expedition operator to cancel its current expedition on Mount Everest. The number of people infected with Covid in the base camp is increasing, for safety reasons the expedition is therefore ended immediately and the return journey started.

“I didn’t make the decision easy for myself. But to climb above base camp with these massively increasing corona numbers and risk the lives of our 20 customers, 4 mountain guides and 27 Sherpas carelessly, would be irresponsible,” said Lukas Furtenbach, Managing Director of Furtenbach Adventures .

In the past few days, the number of people infected with corona in Everest base camp has increased massively. “With some teams, elementary precautionary measures were simply not observed. There were meetings between the teams, there were celebrations, parties were held. That is why the sudden increase in corona infected people. Our team remained isolated the entire time, our doctor did Regular tests are carried out. But now the point has been reached where we pull the plug, “says Furtenbach, who is also very surprised that nothing is being done by the official Nepalese side.

The high camps on the mountain have been set up in the last few days, and the participants in Furtenbach Expeditions are well acclimatized. A further ascent is still too dangerous because there is of course much less space in the high camps so that the risk of infection increases automatically. “Anyone who becomes infected with Covid at high altitude, then develops symptoms and becomes ill, is very difficult to help. We do not take this risk, which is why our expedition is stopped immediately,” said Furtenbach. Now the base camp is being dismantled, after which the return journey from Nepal is due.

This is not the first time an operator has canceled their expedition for safety reasons. In 2012 Russell Brice of Himalayan Experience (Himex) stopped his efforts due to the impending dangers of an avalanche off the West Shoulder of Everest onto the Khumbu Icefall. He was quite prescient with his decision as two years later that precise scenario occurred taking 14 Sherpa’s lives.

It remains to be seen if other teams will follow Furtenbach’s lead. Most are preparing to leave for their summit bid this weekend. With their departure, I estimate around 300 climbers, including Sherpas, to go for the summit between May 19 and 23. Madison Mountaineering is already at C2 on their summit push.

Expedition Leader Jonathan Schrock checked in from EBC to let us know that we are prepped and ready to begin the summit rotations. The IMG climbers have packed their food, done their final practice with the oxygen masks, and had their final meetings about the plans. The weather reports are improving in a few days, and the team is now looking forward to getting up the mountain and putting themselves in position for the summit bids.

Russian operator Alex Abramov of 7 Summits Club made this declaration:

Dear friends. We’re leaving for Everest at night. To climb.

As I promised, this time I will try to do my 11 climbing Everest without oxygen. I don’t promise it will work out. But I will try. If it comes out, I’ll be the most age-free ascendant on Everest. Now the record is 55 years old. I’m 57. But I’m not going to make a record for the sake of the record. I’m going for myself. I want to spread the framework of my perception of the world. I’m not going to die My experience of 22 expeditions at 8 m will be enough to understand the moment when painlessly you can abandon this complex and dangerous idea.