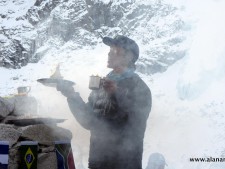 Tragic news for the recent summit pushes. Two climbers using Seven Summits Treks have died both during their descent  according to SST co-founder Chhang Dawa Sherpa :

* Abdul Waraich (Switzerland), passed away near to the South Summit, who was suffered from Exhaustion. Mr. Abdul successfully reached the summit but began experiencing issues during his descent. We sent two additional Sherpas with oxygen and foods, unfortunately Sherpas couldn’t save him.

* Puwei Liu (USA) took his last breath at Camp IV (7900m -S col), While descending from Hillary Step(the max height he gained) he had Snow Blindness and exhaustion, consequently it consumed more hour but with the help of extra oxygen supply and additional Sherpa support he safely reached the South Col, late Wednesday evening before he suddenly passed away.

Updated. Abdul Waheed Waraich had not climbed an 8000-meter peak but had climbed six of the seven summits, leaving only Everest which he sumitted before dying on the descent near the South Summit. Puwei Liu’s was on China’s  Mustagata at 24,757-feet in 2016 and summited Manalsu at 26.759-feet with Summit Climb in 2017 with supplemental oxygen.
Both bodies remain on the mountain. Seven Summits Treks intends to retrieve both bodies as conditions allow. It usually takes almost five to ten strong Sherpas to bring a body down from those altitudes. The weather was reported as excellent on May 11 and 12. More details as available. My sincere condolences to their families.
There were no summits on Thursday, May 13. Teams didn’t climb due to high winds starting Wednesday night, May 12
Alan
Memories are Everything