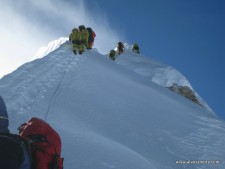 As we get near the end of the Manaslu season, there are more summits piling up, well over 150 now, and sadly one death, but controversy abounds over who really summited. The weather took a turn for the worse holding some teams at C3 or C4 but they are pushing back up now. Also the push is on at Dhaulagiri and soon on Kangchenjunga.

The Manaslu season has been marked by real confusion over what constitutes the true summit and who historically and currently reached it. As usual Mingma G is at the sharp end of the stick as he was with his claim he summited Nanga Parbat and Broad Peak in 2017. He went back later to summit to both peaks to clear any confusion, a sign of true integrity.

Manaslu’s (and Annapurna, Dhaulagiri, and other’s) summit definition and controversy is not new, it’s been fueled by purists for the past several years. For Manaslu, the issue is the last few meters to the summit is across a heavily corniced snow ridge that is virtually impossible to place protections (ice screws, pitons, etc) to protect climbers from crossing it.

So this year, Mingma, building on his winter K2 success, wanted to make a point. This time he proved he made his true summit with the help of drone pictures and videos he shot. Instead of crossing the corniced ridge, he is shown taking a drop-down route across a 70-degree face then climbing to what apparently is the true summit. It appears genuine. Then all the other climbers who claimed a summit this season without following his path will be noted as reaching the fore-summit.

While impressive, his summit has called into question years of previous summits with little evidence to claim they didn’t reach the true summit. Each year, the snow conditions are different so to make a blanket claim that this is the first one since, fill in the year of your choice, feels like a bit of a stretch to me.

The climbing community can be quite judgmental at times, for example calling the use of supplemental oxygen, “doping.” Or having Sherpa support on a climb, “not real climbing.” Some are now calling everyone who didn’t follow Mingma’s lead, “cheaters.” For decades, the well-respected Elizabeth Hawley of the Himalayan Database used common sense to “award” a summit if the route conditions very close to the summit were deemed too dangerous to traverse. She understood that standing ten feet higher was not worth risking your life.

There are no prizes for summiting unless your sponsorship is based on it or you are trying to set some kind of record like summiting all 14 8000ers in the fastest time, and that has lead to fraudulent claims in the past. Christian Stangl‘s K2 fraud comes to mind.

I fully support transparency at every level and that often comes down to personal integrity. If you reached a point commonly considered as far as you can go within reasonable risk, then that’s “your” summit. Of course, that point has to be extremely close to the “true” summit, extremely close. If you want to take the chance, and conditions are right to take more risk, then go for it. It’s a personal decision, but please don’t ostracize others for not being in the right spot at the right time. And those who get to their “summit”, please don’t claim you stood on the tippy top, own what you did with pride.

This New York Times article is full of quotes from famous people discussing this controversy. For example, Ed Viesturs is quoted, “I don’t know. I mean, who’s counting? Who’s watching? Who’s paying attention?” And Messner with “If they say maybe on Annapurna I got five meters below the summit, somewhere on this long ridge, I feel totally OK. I will not even defend myself. If somebody would come and say, this is all bullshit what you did? Think what you want.” The article is well worth a read, especially before making a comment 🙂

Before people ask me in the comments about my 2013 Manaslu “summit,” I was told by Everest record holder, Phurba Tashi Sherpa, Russell Brice’s long time Sidar who fixed the ropes that year, that we reached the true summit and the high spots behind were accumulated snow, not rock. That has always been good enough for me. However in looking at my photos, it appears we stopped at the last bump before “Mimgma’s summit.” And you know what? I’m fine with that. 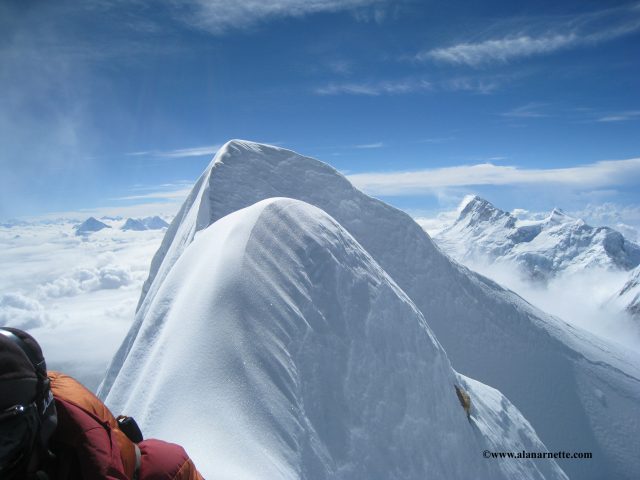 8K Expeditions had a golden season with 21 climbers on top:

Seven Summits Treks, the largest operator on Manaslu reported more 30 summits on top of their previous 24:

Tendi Sherpa leading the Climbing the Seven Summits team status is unknown, they are quiet with the death of a member. Kobler & Partner and Makalu Extreme claimed summits but no details. Furtenbach Adventure‘s team is on the move and should top out the morning of September 30.

The fallen is Canadian Brent Seal, 37, climbing with TAG Nepal/Climbing the Seven Summits. source Cause of death was reported as a stroke or heart attack. My sincere condolences to his family, friends and teammates.

The fixed ropes are to 7500-meters on this 8167-meter/26,795-foot peak. There are four teams with 40 foreign permitted climbers including 83-year-old Carlos Soria Fontán which is his 12th attempt. He was last reported on his push at Camp 1. If the weather holds, they will go for the summit the night of September 29/30.

Several Manaslu climbers are on the Dhaulagiri including Jon Gupta with his client Becks Ferry. They are trying to summit seven 8000ers this season. They have Everest, Lhotse, K2, Manaslu thus far and now are on Dhaulagiri. Also directly off Manaslu is Pakistani is Shehroze Kashif who is aiming for all 14 of the 8000ers. He now has four. He is the youngest climber to summit K2 on 27 July 2021 and the youngest Pakistani to summit Everest on 11 May 2021.

Over on Kangchenjunga, the Alpenglow team said they are ready for the summit push. They gave details on their team:

Topo gave this update on their plans:

So grateful and excited for all that we got done last week! We fixed ropes up to C4, moved oxygen to the higher camps and progressed in the acclimatizing process. We still have until the end of October here but thanks to the hard work and good fortune we’ve had with the weather and conditions in the past rotations, now we’re thinking that the time for a summit attempt is the right move! 🔥In the difficult game of climbing big mountains one has to be ready to wait weeks sometimes for the right moment but also in order to keep the doors open is important to take and try to make the best out of any opportunity that might come one’s way. 🎯Let’s see if the weather and conditions align and we can get on top the next time that the skies are blue! For now, a few days of popcorn and movies with some of my favourite human beings is not a bad plan!