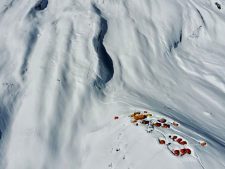 As we enter 2022, climbing activity around the world hits its stride. However, poor weather has delayed several expeditions so patience is a virtue. Looking forward a few months to Spring Everest 2002, uncertainty is growing as more companies cancel their plans. Also, can you sue your guide if you don’t summit?

German climber Jost Kobusch is making progress for his no O solo attempt on Everest’s West Ridge. Please see this video interview I did with him a few months ago, where we discussed his plans in detail. He says his goal is to reach 8,000-meters and not the summit. You can follow him on Instagram, Facebook, and an excellent 3D view of his current location on his website.

Using data from his tracker, it appears he reached about 6000 meters on the Lho La pass and then gained an additional 300m before returning to Camp 1. He made this post on January 2, 2022, “My tent at camp one I hit the foot of the wall this time. This is just more efficient!” Note that Josh made a similar attempt in 2019/2020 and almost touched 8,000-meters before abandoning the effort. 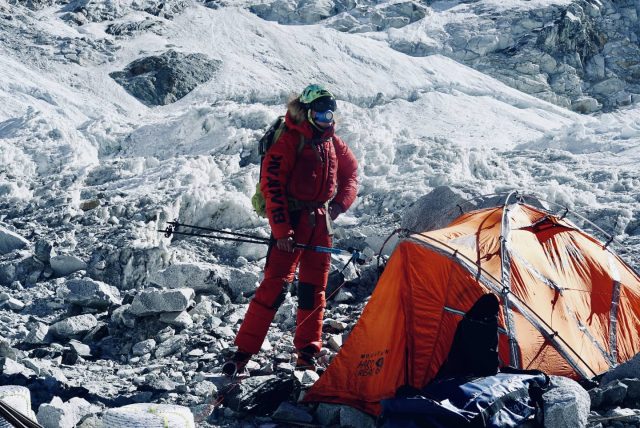 The rock wall leading to the Pass is around 30-meters/100-feet is considered technical climbing requiring a novel self-belay approach that Jost discusses in our interview.

Everest has seen only 13 winter summits for 371 attempts out of the total 10,656 summits. The last winter summit, defined by Nepal and the Himalayan Database as December through February was in 1993 by a very strong Japanese team led by Hikaru Hoshino on the SW Face (Bonnington Route). Polish climbers Leszek Cichy and Krzysztof Wielicki were the first on February 17th 1980 via the South Col route with oxygen.

As I’ve mentioned before, these three articles I recently wrote might be useful for anyone looking to climb Everest this year, or perhaps, ever!

Also, a plug for my Summit Coach consultation service where we help climbers achieve their plans with objective experienced advice on peaks around the world from Mont Blanc, Aconcagua, Everest, and even K2. Please check us out.

We are already seeing some operators like Mountain Trip completely cancel their spring plans on the Nepal side citing, “We don’t feel that we can properly mitigate risk to the best of our ability during peak season on the south side of the mountain, for a variety of reasons.”

Now Alpenglow canceled their Tibet side plans for the third straight year. They said, “This season was no different, as we’ve been moving forward with optimism that Tibet would open for the 2022 spring season. Unfortunately, it is looking unlikely that this will happen.” Alpenglow did announce a Makalua expedition instead of Everest.

As an example of the uncertainties when climbing in China, Alpenglow posted in June 2021 “Alpenglow has confidence that Tibet will open for our Everest North Side 2022 expedition next April. We’re having good communications with our local partners in Tibet and they’re hopeful that they will begin normal tourism by the end of 2021, which should set us up well for Everest expeditions in the spring of 2022, a few months after Tibet has re-opened. They’ve been working with us to consider different potential requirements like vaccinations and COVID testing. Tibet and CTMA (Chinese Tibetan Mountaineering Association) have solid plans in place for reopening the country safely.”

Kobler and Partner have reportedly also canceled any plans for a 2022 climb from the Tibet side.

Oswald Rodrigo Pereira sums up the conditions on Manaslu with:

Never seen anything like this. Last 36 hours were an apocalypse of snowfall.

Heavy snowfall has erased the previous boot path set by climbers on the world’s eighth highest peak, Manaslu at 26,781-feet/8162-meters. The Polish/Portuguese climber, Oswald Rodrigo Pereira is with Belgium climbers Stef Maginelle and Sofie Lenaerts. You can follow progress on this site. Also on Manaslu are Alex Txikon, Sendoa Elejalde, and Eneko Garamendia. Simone Moro is there with Iñaki Alvarez.

The last report had the highpoint at 5,750-meters for their Camp 1. 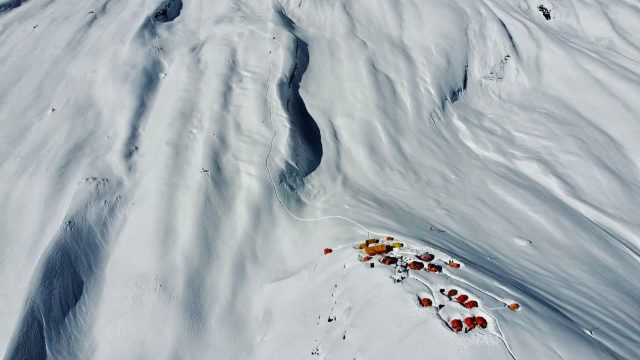 The first rotation was quite short. After two days of opening the route towards C1, on December 25th I climbed loaded (I was carrying my personal equipment and a rope of about 5-6kg). I reached camp 1 (5750m) after 4.5 hours and spent the night there. On the morning of the 26th I woke up with snow and wind; therefore, the only option was to get off. We dismantled the tents together with the sherpa team that came down from C2 (a great job by these superhumans) and went down to base camp ”.

Gelje Sherpa has confirmed he will try to create a standard route on the Nepal side of Cho Oyu starting on January 20, 2022. Currently, it’s rarely climbed from that side due to avalanches and other objective dangers. Of the 3,923 summits on Cho, only 135 have been from the Nepal side.

Myself and my team will be climbing Cho Oyu this month, it is now becoming real and we are more ready than ever. This is not just a challenge for us it’s a message for everyone to follow your passions but also work hard and you will succeed. Bring on this new chapter! Happy New Year to all my supporters and thank you so much for following my journey.

German climber David Göttler posted on Facebook that, “Our chances of success are very, very slim” They are experiencing difficult snow and weather condition.


His team includes Italian Hervé Barmasse, American Mike Arnold, and the Pakistani Qudrat Ali . Thye reached 5600-meters on their first rotation. They want to complete the first winter climb of Nanga Parbat by the Rupal route. It’s a 4,500-meters tall wall that terminates at the 8,126-meter summit.

No updates on a winter K2 attempt by Taiwanese climber Tseng “Grace” Ko-Erh. She is to be supported by over five Sherpas through Dolma Expeditions. It appears to have been a hope with no plan.

No Summit? No Refund. Period

A widely watched lawsuit between a client and Madison Mountaineering claimed Madison made fraudulent statements and he broke his contract when Madison stopped a Fall 2019 climb on Everest from the Nepal side.  In the court order, “Madison Mountaineering and Mr. Madison are the “prevailing parties and “successful parties” in this declaratory-judgment action…”  source and source

While lawsuits like this are rare, they do occur according to industry insiders. However, it is extremely rare for an operator to pay any damages since their contracts are usually perfectly clear that the guide has sole authority to end the expedition for any reason, especially safety.

Excellent reporter Laszo Pinter wrote about the most notable climbs of 2020 as determined by the Piolet d’Or award in this article. The  climbs included:

One Response to “Climbing Updates Early 2022”