After a much better night, I dressed in my down pants and jacket – it was 14 degrees inside my tent at 6:45 AM.
The Lama was prompt as everyone skulked over to the rock alter. Thin pads did little to mask the rocks and cold of the morning as we took our place in rows behind the Lama and two Sherpas. Our climbing tools leaned against the alter. 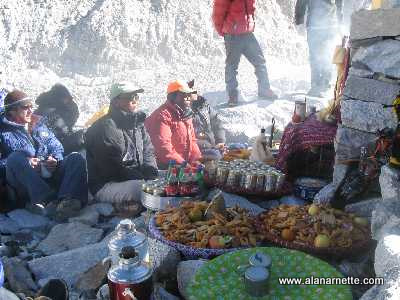 The Lama began his slow chant. His partners provided backup. Soon a rhythm developed as the sun rose over one of Everest’s neighbors. The bright warmth felt good.
The Lama smiled as another Sherpa filled his tin cup with steaming milk tea. He never missed a beat.
Everyone sat quietly, lost in their own thoughts or still half asleep. The Sherpas sorted the prayer flags and chatted energetically amongst themselves.
The Lama chanted – even he looked cold.
With a flury, the flag pole was raised from the top of the rock alter. Prayer flags strung across our camp.
Not sure of the meaning, a light bulb was lit on the top of the pole. Power came from the generator. I think this was Sherpa one-upmanship. 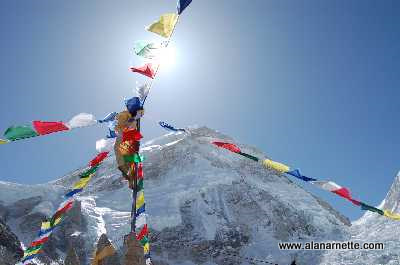