OK, try left side is . No, on my back. Right side – yes, that is it. Ugg, the crocodile roll begins.
The last night in a tea house was supposed to be comfortable – a quasi mattress, walls, a roof. But three hours of sleep was the I could muster.

Dawn came none too early. The walk to BC would only take two hours. I settled into a comfortable pace – music keeping me company – and mastered the technique of avoiding rocks and enjoying the view.
Ding, ding, ding.
The yak bells rang.
The summit of Everest played hide and with lesser mountains but still brought a thin smile to my face each time. The winds were strong up there yesterday and a plume was visible. 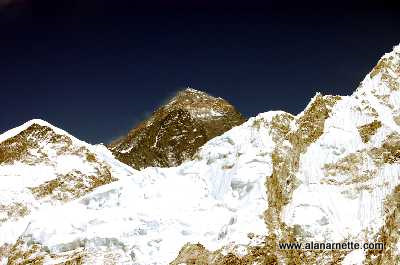 “What is that smell?” I asked myself as I passed a young Porter. He was carrying kerosene. Soon a table passed me followed by a full set of chairs.
As I turned a corner, I was met with two eyes, two horns and a forehead as large as a small car. We made eye contact. Right? Left? He seemed to want me to make the first move. His friends waited ly behind. I moved left – uphill – and they slowly filed passed.
Ding, ding, ding.
Up and down, the narrow well trod dirt trail followed the contour of the land. The air became much colder as it neared the Khumbu Glacier. What stories the ice could tell. But all it says is “crack” as it moves down valley. 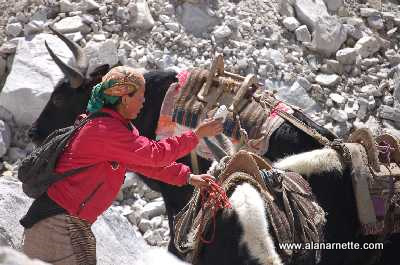 A yak train leaving Base Camp meets another going to Base Camp. The Sherpani women take charge. “Whaaa” one shouts out. She pokes the slow one with a stick. Another gets a small rock thrown at him. They just look at her.
Ding, ding, ding.
Women run the Khumbu. Yaks run the trails.
There it is – Base Camp. Laphka Norbu and Lama Babu, two of our Sherpas meet us with hot tea at camp’s edge. I like climbing in the Himalayas.
Entering BC brings back a flood of memories. Sherpas are busy building a helicopter pad away from the main camp. There have been two crashes in the last few years.
Tents of all sizes line the “main street”. Some Sherpas have been here for weeks building tent platforms, rock walls for cooking tents and alters for Pujas. It is a not so small city at 17,500′. 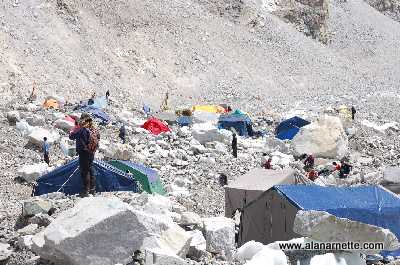 There is electricity in the air. I pass by a pile of ladders that will be used in the Icefall. It will be ready by Friday. We will go up Saturday.
Sherpas pass by and chat with one another like race horses at the starting gate.
The meandering rocky trail takes us to the furthermost point of the camp. This is good: close to the base of the Icefall and close to clean water. But it is still boiled before using.
We enter camp greeted by the cooks, cook boys and other Sherpas. They are ready to go.
My tent is perched on a small ridge with a clear view of the Icefall and the rest of BC. I am surrounded by other yellow tents. Dining, cooking, storage, communications, shower, toilet – tents are everywhere.
I stand by my tent. I drop my pack. My two duffels by my feet. I look at the Icefall. I can feel the route. I close my eyes. Sounds fill my head.
Welcome to Base Camp.
Remember: Memories are Everything
Climb On!
Alan
P.S. Pictures have been added to the dispatch A Father’s Memory

3 Responses to “Welcome To Base Camp”