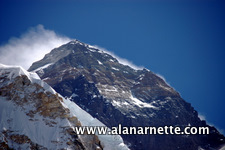 There were 513 total summits on both sides of Everest in the spring 2010 season. This according to Asian Trekking’s Ang Tshering Sherpas regular news letter. He said there were 157 foreigners who summited along with 190 Sherpas on the south and an estimated 165 on the north side.

He further quotes the Grand Dame of all Everest statics, Ms. Elizabeth Hawley that 5070 people have now summited Everest since 1953 and about 3431 of those are single summits with the rest being multiple summits. There were 268 new summits in 2010.

He also confirms the previously reported new age restrictions on the north side of 18 minimum and 60 maximum but that they can be waived upon proof of adequate health, whatever that means. This apparently applies to all of Tibet’s 8000m peaks including Everest, Cho Oyu and Shishapangma. There is also a minimum team size and ratios for Sherpas to climbers. These have been in effect but not enforced very tightly.

You can download the entire letter from Ang Tshering Sherpa, chairman of Asian Trekking.

A bit more information on the death of climber Peter Kinloch from Frank Irnich, a 48-year-old physiotherapist from Munich, Germany, who was also a member with SummitClimb and was climbing and sharing the tent with Kinloch. It is an interview in the German newspaper Merkur-online.de. It is in German so use a web translation service such as Google translator to read in your language. There continues to be no further information on this incident on the SummitClimb website.

Jamie McGuiness, on the north this season made these interesting comments about oxygen in his season wrap-up:

What surprised me was on the mountain though. In the past most leaders and climbers thought five bottles of (4 litre) Poisk oxygen bottles was enough and a good, safe balance, and understood that logistically five bottles are possible to put in place; more is difficult unless extra sherpas are employed. However increasingly the attitude of getting to the summit no matter what style is prevailing and so we need to offer realistic options for high flow oxygen. People (for not all are climbers) are joining with less and less experience and don’t care about the details, either we have to cater for them slightly more or turn them down.

The Fall Everest season is traditionally very slow with only a few teams making the attempt and usually from the south. Teams must manage the Icefall ladders themselves so the logistics are quite different from the crowded spring season. Weather is often difficult with a bit shorter summit windows. However it can be incredibly clear and crisp as the area transitions from summer to winter.

This fall, I already know of one serious expedition attempt. It is by Polar explorer, Eric Larson. He is trying to go to both poles and summit Everest within one year in the cause of global warming. He has already successfully skied, expedition style, to both poles.