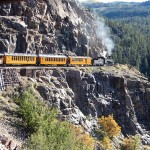 Sometimes a goal is not a goal until you near the end. That is my story for climbing all of Colorado’s Mountains over 14, 000 feet.

My first 14er was Longs Peak in 1992, then a few more in 2002. I got serious after meeting Patrick Vall and Robert LeClair. They both wanted to climb all the 14ers and I needed the training for my Himalayan climbs throughout the decade. Thus one by one, we started climbing them all.

This weekend I will travel to an area named the Chicago Basin and climb three of the ranked 14ers thus competing my climbs of all 54 in Colorado.

OK, actually my final climb will be number 59 since there are some 14ers that are called 14ers but are not included on THE list because they are not 300′ higher than the saddle connecting to another 14er! Oy!!

The trip starts with a 30 mile ride on a steam train from Durango that takes two and half hours. The train pauses at a bridge in the middle of nowhere and drops climbers off with their gear. From there we backpack about 6 miles to Chicago Basin where we will establish camp for the next couple of days.

In addition to Patrick and Robert, a new friend John Little will join us. John is new to climbing. We made his first 14er summit last year on Mt. Belford. John has trained hard for this next challenge and it will be fun climbing with him.

For me this climb is special in a number of ways. First, this is the kind of adventure I dreamed of growing up in the hot, humid and flat land of Memphis. As a Boy Scout, I loved camping but it was limited to the thick forests of Tennessee and Mississippi. Reading Outdoor Life, Field and Stream and Boys’ Life magazines, I saw pictures and read in detail the stories of backpacking into the wild and remote areas of the Colorado Rockies.

I had my external frame pack, heavy leather boots and cotton sleeping bag. I did own a puffy down jacket but it was not that useful in the South! I could only dream of what it was like in the rarefied air at 14K.

But there is more to this climb than just a climb. On August 16th it will be one year since Alzheimer’s took my mom, Ida. I will celebrate her life with my final 14er summit on Sunlight Peak.