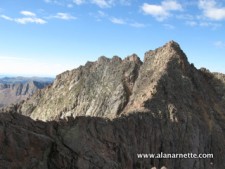 I was fortunate to have my regular partners, Patrick and Robert along and some new friends, Anne and Kevin plus John Little from Houston, Texas. There are new trip reports for all the climbs on my main site.

The plan was to take the Durango & Silverton Narrow Gauge railroad to a wilderness drop-off point and backpack 6 miles into the Chicago Basin We would climb the Eolus Peaks on Sunday followed by Windom and Sunlight on Monday. Relaxing on Tuesday morning, we would then hike out to catch the train back to Durango. Well that was the plan.

We successfully got Eolus per plan and I am especially proud of and for John who made it in style with this being only his second 14er after the class 2 Mt. Belford with me last year. We had excellent weather and thoroughly enjoyed the day as a group. The only hitch was when Patrick dislodged a large rock scraping him up and almost sending him down the mountain face. It was a close call.

The next day, Monday, opened with low clouds, constant drizzle and occasional sleet. However, a subset set of the group went on to summit Windom Peak in almost zero visibility conditions. So for me, that left Sunlight as my last 14er out of the total 54.

I wanted to summit on August 16, the one year anniversary of the passing of my mom, Ida, as a tribute to her and to finish my 14ers. Plus to launch my 7 Summits quest where I will be raising awareness and $1M in research money. However, the mountains had a slightly different plan.

After Windom, Robert and I started up Sunlight but the conditions worsened. I continued solo to the summit ridge when the clouds thickened causing me to choose re over pushing a bad position. 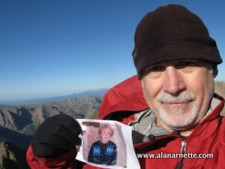 However, not to be stopped, I left camp at 4:00 AM on Tuesday to complete my 14ers. Alone on the summit, I took this picture.

It will be a moment forever etched in my memory.

I caught the train per schedule and enjoyed a celebration with John since everyone else had to leave to get back home.

The satisfaction I feel is one of pushing through to the end to complete a goal. As I look back on my climbs, I can trace phases in my life – new friends, serious changes, great experiences, meaningful losses. The constant being the attraction to climb the mountain, to feel the summit, to accomplish the goal. Made all the better with friends.

With the 14ers now completed, I will continue to climb them; it is part of who I am. Next week Robert and I will go to the Maroon Bells where Robert will break into the 50’s of his 14er quest. I plan to summit my local, Longs Peak another 5 times this year bringing that total to 25 as part of my ongoing training.

And of course, to start climbing the 7 Summits in November with Antarctica’s Mt. Vinson and ending with Cartsensz Pyramid in late 2011. Yes, this includes Everest in April and May of 2011.

My goal is to raise awareness and research money to find a cure for Alzheimer’s. I have lined up an impressive team of committed industry partners and it will be a major event for the almost one year. There will be opportunities to participate through joining a climb, making a donation or just following along.

To plant a seed, consider making pledge for one or all the climbs based on how high I get on each climb. Your donation would go to Alzheimer’s non-profits and nothing to me or to fund the climbs. Here is how it would work:  If you commit one penny for Denali as an example, you would donate $131 to Alzheimer’s research. It would only be $807 for all 8 climbs over 12 months, probably less than you spend on coffee at $2 a day.

This is the schedule for a penny per foot climbed:

Much more will be announced but if you have questions now, please contact me.