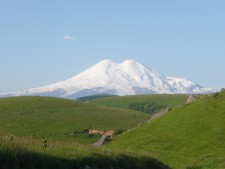 Mt. Elbrus from the north

I am off to climb the highest peak in Europe. A quiz to see if you can name which mountain most often noted as Europe’s highest but are mistaken according to cartographers and politicians.

Mont Blanc at 15, store 782 feet is the highest peak in Western Europe thus leaving Elbrus, check 18, 510 feet/5,642m in Southern Russia nestled between the Black and Caspian Seas the highest is all of Europe.

So why the controversy? Well Russia is actually in both Europe and Asia. Western Russia, including St. Petersburg and Moscow, are claimed by Europe while the sparsely populated areas to the east are noted in Asia. 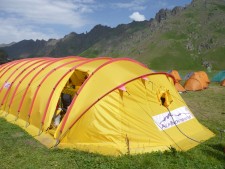 It can be climbed from both the north and south faces with the south being by far the most popular given you can take a chair lift to 12,800 feet and a snow cat even higher before you even begin climbing!! I will not be taking this route.

I am climbing the longer north side to see that part of rural Russia and experience more of a climb. A last minute change of plans has me climbing with AlpIndustria Adventure team out of Moscow.

The summit attempt should be around August 11th or 12th with a long ascent day of 5,975′. Of course as always, the weather has the final say on these mountains and Elbrus is famous for harsh, cold weather.

Back to the geography discussion, exactly what is Europe and Asia?; Well it is mostly an arbitrary distinction. The Ural Mountain serve as the border. Apparently in the founding days of Russia, Peter the Great leaned more towards Europe than Asia thus building the alliance. Today, Russia is clearly unique being neither European nor Asian except when it comes to mountains! Of course at one time Russia also claimed land in North America but that was sold 🙂 Oh, and I have summited Mont Blanc three times so I have it covered either way!

I will be posting updates as usual as well as using the SPOT GPS tracker so please follow along. This climb is worth $111 for a penny a foot I climb from base camp to the summit. I hope you will donate to one of our benefactors.

12 Responses to “Highest in Europe: Here I Come!”