I was surprised to receive this personal letter today from my US Senator, try Mark Udall. I didn’t know a lot about his climbing experience but the personal nature of this note led me to find a kindred spirit with my Senator.

While my attention was immediately directed to his climbing comment, it was his acknowledgement of the Alzheimer’s work that brought a smile. Senator Udall supported the National Alzheimer’s Project Act recently signed into law by President Obama.

He worked for Colorado Outward Bound School as a course director and educator from 1975-85 and as the organization’s executive director from 1985-95. He summited the 28,169′ Kanchenjunga in 1990 and attempted Everest three times without a summit, including reaching 25,500 on the North Face. Also he was stuck near the summit of Denali for 10 days waiting out a fierce storm

If the Udall name sounds familiar, politics runs in his family. His father, Morris “Mo” Udall, served in the U.S. House of Representatives for 30 years and ran for the Democratic nomination for President in 1976. His uncle, Stewart, was Secretary of the Interior under U.S. Presidents Kennedy and Johnson. In 2008, Mark’s cousin, Tom Udall, was elected as New Mexico’s Senator.

Udall serves as the chairman of the United States Senate Energy and Natural Resources Subcommittee on National Parks.

Thank you Senator! and Climb on! 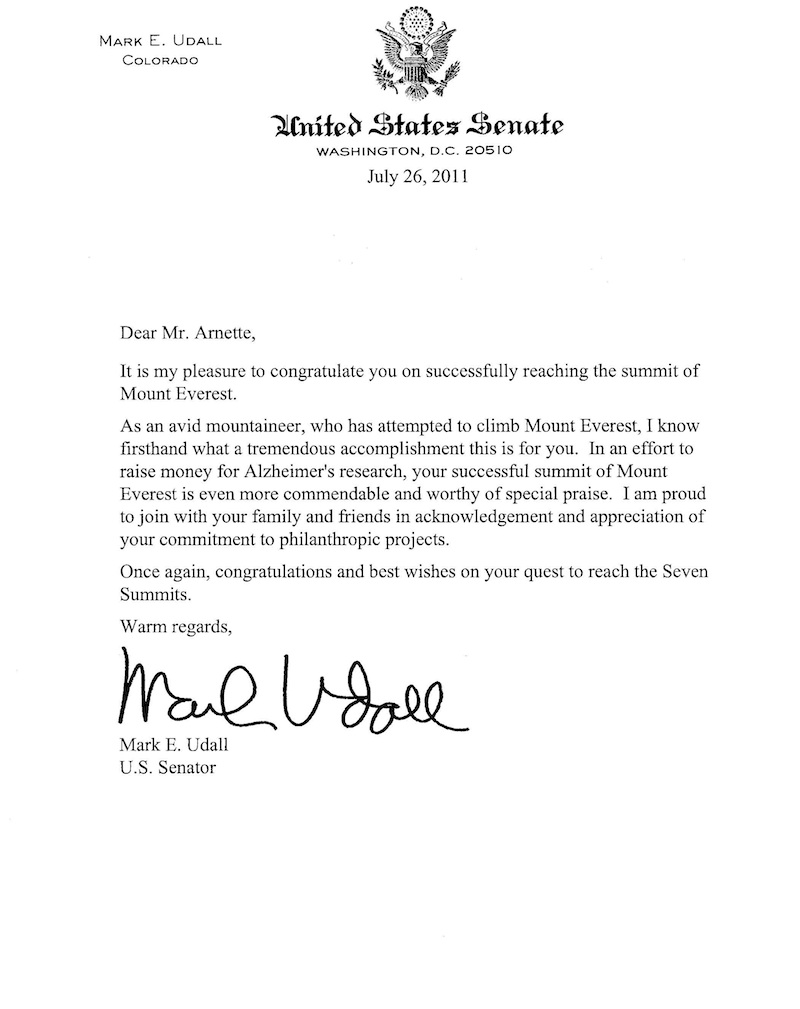 To get to know my Senator better, watch this crazy interview with comedian Stephen Colbert. He starts to discuss Everest at 3:16 at in the video.

14 Responses to “Everest 2011: A letter from my Congressman and more”