The thin white nylon rope snaked straight up, the footpath went directly
ahead rounding an icy corner before gaining elevation. I looked around
for guidance on the route to Camp 2 on Manaslu but found myself alone;
no teammates, Sherpas, guides from other teams – no one around. I was
alone and needed to continue climbing this 8th highest peak on Earth.

Manaslu is a different mountain in 2013. The low snowfall has left the
previous route fraught with crevasses. The fixed line from last year is
drawn tight a hundred feet in the air with aluminum pickets swinging in
the wind. Movement of the glacier and snow had changed what was known.
The Sherpas had to work very hard to find a new route through a
labyrinth of house sized ice blocks, frozen icy walls and steep snow
slopes between Camps 1 and 2. This section is known as the technical
crux of the normal route and it was living up to its reputation. Even
long time Sherpas shook their head in amazement at the difference in the
route this year.

As I looked at my options, I choose to follow the rope. The footpath
ended on a thin sheet of ice creating a deadly snow bridge over a
bottomless crevasse. The gully was a better option. The climb was steep,
perhaps 60 degrees which in climbing terms is steep. The snow was
already mushy at 10AM this morning.

We were one of the first teams to do an acclimatization rotation to Camp
2 so there were no steps kicked into the narrow gully. I took my jumar
off my harness and attached it to the rope as I simultaneously kicked
the front points of my crampons into whatever I could gain on
this narrow, one hundred foot tall snow gully. I kept my 70cm, long
handled ice axe out using it as another grip. I wished for my two short
handled axes I used back in Colorado for ice climbing.

Step by step I gained elevation, my breathing increasing as I was
quickly passing 20,000 foot in attitude. My pack was loaded with my down
suit, sleeping bag, pads, food and water. It was a load that emphasized
that I had taken the right approach to training the previous six months
by climbing my 14ers with 30 to 40 pound packs. As I crested the top of
the gully, I paused and looked behind. I wondered how it would feel in a
week or so when we returned for the summit climb.

The route continued in a teasing series of steep up-climbs followed by a
brief plateau. The route switchbacked painfully, showing no mercy. More
shorter gullies required a repeat of the initial “bottleneck” section in
this area often called the Hourglass. In what had taken three hours in
previous years was taking climbers five, six even eight hours in 2013.

I settled into my 8000 meter pace trying to find a steady rhythm, a pace
that made progress but did not tax my cardio beyond its capacity. My
mind went into a place between subtle awareness and a subconscious
autopilot. The clouds formed quickly then dissipated bringing out a
harsh sun that told me to take off my shell jacket. But just as quickly
they returned along with a slight breeze that made me glad I had it on.

I followed the rope, clipping in with my carabiner as I hopped over
countless crevasses of varying widths. I was climbing this mountain, not
hiking. It felt good. It felt real.

Climbers from various teams spotted the white mountainside ahead and
behind me now. I lost track of my five teammates. As I took a break to
finish off my one liter of water, I looked around. The view revealed
high Himalayan mountains in all directions. Snow covered, sharp summits,
long ridges; the variety of mountains offered so many more climbing
challenges than this one popular peak. Many climbers were using Manaslu
as a warmup for Everest. In many ways, this section was more difficult
than anything they would experience on the world’s highest peak.

Once again I crested a slope but this time was greeted by a single
yellow tent, a classic, a Bibler. I went past it to gain yet another
crest but this time saw more tents – a pair of lines with 20 tents in
all. They belonged to Himex. Ours was on a ridge slightly higher
revealing an unobstructed view of Manaslu’s South Pinnacle and the route
to the higher camps – three and four – the route to the summit.

I dropped my pack heavily on the snow. Phil Crampton greeted me. Paul
was already there. It had taken me five hours. I felt good as I sat on
my pack to remove my crampons. Phil congratulated me as Paul had made a
brew to replenish my empty bottle. I returned the favor for my following
teammates a bit later in the afternoon.

Phil then gave an ominous warning. “Do not walk around here in your boot
liners. It is icy at night and if you slip you will fall into that
crevasse.” He said pointing downslope to a huge open crack nestled
between steep snow covered walls. “There is a body in the crevasse from
last years avalanche.” He paused and stared.

The next two nights went slowly as my body reacted to the reduced oxygen
content. I shared a tent with PK. We took turns melting snow to
rehydrate meals, for hot drinks or just simple drinking water. Each pot
took over 30 minutes to melt at this altitude.

Around sunrise and sunset the winds would pick up. The midday heat
inside, and outside, the tent was tortuous. There was no escape, the
only choice was to strip to the bare essentials, sip water and stick a
bare foot or hand outside the tent into the cold snow.

With the sunset, a welcome cold enveloped the tent. Down jackets went
on, and socked covered feet into the warm sleeping backs. Wool knit hats
protected our heads. With an unexpected urgency, the tent walls
collapsed against our bodies. The tent began to take on a life of its
own as it breathed in and out. The wind was stressing the design of tent
at 21,000 feet. Billowing in and out we lay quietly in the tent watching
the movement. The roar of a nearby avalanche subsumed the roar of the
wind. The mountain was alive.

Just as quickly as it started, the wind stopped. The jet stream was
nearby creating microburst, tiny weather events not found elsewhere on
the mountain – random and violent.

PK picked up a where he left off with one of his stories. He served 25
years as a California prison guard and had entertained our team for
weeks now with stories not to be believed. Just then I heard. “Alan,
Alan Alan!” It was Louis in the next tent. “Can we borrow your stove?”
We had just finished our brew for the night and they were having
problems with theirs. He gingerly walked over, sticking a down covered
arm into the vestibule to take our stove. He and Paul in one tent, PK
and I in the next, Phil and Dan one over and Sherpas Tarkey and Dorge in
the last. Our small team was at Camp 2 working feverishly to make red
blood cells required for the summit push.

Now back at Base Camp, we are monitoring the weather forecast.
Precipitation is expected in a few days, so the game begins to push to
beat it or to wait for another window. Time is on our side but with such
good weather this year, everyone is eager to get up and back down as
soon as possible. We know winter is around the corner and once it starts
on these extreme mountains, the climbing season is often over.

We pass the time reading, talking, visiting with other teams, comparing
notes. Base Camp is now filled with climbers from around the world.
Famous ones climbing without Sherpa support or supplemental oxygen but
using the fixed lines, ladders and routes put in by the commercial
team’s Sherpas.

Commercial teams like ours follow well known formulas on Manaslu – climb
high, sleep low. Most climbers contribute a small sum of $100 to pay a
bonus to the Sherpas who fix the lines above Base Camp. Then there are a
few teams who use the resources but do not pay, for some reason they
feel justified in following their own set of rules.

The atmosphere is light. People smile, laugh easily; shaking hands with
a genuine appreciation for our common goal. I have been humbled to be
recognized on the mountain from my website. But most of all, was
acknowledged for my work on Alzheimer’s through climbing by one European
team leaders. We compared notes on our experiences of this disease and
agreed that more needs to be done: research, awareness and for caregivers.

So while Manaslu presents us with a challenging season, life goes on at
home. Families are desperately missed. We drift off to sleep each night
with thoughts of those who mean the most to each of us in life. We are
here on our own journey ing inward goals but recognize the sacrifice
and support of those around us who make this possible. 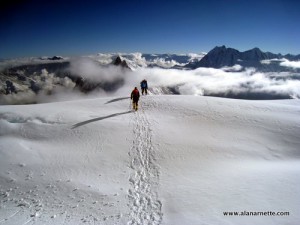