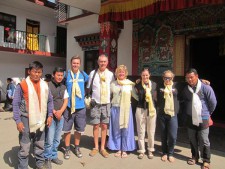 Our climbers are starting their Everest experience in full force. After 18 hour flights, and crossing multiple timezones, they are arriving in Kathmandu, the capital of Nepal.

Once they are settled into their hotels, one of the first orders of business for many climbers, and trekkers, these days is to get a sim card for their cell phone.

How times have changed

Ncell is the preferred carrier because they charge 1.99 Nepalese Rupee  (USD $0.02) per minute for a call to the US! There is coverage throughout Nepal and up to Everest Base Camp. In 2011, I was able to get a weak signal all the way to Camp 2 and some report a connection from the summit itself! 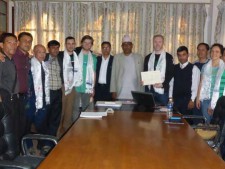 Another task is to get their briefing and climbing permits from the Ministry of Tourism. Normally this is handled by their lead guides but for 2014, the Ministry is requiring that the climbers attend a briefing on how to behave on the mountain. As I have covered in previous posts, this is not a bad thing but I wish that they would focus on removal of human waste and not etiquette.

Eric Simonson of IMG, is doing his usual great job of keeping us updated on conditions. He reports that the Icefall Doctors have the route fixed to the Football Field (about half way) in the Khumbu Icefall and should be at Camp 1 in a few more days. This is good news in many ways as it indicates the Icefall is not showing any unusual problems with stability and that the Doctors are working together well. Climbers will not be arriving at Base Camp for at least another week.

Russell Brice of Himex just posted his first update for the season. He has a lot going on with teams on Everest (17 climbers, 4 guides, 17 Sherpa), Lhotse (3 climbers, 1 guide, 4 Sherpa) and Makalu (7 climbers, 2 guides, 7 Sherpa). In an unusual move he is having his Makalu team join the others to acclimatize on Lobuche Peak then taking a helicopter to Makalu Base camp thus avoiding the 10 day trek. Russ also talks about supporting his two film crews including Tim Medvetz with his organization, The Heroes Project. USMC SSgt Charlie Linville will be climbing Everest. He lost his foot to a below the knee amputation the summer of 2013 after fighting for over a year to save it. 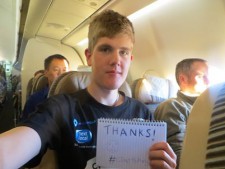 Can’t possibly reply to every good luck message as there’s just so many, but here’s a small message of my own from 35,000ft. Nothing worth fighting for is ever easy but I couldn’t have got here without you all in the past 15 months. Now to find some good coffee in Kathmandu…

I am always inspired by what our climbers write as they leave home or upon their arrival in Kathmandu. Ricardo Pena, climbing with Altitude Junkies made this Facebook post as he left home:

What a moment! About to take off from Denver to LA. I will fly LA to Seoul, Korea and from there to Kathmandu, Nepal! I will arrive there in two days! After many years of dreaming about Everest, after 10 crazy months of fundraising like crazy, training harder than usual, 10 months of guiding many mountains including Rainier, Crestone needle, winter 14ers, one expedition to the Andes and three to Mexico’s high volcanoes, 10 months of trying to keep some sort of balance in my life between all this and being a full time musician, music teacher, father (and I guess that makes me in the words of Stevie wonder a “part time lover” hahaha) I finally put everything behind and focus on the biggest mountaineering challenge of my life: to climb Mt. Everest! And the adventure begins now!!! I am psyched! Very happy!!!

Once in Kathmandu, many teams will stay in small hotels in the Thamel District. Others will stay in western hotels like th Hyatt or Four Seasons. Melissa Arnot posted a great description of her arrival:

Arriving in the hustle and bustle that is Kathmandu always feels oddly comfortable. The cars, people, and animals all follow the same traffic rules, in that there aren’t any.

Many teams have a day or two in the schedule to explore Kathmandu. This is a great opportunity to make the transition from home to, well, whatever you want to call climbing Everest.

The city itself is a contradiction for the senses. It looks chaotic but somehow works. The policeman directing traffic look in control, but it is a mirage. There are 11 hour power blackouts so the hotels have backup generators. Restaurants are full, yet the service is personal. Smiles abound amongst the trash heaps.

It is easy to get frustrated or anxious in this new environment so it is a case study in how to accept what you cannot change and go with it. A lesson for later in the expedition.

Many people will visit the standard tourists spots including a trip to the Bagmati River which is the home of a significant Hindu temple. Ghats or river steps line the river. They can witness cremations. Bodies are painted and positioned on top of logs and set afire. When all that remains are the ashes, they are put in a small bowl with milk and flower petals covering them, and then washed into the river with an elaborate religious ceremony. Certain areas of this temple are reserved for cremating royalty and others for the lower classes. 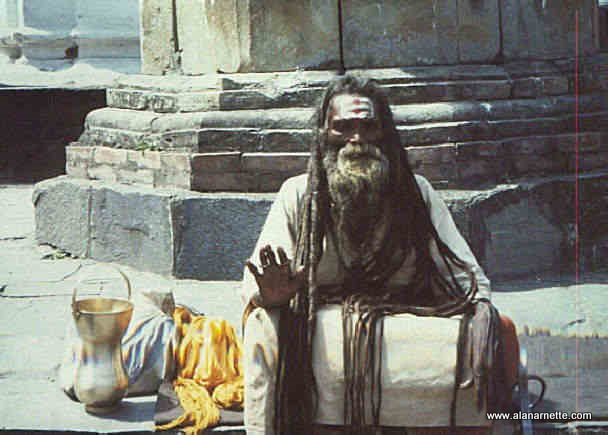 Pashupatinath is the holiest Hindu pilgrimage destination in Nepal. Boudhanath is among the largest stupas in South Asia and it has become the focal point of Tibetan Buddhism in Nepal. Monks walk about in maroon robes as well as Tibetans with prayer wheels in their hands. The climbers will also see the ritual of prostration where worshippers circle the stupa on their hands and knees, bowing down to their lord.

Another favorite spot is the Swayambhunath or Monkey Temple. This temple is located a short distance from Katmandu. There are over 500 wild monkeys crawling around on the steps and buildings – thus the Monkey Temple. Our climbers can get a nice pre-climb workout climbing the 365 well worn-steps leading to the top of the temple.

OK, so far so good but is before early.  Looks for some downtime as climbers are still traveling or getting adjusted in Kathmandu. But many will be posting updates of their arrival. A few are already on the trek so there are a lot of great stories coming in for Everest 2014.

I’m glad you are along this year!