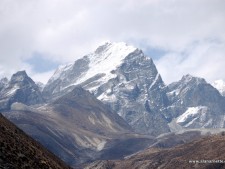 Just as some teams arrive at Everest Base Camp, salve they turn around and leave. What’s up? Well for many years now, some major western teams have used lower peaks in the Khumbu for acclimatization in order to reduce the time spent climbing through the Icefall.

As usual before we go on, let’s review where the teams are today. More climbers arrived at Everest Base Camp (EBC) on the Nepal side just as the teams climbing from Tibet crossed the border on their way to Chinese Base Camp (CBC). The Triple 8 team is on their way to Cho Oyu. I will report on them often as their ultimate objective is to climb Cho Oyu, Everest and ski Lhotse.

The RMI team, lead by Dave Hahn, did the normal practice on a course setup by the Sherpas at EBC. This is a very short series of fixed ropes using anchors that climbs a 50′ ice and snow hill next to EBC. Climbers are able to work out any issues using their jumars and carabiners to move quickly pass the anchors while staying attached to the fixed line. This is important on the Lhotse Face and SE Ridge. Usually the course includes a ladder. It is also an opportunity to make final adjustments to crampon fit on the big, clumsy 8000 boots.

JJ Justman described it this way for the RMI team:

Today we had a really great day. It was our second day of training in the Icefall. We set up a nice obstacle course and got everyone familiar with some of the ups and downs and the crosses of what the Khumbu Icefall is going to entail. Everyone’s doing really well. It’s nice to have some practice on some fairly solid ground before we get to the real thing. Everyone just did a tremendous job. It’s really good to see great teamwork.

A few teams are just arriving in Kathmandu including Arnold Coster and some SummitClimb groups. Adrian Ballinger’s Alpenglow Everest climbers won’t arrive until April 26th reflecting his philosophy of spending as little time as possible on the mountain by acclimatizing at home using altitude tents. They will then take a helicopter almost to EBC also avoiding the trek in the Khumbu.

Lucy Rivers Bulkeley posted a nice series of pictures from her trek. She is climbing on a permit with Henry Todd. IMG is keeping an ongoing series of pictures on their Facebook page and updated it yesterday with a series on their camp at EBC. It gives a nice feeling for what the climbers are experiencing from food to sleeping to the practice course.

Not to be alarmist, but we are already getting reports of people getting sick. This is completely normal as western bodies adjust to the new food and bugs of the Khumbu. The outstanding team of EverestEr are already at EBC prepared to help climbers, Sherpas and porters. All they ask is $100 from the Western climbers and that will also cover all their support staff. EverestEr does an outstanding job every year supporting the climbers and saving lives. They depend on donations to run the operations as the $100 doesn’t come close to covering their costs.

Good to see some of climbers are learning essential Nepali. Alex Staniforth tweeted this today:

My new mantra for the next 7 weeks is “pistare pistare funghi mare” = Nepalese for “slowly slowly catchy monkey!” Taking each day at a time.

One climber, Patrick McKnight has been keeping an amazingly detailed blog on his preparations for Everest. He is climbing with the SummitClimb team from the South. He covers their briefing at the Ministry of Tourism.

The 7 Summits Club team checked in with me for their north side climb. They have 14 members and 4 guides with a large Sherpa support staff. They are the largest team on the North. Their leader, Alex Abramov always does a great job of posting pictures throughout the expedition so visit their site often.

Meanwhile some the IMG  teams are now at EBC and other are already climbing Lobuche as part of their acclimatization program. Himex will soon follow this schedule. It has become common for many teams to use the smaller peaks including Lobuche, Island (Imja Tse), or even Kala Patar as part of their programs. 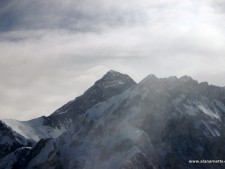 Lobuche is often classified as a Trekking peak due to the lack of technical difficulty and the relatively mild altitude;  it is “only” 20,075ft/6119m . Teams like to use Lobuche for acclimatization because the summit is the same altitude as Camp 1 and it eliminates at least one trip through the dangerous Khumbu Icefall.

In 2011, I knew of at least two teams that used it in some form: International Mountain Guides (IMG) which was my team, and Himalayan Experience (Himex). Peak Freaks used Kala Patar for a similar purpose. In the IMG case, we made the 8 day trek from Lukla to Everest Base Camp proper at 17,500?, spent a few days then backtracked a full day to Lobuche.

IMG and Himex had full Base Camps on opposite sides of Lobuche with IMG located at 15,740?. We stayed for one night before making a short two hour climb to our High Camp at 17,400? We left that camp around 3:00 AM the following morning for our summit bid. 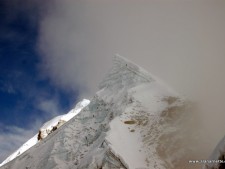 The climb was straightforward following the edge of a rocky slope but staying on snow slopes the majority of the route (click to see the  route.) The route steadily gained altitude and got a bit steep towards the summit. We crested onto a flat area of the summit ridge and stopped at the named Lobuche East aka the fore-summit of Lobuche.  The views of Everest, Lhotse and Nutpse were outstanding from this rare vantage point.

There is another peak to Lobuche, West Summit which is substantially more difficult to reach as it is heavily corniced and requires rappelling down a steep notch then regaining altitude. Given we were acclimatizing, not peak bagging, we were pleased with the East.

Lobuche provides Everest climbers with a good shake down before heading into the Icefall. There are fixed lines, traveling at night, steep angles requiring ice axe, crampons, harness – the same as on Everest.

OK, that’s all for today. Look for a couple of teams to enter the Icefall soon.