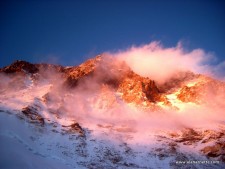 In April of 2014, over 300 climbers saw their dreams of climbing Everest come short when the most deadly incident in the history of Everest brought an early end to the season. 16 mountain workers were killed from the release of an ice serac on the west shoulder of Everest onto the Khumbu Icefall.

The resulting actions taken by some in the Sherpa community resulted in an effective cancellation of the season as they refused to support the member climbers. However, one climber, Jing Wang of China flew a helicopter to camp 2 and went on to summit with a small team of Sherpas.

This tragic accident continues to have deep echoes throughout the Everest community. Operators are still adjusting prices, even with signed contracts in place with members with set prices. They are asking for more money to cover higher insurance polices for the mountain workers. Some operators are still unsure if they will switch to what is now perceived as a more politically stable north side for their spring 2015 expeditions. Others are offering climbs on both sides letting the members choose.

One large question was if and how the Nepal government would follow through on their promise made in June of 2014 to honor climber’s Everest permits for 5 years. We now have an answer. Technically thee permits will be honored but practically they have been refused. Once again, the government is showing an amazing disdain for the very people who bring millions into their economy.

As reported today in the Himalayan:

the government issued a directive last month to extend by five years all group permits that were issued to Mt Everest expeditions during the last spring season. This effectively means that the same members of the expedition will have to scale Mt Everest together within the next five years. If even one member of an expedition scales the mountain, permits of others will be cancelled.

This is an amazing twist on what should have been a simple gesture. It is practically impossible for the exact same people to come together under the same guide service. This is as absurd as the Nepal government saying Everest was “open” when the icefall was not being safely maintained last spring. However, when Jing Wang summited, albeit using helicopter assistance, the government proudly declared Everest was open in spite of initially chastising her for “illegally” using a helicopter. Later they gave her an award as they took her $30,000 “gift” for schools in Kathmandu.

So, the net effect will be that anyone who had bought a permit for $10,000 for a spring 2014 Everest expedition will be forced to a new permit that now costs $11,000 if they want to attempt Everest from Nepal.

On a slightly more pleasant note, a new company has announced WIFI service throughout the Khumbu including at Everest Base Camp.

Everest Link is a fixed-wireless access service to the Internet. We operate our own wireless network. It is versatile, reliable and scalable. Founded in 2014 and headquartered in Kathmandu. We offer our services in Lukla, Phakding, Monju, Sewangma, Namche,Thame, Tengboche, Pangboche, Dingboche, Pheriche, Lobuche, Gorekshep, Phortse, Dole, Macharmo, Gokyo, Shyangboche, Chomay go, Tawoche ri, Lobuche ri, Everest BC, Phanga ri, Thaknak ri and more in some areas.

Access is available as low as US$2.33 a day. It will be interesting to see if this new system really works as thousands of climbers, support staff, mountain workers and trekkers gather next spring. Personally I would still carry a satellite phone as communicating back home to friends and family plus getting reliable weather reports are important to me.

Nepal reverses the crazy Everest 2014 team requirement permit policy that required original team to climb together if they wanted to use their permit. Now individuals can use their 2014 permit once until 2019. Excellent decision by Nepal and puts them on a good track of respecting the customer. source

19 Responses to “Nepal Continues to Play with Everest Climbers – Updated”