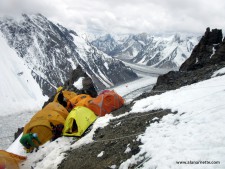 Tight space at Camp 1 on K2

In spite of a bit of conflict on the mountain, everything appears to be in good order in the Karakorum. Summits are expected any day now on the Gasherbrums, a bit later on Broad Peak and next week on K2.

Vanessa O’brien, climbing with Madison Mountaineering, reports she and the team are at Camp 2, suggesting they have successfully climbed Houses Chimney at 20,000 feet. For some this could be their high point because the climbing gets significantly harder from here on up.

So, not sure what’s going on over the Cessan route with the Himex team but David Tait made this interesting post that included:

We lost another valuable day yesterday owning to a small difference of opinion between some of our staff and a third party on the mountain, which dictated a brief hiatus and suspension of our rope-fixing effort. The differences were debated and resolved back at BC in very short order, but nevertheless the day and the vertical advances we had planned were all shunted back 24 hours.

Another team on the Abruzzi, Mike Horn, is looking at getting to C4 at 7500 meters. They appear not to be using supplemental oxygen thus the higher acclimatization program.

Alec Turner who was reported as leaving the Himex K2 team, apparently returned after a tough time with illness and an avalanche scare. He is climbing the Cessan route.

I spoke live with Himex climber Bo Parfet this week from his home in Colorado. He left the Himex team last week evacuated by helicopter after feeling ill. He is fine now and is happy to be home with his sick new-born child. Bo reports that the Karakorum was extremely hot but the route seemed in good condition.

Over on Broad Peak, the Himex team and independents including Al Hancock, continue to make progress hoping reach C3, return to BC then go for the summit soon. Deep, difficult snow has stalled progress for the second year in a row high up on Broad.

Finally, climbers on Gasherbrum I and II are pushing very hard for their summit bids this week. Nic Rice posted this a couple of days ago:

We instead will try and reach Camp II directly the following day when the weather is supposed to be good and the new snow will have had time to settle. We are planning on bringing everything we will need for a summit bid in case the weather decides to cooperate and we have sufficient energy after fixing the route from Camp II to Camp III in the Japanese Couloir.

OK, there you have it, bad weather, tough routes, fights and pushing hard … another typical week in Northern Pakistan.