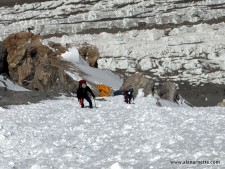 Attributed to heavy overnight snow and warmer than normal temperatures, an avalanche below Camp 1 on Broad Peak has injured several climbers and taken one Pakistani High Altitude Porter (HAP) life. Progress on K2 and the other Karakorum peaks has been stopped for now waiting for the snow to settle and the weather to calm.

Chris Burke has posted a complete update as she is climbing Broad Peak and was at Broad Peak Base Camp when the avalanche occurred. She noted that other climbers rushed to aid the victims and pulled one person out from the debris. While the rescues were occurring, more avalanches were triggered. The injured need urgent medical care but helicopters, operated but the Pakistani military, are grounded in Skardu due to weather.

It is a somber time at Broad Peak base camp – many have lost a longtime friend today.  Many have lost a friend they only recently met.  Meanwhile, avalanches continue to fall in the mountains around us.  We are tired.  We are sad.  We need time to absorb today’s events.

A group of Japanese and Chinese climbers along with Pakistani HAPs and Sherpa were on the way to C1, when an avalanche came down at around 11hrs local time. Seven climbers were swept down the mountain. One of the injured Sherpa called BC and search & rescue mission was launched immediately. Six climbers, including seriously injured Japanese member of Summit Climb team Ms. Sumiyo Tsuzuki, were lowered to BC and given immediate medication. However, a Pakistani HAP of Seven Summit Treks team couldn’t be located. Missing HAP (name withheld as the family needs to be notified) has been unfortunately presumed dead.

I know that section well as I climbed it multiple times in 2006. It is perfect avalanche terrain as it can be wind loaded and sits at a 30 degree slope.

Over on K2, Garrett Madison‘s team has just returned from their first and only acclimatization rotation to Camp 2 but are now sitting tight waiting for improved conditions. he posted:

Because of daily snowfall, and the inherent risk of avalanches, we cannot plan to climb or carry up supplies until the weather improves and conditions stabilize. Currently we will be resting in base camp at least a few more days before possibly making a move up on our summit attempt.

Nic Rice on Gasherbrum also said he was sitting tight:

The weather report I have is not very encouraging, however, I remain hopeful that the usual end of July summit window will somehow materialize and that the forecast heavy snow will not.

Finally Russell Brice posted on his site he did not expect to move up K2 until at least July 26, Sunday. The standard mountain protocol after a heavy snow is to let it stabilize for at a minimum of 24 to 48 hours.

I will update this post with more information as I receive it.

My condolences to the families.

4 Responses to “K2 2015 Coverage: Death and Injuries from Avalanche”