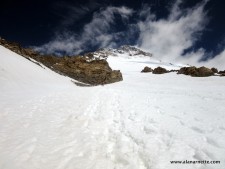 Breaking news on K2 as a Swiss team lead by Mike Horn has reportedly turned back around 7000 meters from their summit bid. They were attempting the summit on K2 via the Česen Route aka Basque Route and had reached their Camp 3. Other reports mention deep snow. It is rare for a small team to be able to fix ropes AND break snow at these extreme altitudes as it is unbelievably physical.

David Tait with Himex at K2 Base Camp posted a well formed update along with very deep introspection that comes on the long high altitude climbs. He made this observation about the Swiss team:

Mike Horne, the Swiss/Sth African superman and his equally talented team left BC yesterday morning and climbed to C3 uninterrupted. This 6-man team is the strongest climbers I have ever encountered. I have briefly run into Uli Stech on the slopes of Everest, but these guys take all prizes.

Another climber, Phillipe Gatta, is reported by his home team to have most likely called off his K2 summit attempt by the Abruzzi route due to an avalanche that buried ABC. This was just posted on Facebook:

Sms from Philippe:
Left for summit attempt this morning. Big avalanche buried all our gear depot at ABC. 18 people digging for 2h without finding anything. Camp 1 might be lost too where we have clothes and food… Expedition probably over… Still digging. Keep you posted.

Note from Anna:
ABC is not a camp where people sleep since it is highly exposed to avalanches. So no people should be touched. It also seems like Mike Horn has gone down from 7000 to 6300 this morning from looking at his tracker but no confirmation…

ABC is used a depot more than a real camp but is crucial as many team store gear there. But more importantly is the fact that ABC sits at the base of a long snow slope that leads to Camp 1. If that slope has become so snow loaded that is is releasing, that does not bode well for the overall route. Of course the flip side is that is has now released. But more snow is predicted to arrive this weekend so the K2 teams have some tough decisions to make.

No firm updates on the progress for the other peaks.

From all indications, the deep, soft snow on all these peaks are making it virtually impossible to summit. Those who did on GII  earlier this week were smart and strong to go when they did

Al Hancock phoned in that he and three other climbers were now at Camp 3 at 7000m on Broad Peak and would leave around 2:00 am local time for the summit. He expects it tot take 12 hours and will update from the summit if/when they make it. Best of luck my friend.

It appears the only team that had substantial  gear at ABC was Seven Summits Treks. No one was at that camp when the avalanche occurred. The remaining teams at K2 BC seem content to wait out this next storm and consider a summit push next week.