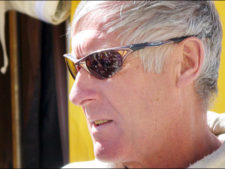 Russell Brice has one of the most recognized names associated with Everest. As I mentioned in an interview I did with Russ just prior to the season he came to notoriety on the Discovery Channel’s “Everest Beyond the Limits” series about 10 years ago.

But few people know that Russ is a world-class climber in his own right. Born in New Zealand in 1952, he now lives in London. He started climbing as a young boy in New Zealand and soon found his way to the Himalayas and Alps. He has numerous attempts and summits on Everest and other 8000m peaks.

In spite of a broken computer, Russ was kind enough to respond to a few questions via smartphone from Everest Base Camp on the Nepal side.

Before we get to Russ, on a very sad note, Min Bahadur Sherchan, 86, died from unknown causes at Everest Base Camp. He was attempting to set the age record and was reported feeling well. My condolences to his family, friends and teammates.

A Sherpa fell down the Lhotse face and was helicoptered to Kathmandu. He is reported out of critical danger.

Also the rope fixing on the Nepal side has stalled due to high winds. Sherpas tried to reach the South Col but turned back Other teams trying to sleep or tag Camp 3 also retreated on Saturday. Some have successfully spent the night at C3 this season in spite of the harsh conditions.

Similar reports from the North Col and higher on the Tibet side. See the Tracking Table for estimated locations.

There is talk from the multiple weather forecasts of a calm period around the corner. Russ suggests this also. If this happens, it will allow the rope fixing team to reach the summit and the teams to spread their summits bids across multiple days.

Q: Russ, we have been trained by you to get regular Everest Newsletter updates. Why none this season?

I broke my computer during the walk in which is a good excuse. Many of my members are writing so is there any need from an old man.? But what i see in this age is many people are telling the world what they are doing…..which is not much. Actually i am spending a lot of time trying to do a lot so i have no time to write.

Q: Can you give us a summary on how the season has gone for Himex thus far?

Oh pretty good. It was quite difficult to organise the Paul Oakenfold (concert at base camp) trip. Paul was a really nice guy who accepted the difficulties of walking into BC and he did a great show. I was not so impressed with some of his support staff and film crew who were so arrogant as so many film crews are these days. It was a big challenge for me to have the support in place that was required but somehow we managed.

I also took on the responsibility to organise the rope fixing to the summit. So we were quite busy packing loads to be carried to C2. We managed to get the permit on 13 April and flew the loads to C2 on 14 April. This saved about 68 Sherpa loads through the Icefall.

As i write this we are planning on fixing rope to the Balcony tomorrow and to the summit on 7 May. Actually  we delayed by one day yesterday as we felt that the wind was too strong today and it is unreasonable to ask Sherpas to work in this wond for the benefit for many climbers who have gone on holiday from Everest.

Q: This season seems to have a lot of wind. Do you feel this is normal or something different going on?

In fact, I feel that this is a very good season. Yes we had a little wind to start. Why people talk about this is because the direction caused a bit of disturbance at BC because of the winds rotations off Pumori.

There was a stray jet stream section that broke away from the normal flow but that did not last long and in fact had generated a much more stable pattern for us now. I see this building up to be a long stable and early season. But what do i know about weather?

Q: What are the the overall mountain conditions up to the South Col thus far? snow, ice, rock, etc?

Not so bad. We see that conditions are quite dry and there is not so much snow on the Lhotse Face but not too much rock fall. It will be hard for the first teams on the ice but after a few teams and Sherpas have been on the route it will become easier. If we have some snow that will help

However the route through the Icefall is very active. We have already had more than 6 collapses that have closed the route. The average temperature is only – 8C at 02.00 third year. The Icefall is more narrow and is moving faster so we need to be careful.

Everyone at BC is asking the Authorities for permission to fly loads to C2 but they have not issued this. We are all very concerned that we might have another avalanche accident. I am also spending a lot of time pushing this….that is more useful than writing newsletters.

Q: Lot’s of talk about how many people are on the south side. Has this been an issue for your team thus far?

No not so many people….i think about 300 plus. Actually i think this is quite manageable especially with the predicted weather.

Thanks again Russ. Best of luck for a positive experience this season.

6 Responses to “Everest 2017: Catching up with Russell Brice”