Progress when climbing 8000-meter mountains is often measured in small steps, and that is what we have this week.  Also, it appears the Nanga Parbat team is heading for a summit attempt. See this post for full background on the K2 and Everest expeditions and the history of winter attempts on the highest two mountains on Earth.

Both the K2 and Everest teams continue to acclimatize as well as trying to establish the low camps i.e. under 7000-meters before moving higher. The main issue has been, is and will always be wind. If it is about 30 mph/48 kph the windchill becomes deadly.

The Polish team is starting to send members up the Česen Route aka Basque Route to scout out conditions. High winds hit K2 a couple of days ago but seem to have calmed allowing further progress.

A big decision was made on Wednesday, 17 January, by Janusz Gołąb and Denis Urubko to skip establishing a Camp 1 at 5,900 meters and move on to Camp 2 at 6,200 meters. This means the climbers will have a very long day from Base Camp to Camp 2 but might save some time in the long run by spending less time on the exposed ridge.

I’m told by their home team that they choose the Česen Route primarily because it was faster. It is steeper than the Abruzzi so these strong climbers should be able to cover more ground faster. Also, it avoids House Chimney and the Black Pyramid which are time-consuming technical rock climbs at extreme altitude.

While Gołąb and Urubko rest, another group of climbers will continue fixing the route and establish C2 over the next few days.

The four Pakistani High Altitude Porters are Sadiq, Amina Ullah Baig, Jalal Uddin and Fazal Ali. They are from the Pakistan valley of Shimshal. Their primary role is to help ferry gear to the camps, not to fix the route even though they have for previous summer expeditions.

This is a nice video at the extreme lower part of the route by Janusz Gołąb and Denis Urubko:

And a good photo from at the beginning of the route. This is their commentary:

Simple approach from base to wall-About 1 hours. Other than in summer – without dodging the podtopionych ponds or getting closer to the kuluarów that can leave something. The team team is heading to the right of Spurs rock, against the wall. 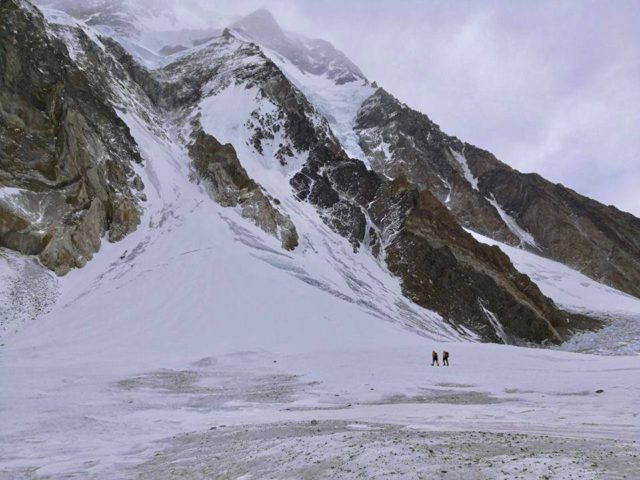 Alex Txikon and five Sherpas have fixed the ropes through the Khumbu Icefall. They have established Camp 1 at 6,050 meters in the Western Cwm and did a day hike to Camp 2 just below the Lhotse Face. Currently, they are climbing Pumori, adjacent to EBC. It’s unclear how high they intend to go. It’s quite common for Everest climbers to go to Camp 2 on Pumori for day hikes and acclimatization. This is an easy hike with no serious avalanche danger. Above C2 to the summit has been dangerous with significant avalanche danger.

From Pumori, there are stunning views of Everest Base Camp, the Khumbu Icefall, Western Cwm, Nuptse, Lhotse and Everest. I took this photo in 2015. 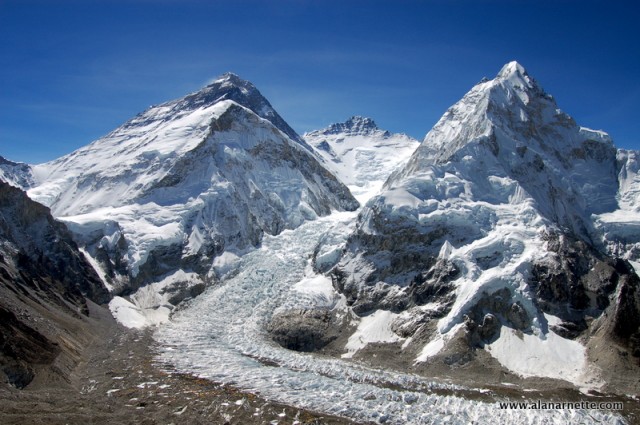 Tomek Mackiewicz and Elisabeth Revol are working their way up NB this winter. They have been experiencing poor weather and have been locked down the past two weeks but today reported the weather is clearing. They suggest they are going for the summit now. They have a cache of supplies at 6700 meters.  This will be the seventh attempt for the 42 year-old Polish climber, Mackiewicz.

There are several other climbs this winter but they are not updating from their base camps so I will list them for reference only: