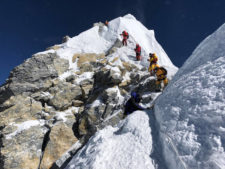 Update 2: Teams are near the summit in what is reported as excellent conditions

Hello everyone, team reported that the entire team is standing on the summit of Everest, as ben mention it was a great summit day not to many peoples, no wind and sunny. Team starting to summit from 6:27 till 7:28 they are going to take photos and starting to decent to south cool soon. Thank you for staying with us. Will be updating from camp for tonight. 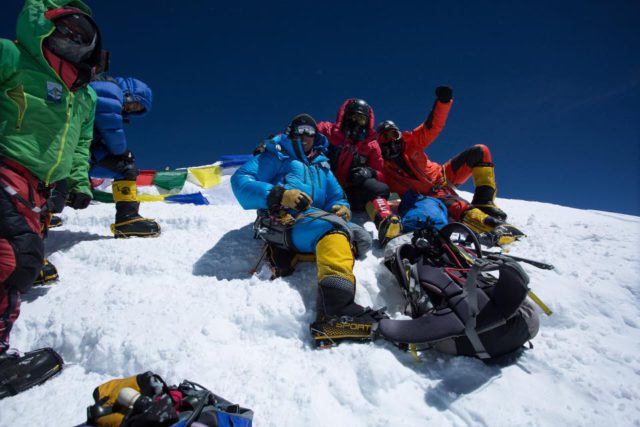 Not sure how I can say this differently than I have for the last eight days, but yet another good day on Everest – with over 40 summits combined both sides. But all of the joy is muted with the death of Japanese climber Nobukazu Kuriki who was descending from Camp 3 on the Nepal side and died. He had been suffering from a high fever and cough all season long. Here is the full report with as much as we know.

Moinz/Benegas summited Lhotse a day after getting Everest. This is the 4th 8000er for Matt: Cho Oyu, Makalu, Everest and Lhotse. Seven Summits Treks had one of their three VVIP members who paid $130K summit:

This morning one of our VIP member Mr. Li Jianhong climbed Mt. Everest along with two more Chinese members Mr. Lyu Jun and Ms. Qu Jiaojiao between 5:30 to 5:50 AM. Ms. Qu Jiaojiao also climbed Lhotse on 20 May together with Jian Chang (China).

IMG reports they had 10 members and 13 Sherpas support staff on the summit. Mountain Professionals had four members and 4 Sherpas on top.

Lukas Furtenbach of Furtenbach Adventures is beaming with pride and joy as he shouts to the world that he was right about acclimatizing at home before an 8,000-meter climb. He joins Alpenglow, and several other climbers on different team in summiting is a relatively short period of time. In all cases they were using supplemental oxygen with flow rates from 4 liters per minute and above. Lukas markets his “flash” climbs with special oxygen mask running at 8 lpm, unlimited oxygen and 2:1 Sherpa to member support. I had to abbreviate his long Facebook post as well as a press release he sent out, but you get the idea. Lucas shouted from the mountain:

Hello world! 100% & 100%, Flash expedition opening new doors … May 21st 2018 was their day. 17 days after entering Tibet and 21 days after leaving their homes. Perfect weather and almost no wind on the summit at 6:30 Nepali time…. our outstanding Sherpapower team (2:1), some of them summiting the second time within 5 days …

So maybe the history of commercial, guided Everest expeditions has to be rewritten? At least a new climbing style was established to the Everest guiding community. Finally, after almost 40 years of standstill without any significant innovation. This is the first time that a whole guided team summited Mount Everest in such a short time (21 days from home) with the help of an acclimatizing program at home. This comes with an increase of safety and a 100% success rate. Not to forget that our Flash members are no professional athletes, they are dentists, consultants or entrepreneurs … Thank you to all climbing community for all the criticism and skepticism, it kept pushing motivation to move on with this idea.

Lukas added a few more details with a message to me today that he felt his 21 day trip was unique and not comparable to anything else anyone had ever done. That he had “real” members. And “members started to use O2 individually in different altitudes – 6600 -8000, one member started only at 8000m. the 8l/min were not used and are only for emergency situations. On summit day all were climbing between 3-6l/min,” Congratulation to Lucas on his victory. They had one guide, four members and 8 Sherpas summit.

Mike Hamill sent me this photo of the Hillary Step taken by guide Casey Grom. It is more like stairs now than an off-width crack. The Hillary Staircase? Click on the image and zoom in for a close inspection. See this recent post where I discussed the controvesery where guides said it had changed but the Nepal Ministry said it was just snow covered. One of the reasons I wanted to get this photo was to show the silliness of the Nepal Ministry of Tourism telling climbers and guides this year, 2018, that they were “not allowed to talk about the Hillary Step.” Once again, not sure of their motive as mountains change all the time. While this is an iconic part of an historic route, being transparent about the change only enhances their credibility, otherwise they will continue to struggle to get rules through that will increase safety, reduce crowds and deaths. 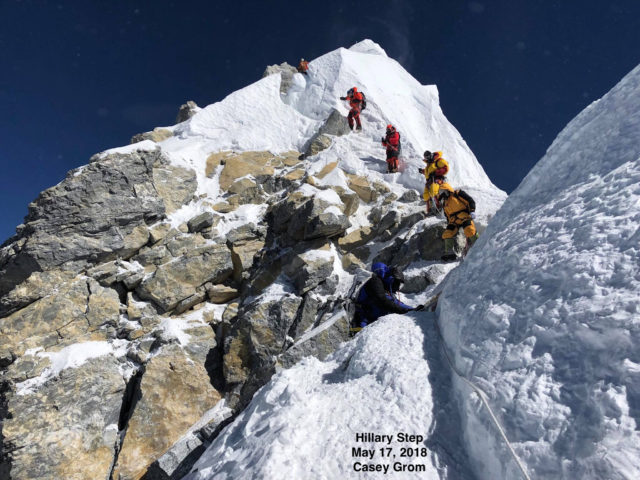 And the tradition photo before 2015: 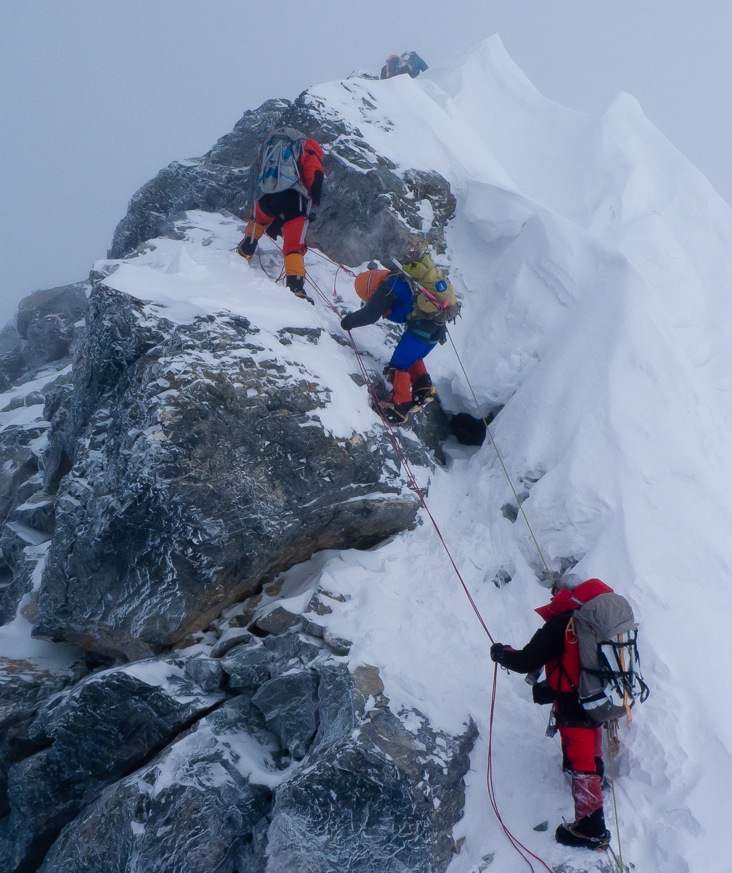 Wave 9 for Tuesday morning 22 May

Alpine Ascents, IMG, and Summit Climb are climbing now on the south side and Altitude Junkies is one one only teams left on the North side. Its good that most teams have compiled their climbs as a typhoon is developing near the Bay of Bengal. The center for forecasting them predicts a full-on storm in 24 hours. While it won’t hit Everest directly, it will influence the jet stream and perhaps bring winds back to the summit.

Well done to all thus far.