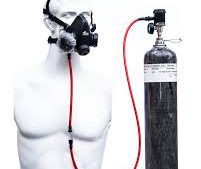 Followers of the Everest 2018 spring climbing season will recall that a few teams experienced a failure of their supplemental oxygen systems provided by the UK company, Summit Oxygen (SO). While alarming, to maintain a sense of perspective, it was 25 out of 500 to 1,000 that regulators failed, not a massive failure as some described. Neil Greenwood, the founder and Managing Director of SO, has sent me an update on what caused the problems the solution. He is recalling several batches of faulty regulators.

First reported by Lucas Furtenbach’s north side Everest team, multiple teams experienced the nightmare scenario of having their supplemental oxygen systems fail above 8,000 meters. It now appears that a combination of high humidity and a manufacturing defect in the all important O-ring in the regulator caused the failures.

When a regulator that manages the flow rate between the bottle and the mask fails, life-giving oxygen is released into the atmosphere forcing the climber to swap the regulator out for a spare and continue their climb or to retreat to a lower altitude where supplemental oxygen is not as critical.

In their forensic analysis, Summit Oxygen found that many of the reported failures were not failures but “operator error” due to broken O-rings or people having stood on the hose between the reducer and flow selector with their crampons.

All of the teams who had failures in 2018, except for Alpenglow due to an unusually large number of failures, had enough spare regulators with them on their summit push to salvage their climbs those nights. There were no deaths or injuries on any team, as a result, the failures.

To update you on the situation regarding the regulator failures during the spring season 2018.  We have concluded our investigation and having carried out extensive interviews with those affected and also those who thought they had been affected, it is now clear that approximately 25 – 30 regulators were affected all on one particular night (15th/16th May 18) with the exception of one incident where one individual was affected the following night (16th/17th May 18).  The problem was without doubt caused by the high humidity levels in the atmosphere during that period (approximately 80% at one point) combined with miniscule leaks on one or both of the piston o-rings.  This is further corroborated by the fact that there have been no previously reported cases of this nature and none since.  The same equipment was used on K2 this year with no reported problems.

I’m currently in Kathmandu conducting the modification to our fleet of rental equipment, our stock of new product and also for our customers who have purchased the products.  Internally, the product drawings have been updated with the modification and the features will be included as standard in all future product builds. 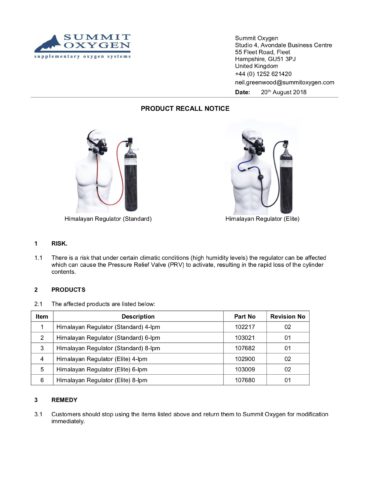 I want to add that all the guides who experienced issues, either through failure or operator error should be acknowledged for their experience and professionalism to handle a crisis with no injuries or loss of life. Also a hat tip to Adrian Ballinger who called me from almost 8,000-meters on the North side as the emergency was unfolding. He asked me to help get the word out so other teams would not be in potential jeopardy.