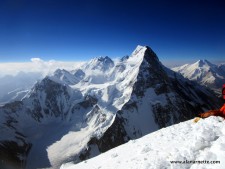 Excellent progress on Gasherbrum and Broad Peak and Jost is on the move on Everest. There are expeditions on K2, Everest, Broad Peak, and the Gasherbrums plus a few others.

Taking advantage of lower winds, but still, mind-numbing cold, teams from Everest to Broad Peak are climbing and establish the high camps. By either definition of winter, there is still plenty of time but they need to jump on every opportunity. Some teams are comfortable summiting using the meteorological definition of the seasons that begin on the first day of the months that include the equinoxes and solstices thus February 29, 2020, would end winter. The astronomical definition uses the dates of equinoxes and solstices thus winter would end when spring begins on the spring equinox. For the Pakistani peak that is 20 March at 08:49 and for Everest it’s 20 March at 09:34. source I went deeply into this last year on this post.

German alpinist Jost Kobusch, age 27, is on the move according to his tracker. His GPS coordinates map to 6,033 meters/ 19,793 feet on the Lho La Pass. Base Camp is usually around 5,273 meters/17,300 fee. He had posted on Facebook that he and photographer Daniel Hug were going to 6,000 meters at the top of the Lho La Pass but the big winds and cold temps kept them at base camp for almost an entire week.  You can track his location on this excellent map from 3D Reality Maps. 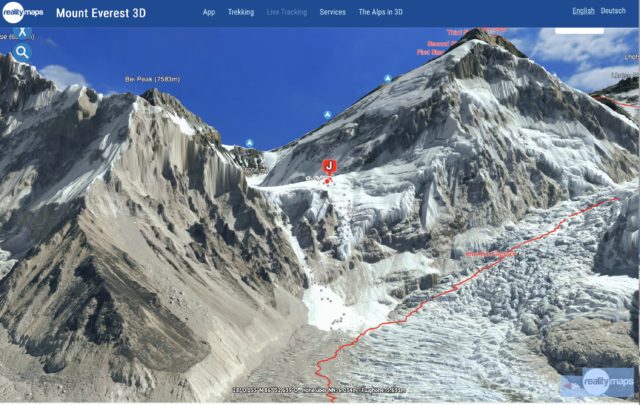 In review, he plans on a winter, solo Everest climb without supplemental oxygen and no Sherpa support. This exact style has never been attempted or accomplished. Jost had acclimatized on other peaks including Amotsang (6,393m), Island Peak (6,186 meters) and Pachermo Peak (6,259 meters).

Alex Txikon and the team have arrived at Ama Dablam Base Camp. They will move to Everest for an attempt on the standard SE Ridge route after Ama. His team includes Spaniard Oscar Cardo, Jonatan García and Nepalese Sherpas Chhiji Nurbu Sherpa, Pechhumbe Sherpa, and Tenjen Sherpa. Txikon posted on Instagram:

Installed in the Base Camp, we are at home. No one has had acclimatization problems and the weather remains stable. Learning from the experience of K2, in four hours we have built an igloo that will be very useful in the coldest nights. We don’t have coverage but InReach keeps me in touch and I can send short messages like this, and greetings to everyone from the foot of Ama Dablam.

Mingma Gyalje Sherpa‘s Imagine Nepal team is on the trek to K2 Base Camp per logistics organizer Wajahat Khan of Apricot Tours.  Mingma will climb without supplemental oxygen. Wajahat passed on that :

They have reached Urdukas camp today. He said the snow was bad but they will reach Concordia on Sunday according to plan. Everyone include the porters are doing well. 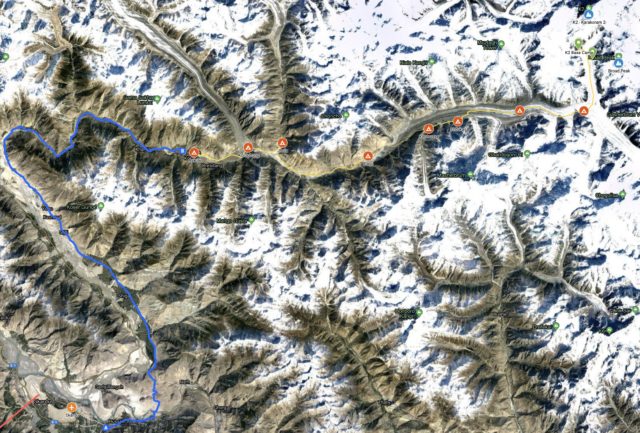 Trek to K2 Base Camp

Denis has made it to Camp 2 before expecting more tough weather on January 19 then went on to tag 6,700 meters.  Denis Urubko’s goal is to complete, what he considers, the first true winter ascent of Broad Peak and then, perhaps, go to K2. He is teaming with Don Bowie and Lotta Hintsa who will not attempt the summit is there to support the two climbers, but she has climbed to C1. Denis sent this SMS to his home team:

We did an hard job

Simone Moro and Tamara Lunger have found a path through the icefall blocking access to GI.  Simone walked a few hours to a nearby Pakistani military post to borrow a ladder needed to cross a deep crevasse. Yesterday Tamara started her post with “The disappointment today was really great. We have the ladder and it stopped snowing, but the danger of avalanches is enormous.” but today has a much happier tone:  They want to traverse the two peaks in a single push via the Gasherbrum La at 6,400 meters.

Finally the way to Camp 1 is open! Even today I traveled 10 km (from Gps) between crevasses and seracs, with Tamara in front reopening the track and me behind carrying the famous ladder on my shoulder kindly borrowed from the military. The weather was good and the intense effort of both allowed us not to suffer the cold. Sometimes I had to crawl or go sideways with the ladder on my back through the seracs and glacier bottlenecks. We left at 9:12 a.m. and arrived at 3:00 p.m. at the point where I thought I would finally put the ladder between the two crevasses and access the summit plateau.

But the surprise silenced us. Everything had collapsed and the crevasse was at least twice as wide and the ladder wasn’t enough. We weren’t discouraged and wandered through the summit seracs and crossed precarious bridges of ice but in the end we found the route which ended with a very deep crevasse, but not wider than six feet. Perfect for the lineup I worked so hard to get up there. Tamara was always in the front looking and finding the way (good) I was behind to be the mule. In the end with the utmost caution and delicacy I positioned the ladder from edge to edge from the deep crevasse.

Perfect!!!!! Now the way to Camp 1 and the upper field is open. If we were to calculate the efforts and the kilometers created by finding the way in this maze, believe me, they are equal to going up and down the summit of any other eight thousand I have climbed. We are told that the Earthquake a month ago collapsed and opened the glacier and also changed the entire route from the military to their positions. I don’t know if it’s true or not, I just know that crossing this icefall in two took 10 days, today I’m really very very tired. Happy and Tamara (with me) relieved from what seemed like an endless nightmare for both of us. Let’s hope the surprises are over 🙏

Lunger posted this update on Instagram along with a great photo:

Great excitement this morning! After a clear night and despite the forecasts, today we got up with superb sunshine enlightening the whole valley! We didn’t give a second thought on attempting to reach Camp 1. We have food provisions for two days and will evaluate once we are there if there is any possibility of approaching Camp 2. 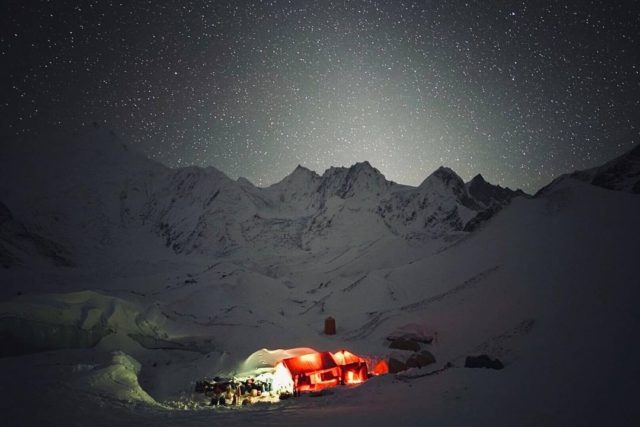 Batura Sar – Traveling to Base Camp

In preparing for a 2020/21 K2 winter attempt, Piotr Tomala,Rafał Fronia,  Wojciech Flaczyński, Filip Babicz, Mariusz Hatala, Kacper Kłoda, Marco Schwidergall and Oswald Rodrigo will try the first winter at Batura Sar, an impressive 7,795 meter peak, located in the western Karakoram Pakistan. They are in Pakistan now. The latest from their site:

Climbers flew out of the Frederic Chopin airport in Warsaw early in the morning. They will land in Islamabad on January 14 at 05:00 local time.

The first two days after landing will be devoted to organizing the caravan and arranging the necessary formalities. On January 16, the expedition will set off by car to Chilas and then to Pass. A few days trekking to the base near Batura will begin in Pass. According to preliminary assumptions, it will be built at an altitude of 4,200 meters. On the trekking route
a lot of snow has fallen in the last few days , and temperatures remain below 20 degrees Celsius.

Batura is the next stage of preparations for the expedition to K2, which is to set off for Pakistan in the winter season 2020/2021. The head of the expedition is Piotr Tomala, head of the Polish Winter Himalayan program. Rafał Fronia is the deputy head of the expedition. The expedition also includes : Wojciech Flaczyński, Filip Babicz, Mariusz Hatala, Kacper Kłoda, Marco Schwidergall and Oswald Rodrigo Pereira, who is an expedition filmmaker. Climbers should return to the country on March 10.

Batura Sar is the 25th top of the world. It was first conquered in 1976. So far, one unsuccessful attempt at winter entry has taken place (Austrian expedition, 1981). In July 1988, two Poles came to the top of this seven-thousanders: Paweł Kubalski and Zygmunt Heinrich.

Zoltán Szlankó will make a winter attempt on Ama Dablam with American Alex Goldfarb. They are now in Namache experiencing rain and snow:

Alex: We left Phakding at about 8:30 in the morning and got to Namche in about 4 hours or so, it was raining the whole day (and snowing later). Close to Namche it snow on the ground, finally looks like real winter. It is still relatively warm, but starting tomorrow seems the temperature is going to drop. We might stay in Namche for one day to dry up.

This from the Himalayan Times: “At least three Taiwanese and two Chinese trekkers, who were also on their way to the Annapurna Base Camp, were reportedly hit by an avalanche near Deurali at Machhapuchhre Rural Municipality in Kaski district,” Paudel quoted trekking guide Ram Saran Shrestha as saying from the incident site.

In Western Nepal’s mountainous regions of Sudurpaschim and Karnali province witnesses the heaviest snowfall in the past two decades. source