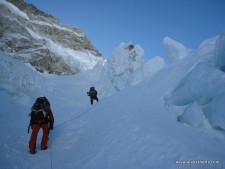 To state the obvious for the millionth time, climbing in the winter is cold, damn cold. Currently, the Karakorum climbers are seeing still air temps of -20F/-29C this week. Even with the best down suits, you have to be very active to stay warm and with most of the climbers doing the slow work of setting the fixed ropes or establishing camps, the chance of frostbite is large. Also, many of the folks are not using supplemental oxygen thus making them even more susceptible to the cold.

Txikon on Southeast Ridge – To C1

Alex Txikon and team are back to Camp 1 in the Western Cwm on their way to overnight at Camp 2.  They are at 6,072 meters/19,921 feet a bit higher than the usual site at 5,943 meters/19,500 feet. He’s made zero mention of the hanging serac that stopped the Autumn 20-19 climbs. I am assuming it released and is no longer a factor. Txikon’s posted this update on Facebook and Twitter

Off we go, toward the Icefall and Camp 1. Greetings from C1! We crossed the Icefall carrying 20kg each and through a partially new path: the strong wind destroyed huge blocks, leaving chaos behind but less danger. Tomorrow … the wind will decide

Jost on West Ridge – Injury Better, Recco Climb to Lho La Base, Now Back at EBC

German alpinist Jost Kobusch, is back climbing, albeit not a lot, due to a foot injury. He gave this recent update on Facebook:

Good news! Foot The foot is significantly better than the last days! Yesterday, I took a closer look at the collapsed route and thus covered the distance that caused the pain. Although stabilized with kinesio, it was quite a strain on the foot, especially the forefoot. In the evening I applied a blood flow stimulating warming ointment. It really kicked in and did its job (so much that it hurt)! 🔥 In any case it helped very well! Today it feels much better and if it stays like this, I can put weight on the foot again!

In review, he plans on a winter, solo Everest climb without supplemental oxygen and no Sherpa support. This exact style has never been attempted or accomplished. Jost has now been at EBC for about a month. You can track his location on this excellent map from 3D Reality Maps.

Mingma Gyalje Sherpa‘s Imagine Nepal team are working to establish high camps on their acclimatization rotations. They have established their Camp 2 at the base of House’s Chimney at 6,600 meters. Normally C2 is at the top of House’s Chimney around 22,110’/6700m. This is not all that unusual since climbing the Chimney takes a toll and if they were running out of light, water, energy, etc. it was a good choice to retreat.  tracker.

I’m back in BC. We manage to fix lines up to 6.600 meters yesterday. According to the wether forecast the wether is bad in the mountain until the 8th of February. We have certain plan of course for our K2 winter expedition, but the force of nature will have the last saying. But still the mother nature decide to warm us up with the sun today after thouse cold days.

The temperature forecast calls for highs around -20F/-29C this week so they are holding at base camp for warmer temps.

Broad Peak – Back at BC, Wating for better weather.

After Denis Urubko climbed to 7,650 meters before turning back due to crevasse danger. They retreated on February 4 to the tiny trekking camp of Urdukas at 4050 meters to breathe some “thick” air. Also, it’s very cold ar their BC, similar to that at K2. There is talk of the last summit attempt February 12 to 20. It is looking less likely that K2 is an option, at least for winter.

Go down to rest. Hope for a stable window of good weather

Denis Urubko pauses just below 7000m on out first foray to Camp 3. We are back in base camp now but Denis later reached 7650m on an exploration of the upper slopes. Looks like the entire route is in for us now, all we need is a decent weather window for the final push.

Denis Urubko’s goal is to complete, what he considers, the first true winter ascent of Broad Peak and then, perhaps, go to K2 within his “winter.” He is teaming with Don Bowie and Lotta Hintsa.

They have established their Camp 1 at 4800 meters. In preparing for a 2020/21 K2 winter attempt, Piotr Tomala,Rafał Fronia,  Wojciech Flaczyński, Filip Babicz, Mariusz Hatala, Kacper Kłoda, Marco Schwidergall and Oswald Rodrigo will try the first winter at Batura Sar, an impressive 7,795 meter peak, located in the western Karakoram Pakistan. The latest from their site:

On Sunday, February 2nd, three climbers wiped three km of route in deep snow above the current Camp I located at 4800 m. a.s.l. A day later, another team consisting of Rafał Fronia, Mariusz Hatala and Kacper Kłoda left the Base in the morning. After a few hours, climbers managed to reach a height of 4800 meters. In the afternoon, the climbers carried all equipment over 300 meters higher and established the final Camp I there. “This will increase our comfort and safety while staying in CI, but above all it will reduce the distance to the pass (height 5,900 m), near which we are going to set up Camp II ”- emphasizes the expedition leader, Piotr Tomala. “If the weather is favorable, our activities in the coming days will focus on ascenting the next meters of the mountain and establishing another camp,” he adds.

Finally, with slow progress on the mountains, let’s take a look at a new 4×4 altitude record. Under the guise of “installing new communication equipment” on the Chilean volcano Ojos Del Salado. They dropped off gear at the huts and then went on to 6,694 meters. The summit is 6,893 meters. It’s a shame they didn’t summit. 😮

The Mercedes-Benz Unimog model vehicles were modified with extra-large tires, motors suitable for high altitude, a variable center of gravity system and more. The previous record set in 2007 also on Ojos Del Salado when a vehicle reached 6,688 meters. Courtesy of Altitude