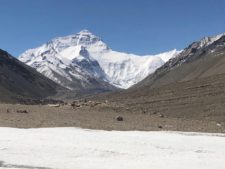 I’ve been speaking with foreign and Nepali operators, plus Nepali officials, about the impact of the Coronavirus on the Everest season. Bottom line is that there are already cancellations but it appears as of this writing the Tibet side will remain open.

Officials tell me they expect the number of climbers to be cut in half on both sides. Nepal issued 382 permits in 2019, but for 2020 less than 250 are now expected. And only 50 on the Tibet side. This does not include support which is about the same as the number of permits issued. Many Chinese climbers plus those from Japan and Korea have already canceled their climbs on the Nepal side. I’m told several operators are switching from Tibet to the Nepal side and a few are considering canceling altogether.

Meanwhile, other operators are doing business as usual. This update from IMG’s Greg Vernovage:

We received an update overnight from Ang Jangbu in Kathmandu about the first Expedition Operators Association  (EOA) meeting of the season.   The local representatives of over 25 expedition teams gathered to review the details for rope fixing in preparation for the upcoming Everest/Lhotse season.   Currently the plan will involve 8 dedicated rope fixing Sherpa from Camp 2 to the Summit, in addition to the “Icefall Doctors” (employed by SPCC)  who will be working on the route from EBC to Camp 2.

The tentative plan is for the rope fixing team to reach the South Col by the end of April and fix to the summit during the first week of May, weather and conditions permitting.  There are many factors that go into the fixing of Mount Everest, and we will be looking forward to getting updates as the season moves forward.  The EOA has ordered the rope fixing gear and will be organizing the helicopter flight to Camp 2 with the gear, under permit from the Department of Tourism (DoT).

Garrett Madison of Madison Mountaineering tells me they are planning for a normal season as does Furtenbach Adventures and Alpenglow. These companies primarily cater to US, South America, and European clients and say they haven’t had any cancellations. The Docs at EverestEr are concerned about the impact and “differentiating between the common Khumbu cough and Coronavirus.”

A report in the Himalayan Times said China planned to close the Tibet side, but in speaking with major operators, they said there might be a one-week delay but are currently told China will keep their side open. Of course, that could change.

There were 876 total summits by all climbers and support on all routes in 2019, and I expect about half that for 2020.