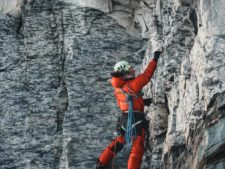 And then there were none. Alex Txikon ended his effort as did Jost Kobuschh. Everest in winter is just too difficult this year. Everyone is back at base camp now. There were no winter summits on the four 8000ers attempted this winter: Everest, K2, Broad Peak, and Gasherbrum I/II. Now, on to the spring season!

Join me as I do my annual coverage of the spring Everest season at this link.

Jost on West Ridge – Over

German alpinist, Jost Kobuschh’s is back down to base camp after tagging his high point at 7,329-meters/23,750-feet. He said before starting the expedition, he would be pleased to tag 8,000-meters so he got close. Well done by any measure.

I have reached my goal 🥳 – the ascent was planned to reach 7200m again and I reached 7360m! I felt great up there and took some pictures. Could even have continued, the weather seemed to be holding up, but my intuition told me: stop – if you want to tackle the summit you should have stayed at least at 7500m-8000m beforehand and voted again be there! That would not have been possible this winter due to time constraints and then walking the long ridge did not convince me (especially since my ligament stretching and my stomach problems already significantly reduce the safety reserves and can always cause surprises).

Yesterday (February 25th, 2020) I got off my Camp 2, which I set up at 6850m, when the snow started to fall. The west shoulder is very exposed to avalanches under these conditions and when I rappelled it washed over me! Luckily I was roped up and secured, so that it was more like going into the whitewater. The most dangerous thing would have been to get carried away and fly down your shoulder. Since my GPS battery was empty, I had last night (February 25th), because of all the snowfall my camp 1 could not be found. So, very old school, I just had to pitch my tent where I honestly had no idea where I was – in the middle of the glacier😅 ! Last night (from the 25th to the 26th) it snowed alot and the conditions tightened again– so it was the right decision to stay! Take a look out for my Camp 1 and descend tomorrow (February 27th, 2020) with my stuff to the base camp

In review, he was attempting a winter, solo Everest climb without supplemental oxygen and no Sherpa support. This exact style and the route had never been attempted or accomplished. You can see his route on this excellent map from 3D Reality Maps. 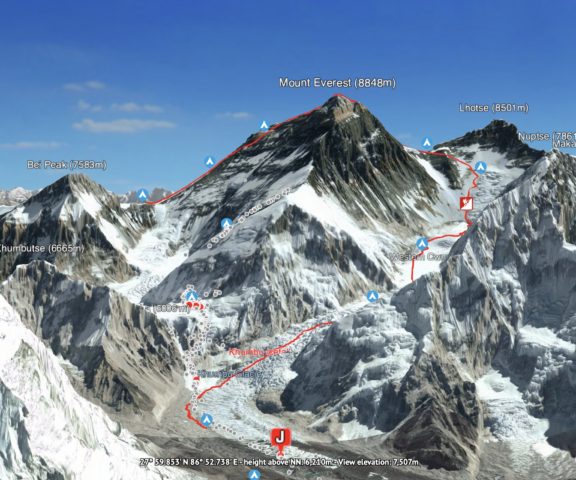 Txikon and Tashi – Over

Alex Txikon and the team were dumped on by unexpected big snow creating dangerous conditions on the Lhotse Face. They have ended their summit plans.  This was Txikon’s third winter Everest attempt. Angela Benavides, Press Manager, sent out this release that read in part:

No way to get to C3. 45cm of fresh, unstable snow on the Lhotse face have proven too dangerous.  We also had some close calls with avalanches yesterday. It’s so frustrating! we’re strong and willing to go on, but conditions are unforgiving. We must go down and, on the way, pass again by the side of Nuptse and the Khumbu Icefall. We will be careful.

As we mentioned in our previous email, Alex Txikon’s attempt on winter Everest is definitely over. The team’s climbing permit is ends on Feb29, so that there is no time to launch a new summit push once the snow on the Lhotse face settle. The team will spend tonight at camp 2. Tomorrow, they’re retrieve all their gear and camps, and proceed down to BC. We will be watching for news and reports from the team, since it is yet to be seen in which conditions will the team encounter the Khumbu Icefall. We will update as soon as the climbers make it safely back to BC.

Seven Summits Treks CEO Tashi Lakpa Sherpa along with Pasang Nurbu Sherpa, Mingtemba Sherpa, and Halung Dorchi Sherpa jumped on Txikon’s coattails at the last minute to no avail. This was their update:

Team decided to return from just below the camp-3. Due, 34 hours of fresh and soft snowfall in blue ice the surface is more slippery seems quiet danger.

After 34 hours of continuous snowfall, it started again with the rising wind. The conditions to become normal takes at least 3 days. So, on that time frame “Breathless Winter Everest Speed Climbing 2020”time frame won’t be able to accomplish. In Nepal 29th February is the end of the winter. So, winter expedition ascent validity is only for end of February.

Therefore, our team Project team and Sherpa decided to end this expedition. Highest Point reached for the expedition will be noted /recorded just below the camp-3.

The team members are safe and they will be back to Camp 2 today.” Despite the challenges in the winter expedition teams have shown the courage to tackle all. This project has shown dream big in the future.

Thank you, everyone, for your support in the journey. We would like to thank International media coverage, local media coverage, media person, colleagues, friends and family who have shown love, encouragement, and courage to this project.

On Friday, February 21, a three-member team left the Base: Wojciech Flaczyński, Rafał Fronia and Marco Schwidergall. The climbers spent the night in Camp first, then headed up. On the way to CII, they managed to free several hundred meters of railing ropes from snow and ice. The action was hampered by deep snow all the time. The team spent another night at Camp 2 (6,000 m). On Sunday, after several hours of action, the climbers reached a height of 6400 meters. They set up Camp Three there and spent one night there.

On Saturday, February 22, another team started up: Filip Babicz, Mariusz Hatala and Oswald Rodrigo Pereira. After two days of activity, the climbers reached Camp III – on the same day Mariusz Hatala and Oswald Rodrigo Pereira went higher. After a few hours of action, it was possible to reach 6600 meters. Then the climbers went down to Camp III, where they spent the night. On February 25, the entire team withdrew to Base due to deteriorating weather conditions.

Currently, a hurricane wind is blowing above, which forced the expedition to stop operating.

Everest – Over, No Summits

Broad Peak – Over, No Summits

Gasherbrum I/II – Over, No Summits