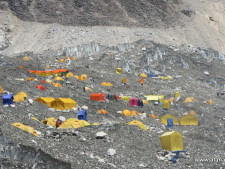 Arriving at Everest Base Camp, on either side, is exciting. In Tibet, it’s a bit calmer because you drive in. In Nepal, it’s the end of a week-long trek. Either way, it’s a sight not to be believed by our fictional climbers.

A small city of over 1,000 people in Nepal, about half that or less in Tibet: the mostly yellow sleeping tents seem to go on forever. With so many large tents, it looks like the carnival has arrived. Then there are the high-end teams with huge domed tents, separate showers, and toilets for men and women, and it goes on and on.

But arriving is a key moment for any climber, especially when you meet the Climbing Sherpa, who will be by your side for the next six weeks.

Welcome to Everest Base Camp

The Mount Everest Guides team of climbers, trekkers, and a few Climbing Sherpas, had left Gorak Shep for the two-hour walk to Everest Base Camp. The trail followed the Khumbu Glacier as it trickled down from the Icefall and Western Cwm. The rocky lateral moraines, the sides pushed by centuries of flowing ice, towered a few hundred-feet in places over the dirt-covered ice. It was hard to understand that the ice was still moving.

Navigating between the many yak trains ferrying gear to EBC along with hundreds of other climbers and trekkers, the scene felt chaotic, busy, not serene, and straightforward as some of the previous days. She felt her anxiety increase as a frenetic pace followed suit. “OK, everybody, listen up. It’s pretty crowded today. There are several large trekking teams on day trips to base camp, so let’s slow down, take our time and not let this get to us.” Guide told the group during a break. “We will end up at 17,500-feet, so tonight will be a tough nite, the highest sleep thus far. Remember to hydrate, hydrate, hydrate.” 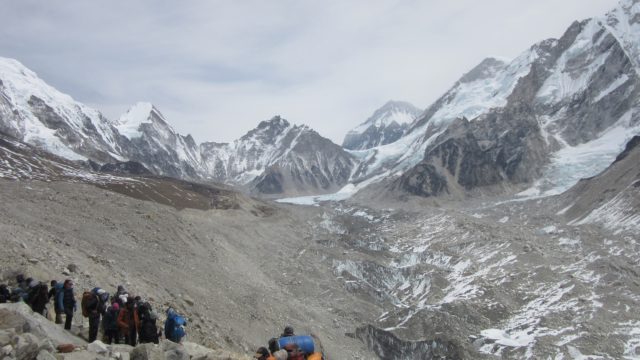 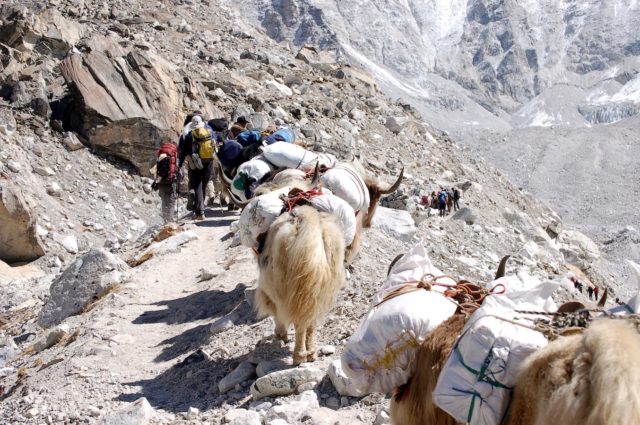 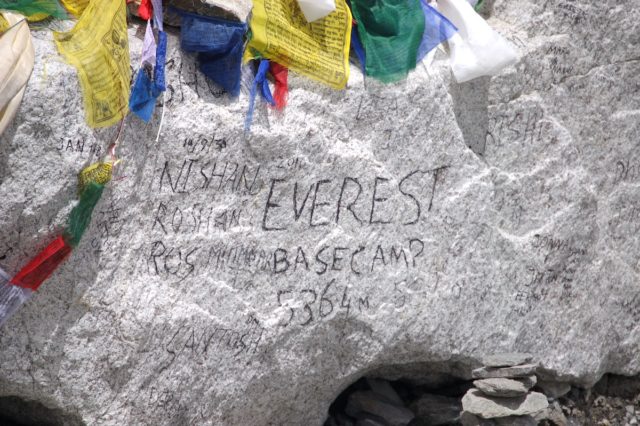 Her last few steps into EBC brought out a mixture of feelings. “Welcome.” She was surprised to have a personal greeting. It was Dawa, he had gone ahead to make sure camp was ready for their Charges. “Please let me introduce you to Mingma. He will be your personal Climbing Sherpa.” This was the first of many times She would look into Mingma’s bright eyes, see his contagious smile. There was a confidence She immediately recognized; no, She immediately felt. He took her hand in a firm handshake and repeated: “I am Mingma; I will be your personal Climbing Sherpa.”

Dawa continued the introduction. “Mingma has summited Everest 17 times, and he has been on over 50 expeditions all around the world, not just Everest. He was on K2 in 2014. He is one of the most experienced Climbing Sherpa on Everest.” Mingma just stood tall and smiled.

He asked her if this was her first time to Everest. “Yes. I hope I will do well. I have trained hard and been on other climbs.” She quickly offered him her resume. Mingma, continuing to smile, nodded, “You will do fine. We go bistari, bistari, slowly, slowly.”

She asked about his family: He lived in Pangboche, with his wife. He had two children, both girls. They were in boarding school in Kathmandu. “Maybe I will have a son one day, but I don’t want him to be a guide. Maybe move to America or Australia and go to college.” In one sentence She felt a connection, a bond. “I have two girls, also both in school.” Mingma smiled broadly. 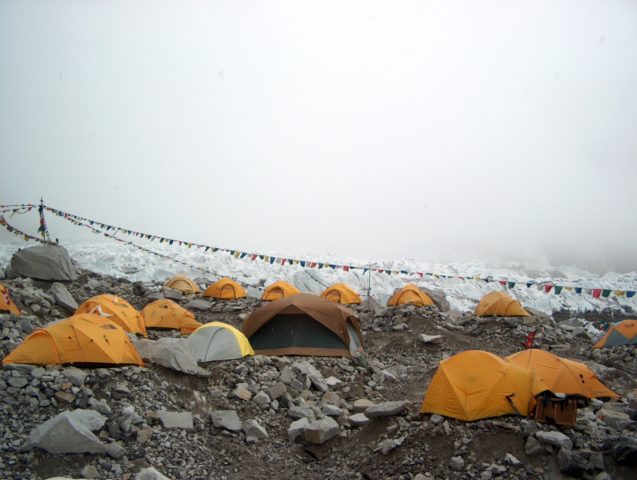 EBC was huge and She was just seeing a small part. It had snowed last night so a dense fog and a white layer covered most of the camp. As She looked around, nine more Climbing Sherpas stood almost in line, similar to a military review. Each offered their hand and said their name. “Welcome to Base Camp. I am Nima. I am Dawa. I am Passang. I am” One by one everyone introduced themselves, each with a warm smile.

She passed one tent filled with more of these unsung heroes of Everest, the cook staff. They crowded around the door curious to get a first impression of their members. She took their picture, much to their delight. “Namaste.” She offered with respect. 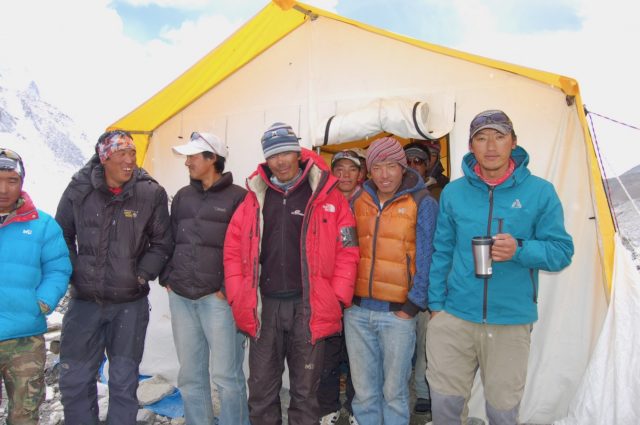 She found herself standing in front of the large yellow tent. This would be a place they would eat their meals: breakfast at 8, lunch at noon and dinner at 6. It was also the town hall, the meeting place, the hangout.

He showed her to her tent, a three-person yellow tent only for her. Each person had a personal tent at base camp. They would share tents higher on the mountain. Her tent was number three in a row of ten. She memorized the location, knowing She will be making midnight runs to the toilet. Both of her duffels had already been dropped off beside her tent. 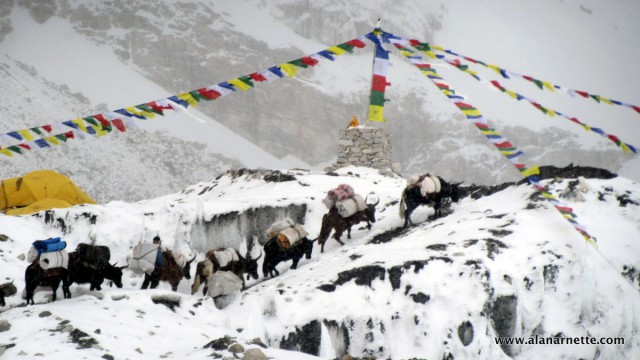 As Mingma left her to get settled into her tent, her mind raced. Her emotions ran the gamut. Her heart raced, her breathing picked up. Was it the altitude, realizing where She was?

She crawled into the yellow tent. There was a small mattress already there, but as She pressed on it, her decision to bring her thick Exped air mattress was wise.

She sat cross-legged, her head slightly brushing the roof. Her boots were neatly placed outside. A lite breeze caused the tent door to gently wave. The bright sun warmed the tent. She took off her down jacket.

A cacophony of sounds took her attention. Conversations were in Nepali, German, Italian, English, Sherpa. The energy level was high; the excitement, determination, and purpose came through in their tone. She heard the hissing sounds of stoves working hard to boil water. The camp was alive.

She returned to her tasks. Slowly She unzipped her base camp duffel bag and began to pull out, one by one, each critical item. She had taken hours to pack and knew where each item was, which stuff sack, the color of each.

First was her sleeping pad, then the -20F down sleeping bag, her camp booties, her toothbrush, and other essential items She would use every day, each nite and be able to grab quickly, including her headlamp, a dedicated one just for her tent.

She took out her small but fluffy pillow, the one non-negotiable piece of “gear” She always brought on long expeditions. She had learned over the years that success on the mountain begins with a good night’s sleep, and a pillow is a must for her. This was unabashed luxury at base camp compared to the high camps where her down jacket stuffed in a soft, cotton pillowcase would suffice.

As She pulled her pillow out of the duffel, the scent of laundry detergent filled the confines of the tent. She pulled it close. She pushed her face into it, deeply, with intention. She drew a deep breath as the smell rubbed off. She smelled like home.

For a moment, She was transported half a world away to those most important in her life. She saw faces, heard laughter, felt love. She smiled. She took out her small picture album. She preferred having printed pictures She could hold than electronic ones on her phone.

With a jolt, She was brought back to the present, her attention shifting to the sound of footsteps. Big footsteps, and a bell. Again, She leaned forward for a look-see. She made eye contact with her visitor.

He was 600 pounds, covered in fur, but had gentle eyes. He could have been a She, hard to tell.

The bell, a yak bell, around his neck, clanged with the resonance of a well-designed church bell. His job completed, his load delivered to base camp, he was meandering around camp, loose from his tether, searching for a bit of lunch. He moved on. 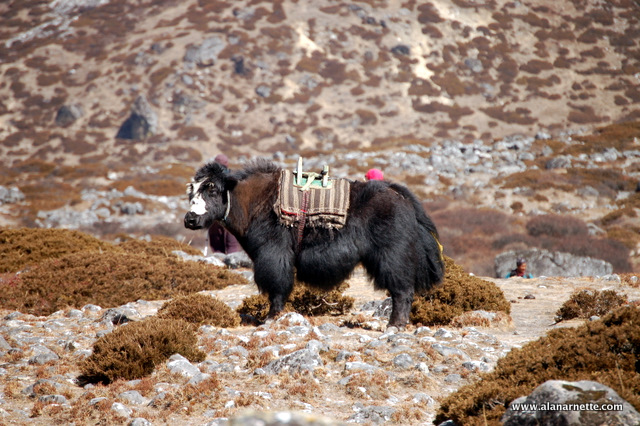 She did a controlled fall backward into her tent, reestablishing her sitting position. She took a deep breath, surprised that She felt winded from a simple move in her tent. Life at 17,500 feet was revealing itself in small ways.

She moved over to her sleeping bag. Lying down, her head on her pillow, She closed her eyes. The breeze encouraged the prayer flags to spread their goodwill. The sounds were a confirmation that She was in Everest Base Camp. Her tent would be her sanctuary, her refuge for the next month.

Her mind drifted as She sunk into the down. The sounds blended together, encouraging her trance. She felt at peace.

She had completed the first leg of a long journey.

Now, it was time to begin the next leg.

“Hey, how’s your tent?” It was Dutch in the tent to her right. “What’s that sound?” She poked her head out of the tent and looked left. “Snorer.”