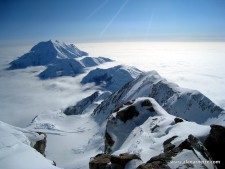 With our Virtual Everest 2020 – Support the Climbing Sherpas fictional story now over (click the link to read it), it’s time to check on climbing for the rest of 2020. Spoiler alert, it doesn’t look good.

China closed all of its mountains to foreigners on March 11, 2020. They made an exception for Chinese and Tibetans who spent 14-days quarantined in Lhasa.

There were 51 summits this spring, all Northside. On May 26, 2020, the eight-person Tibetan rope fixing team of Dorjee Tsering, Tenzing Norbu, Dunpa, Tashi Gombu, Tsering Norbu, and Dorjee were the first to reach the summit. Then on May 27, eight members of the Chinese survey team summitted followed the next day by 14 Chinese nationals supported by 21 Tibetans. May 26 matched the latest summit date since 1971. This year the dealy was due to deep snow.

The new altitude measurement is expected in a few months from the Chinese survey team. Peak 15 has been measured multiple times:

Scientists estimate Everest increases in elevation between 0.5-inch to 3-inches/1.27-cm – 7.6-cm each year. This growth comes from the Indian continental plate tunneling underneath Asia’s. The 2015 earthquake is anticipated to have changed the altitude.

Also, the Chinese took advantage of the closure to foreigners to remove a lot of trash from their three 8000ers. This article noted the cleaning activity started on April 20, and in the three weeks, 3.78 tons of trash was collected on Everest’s Northside, 1.83 tons on Cho Oyu, and 0.425 tons on Shishapangma.

Nepal closed all of their climbing and trekking plus other adventure tourism (rafting, safaris, etc.) on March 13, 2020. The entire country is under a lockdown that is scheduled to be lifted June 14, but it has been extended several times. There are no international flights until June 30. Chances of climbing resuming in the post-monsoon season remain low. I would hesitate to send any deposit money over until the situation is very clear. Most of the cases are in Districts well away from the mountains. The Khumbu has one reported case, and that person recovered.

I’ve been told by many operators outside of Pakistan that they have canceled their summer expeditions to peaks, including K2, Broad Peak, the Gasherbrums, and other treks in the Northern Terrorties. A few of the Pakistani operators continue to have hope that they can delay their trips and still run them. Similar to Nepal, I would be very cautious.

Case and deaths in South America have exploded since my last report on May 11, 2020. There is a wide variety of responses from denial to total lockdowns. It now appears that most South American countries have serious outbreaks, and it is especially bad in Ecuador and Brazil. All the nations are on lockdown. All climbing is currently closed.

Many of the U.S. National Parks are slowly opening to reduced capacities and social distancing rules. In some parks, for example, Rocky Mountain National Park reservations will be required to enter beginning June 4, and a timed entry permit or camping reservation will be required to enter in a private vehicle between the hours of 6 a.m. and 5 p.m.

As for popular climbing destinations, the National Park Service closed Denali and Foraker in Alaska for 2020. Mt. Rainier is on a rolling two-week decision widow and is currently  expected to open above 10,500-feet on June 19.

Belgium has the highest mortality ratio per 100,000 population at 83.05. The UK is next at 58.85. Russia has the third most cases at 423,447 and is still increasing. Many African counties – Angola, Ethiopia, Tanzania, Zambia, Zimbabwe, have low ratios plus total cases and deaths reported.

The highest mountain on each continent serves as goals for many climbers, plus the usual training peaks for Everest or K2. The virus is behaving differently depending on altitude, as previously noted, population density, transportation modes (cars vs. trains/subways, etc.), social habits, and national leadership. So look carefully at the region you might consider and not take the entire country numbers as representative of where your mountain is located. These are my headlines on these popular peaks:

Everest (Northern Nepal/Southern Tibet/China) – Unlikely for Nepal to reopen Everest in Autumn or Cho Oyu/Shishapangma in China. Nepal has seen a recent dramatic increase in new cases suggesting a fast recovery will not occur.

Denali (Alaska)- Closed for 2020 season by National Park Service. Air travel to the US banned from China, Europe, UK, and Brazil.

Kilimanjaro (Tanzania, Africa) – Tanzanian President John Magufuli is downplaying it while the hospitals are reportedly overwhelmed. Tour operators are still running trips but with social distancing techniques. International air travel not available effective April 11, 2020. UPDATE June 10, 2020 – It appears Kili will be opening. Madison Mountaineering sent an email announcing two climbs in August, “Tanzania has opened the Kilimanjaro season, international flights have resumed and they are no longer requiring a 14-day quarantine for arriving passengers.”

Vinson (Antarctica): Polar travelers tell me the logistics company, Antarctic Logistics & Expeditions LLC (ALE), has not made a decision, nor has there been an official decision from the members of the 12 members countries of the Antarctic Treaty who control the continent. The first trip is scheduled for December 7, 2020. The critical link will be air-travel via Chili. Most Vinson climbers transit through Punta Arenas, and Chili has curfew, lockdowns, and quarantines currently in force. However, December is six-months away, and the situation may improve unless there is a second wave. If it were me (and I have no plans), I’d plan on climbing Vinson in late 2021.

Carstensz Pyramid (West Papua, New Guinea): Fears of political and social unrest had already caused many foreigner operators to cancel 2020. Only eight cases reported with no deaths in Papua, New Guinea but 436 in West Papua. Travel is banned from Asian countries and they closed its border with Indonesia.

Kosciuszko (Australia): New cases are dramatically lower than at the peak in mid-March and restrictions are easing but a 2nd wave is feared in late 2020.  International air travelers not allowed.

Interestingly, there appear to be fewer COVID-19 in high-altitude cities. Researchers using epidemiological data from Bolivia, Ecuador, and Tibet found fewer per-capita cases in people living above 3,000m/9842ft. Causality is unclear but perhaps due to a higher tolerance to hypoxia developed by years of living in a low-oxygen density environment. See this article for more details.

I continue to assume no major expeditions for 2020 even if there is a significant breakthrough in the areas of testing, antibody testing, and a vaccine. Experts now expect to limited Phase 2/3 human clinical trials for a vaccine starting in the Autumn, and the best-case scenario for a vaccine is still 2021. Even then, the manufacturing challenges plus the distribution of billions of doses are significant. Our planet has 7.8 billion people.

One Response to “Fresh Update on Climbing Around the World”