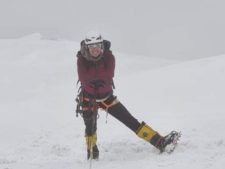 A record 68 people summited the world’s 10th highest peak at 8,091 m (26,545 ft), Annapurna, on April 16, 2021, including 14 women, six of whom are Nepali. One of those female summiteers was, Coloradoan Tracee Metcalfe, who spoke with me from Pokura, Nepal just before she was leaving for Dhaulagiri.

As a way of introduction, Tracee is a physician hospitalist in Vail, Colorado who has a specialty in high-altitude medicine. She is an experienced climber with summits of Everest, Makalu, Cho Oyu, and Ama Dablam. Plus she served as expedition doc on three Manaslu expeditions.

“This was the hardest climb I’ve ever done, much harder than Everest,” Tracee said as she described her grueling summit attempt.  They left the high camp around 1:00 am, traversed endless snowfields before summiting at 2:30 pm – a 13:30 summit push. After resting for a few minutes, she took another 7 hours to return to High Camp where she slept the night, and then took another 12 hours to reach the safety of Base Camp.

Climbing with Expedition Base, she was part of a small team along with Chris Warner and Steve Hart. But Tracee is quick to point out that her climbing Sherpas, all named Passang, were the true key to her summit. She had trained hard all winter in her Colorado mountains and was prepared for Annapurna but like many climbs, you don’t know what you don’t know until you get there.

By design, Expedition Base lagged the masses with Seven Summits Treks. But best-laid plans went array as the SST team hit unexpected delays and were forced back to their Camp 4 to be resupplied by a helicopter from Kathmandu with more rope. Tracee said it was “surreal” seeing the helicopter fly into the High Camp with a load dangling and then to see it leave with a climber, who asked to be flown off, dangling underneath the chopper. 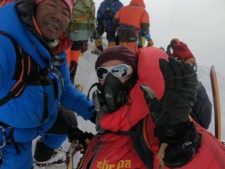 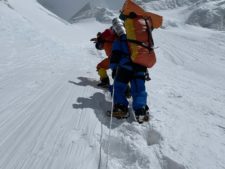 Tracee, Chris, Steve along with the two Passangs and others, made their way higher on April 14, looking to the summit on April 16th. She said the crux of the climb was a narrow gulley between C2 and C3. “We heard someone shouting out ‘avalanche’ and looked up to see the end of the release. A soft brush of power and wind blast touched us. It was then I began wondering if this was worth it.” Later as she struggled to reach the summit, Tracee told me, “I was tired and moving slowly. I began the high altitude negotiation that if I could get this one and get back down, that would be it. I’m finished.”

She talked about the two Passangs who were with her. “I want give full credit to the three Sherpas, both named Passang. The older Passing took such good care of me. I wouldn’t have made it without him.” Also, Tracee said her experience climbing Ama Dablam proved invaluable in navigating the rocky couloirs.

Annapurna is known as the most deadly 8000-meter peak. Before these summits, there had only been 298 summits out of 1874 people above base camp for a success rate of 15.9. 72 people have died for a death rate of 3.84. This compares to a success rate on Everest of 39.16 (second only to Cho Oyu at 42.2 for the highest for the 8000ers) and a death rate of 1.16 according to the Himalayan Database. The female record was smashed with only 18 females summiters total previously and now 14 this spring. Tracee became the fourth American female after Irene Miller in 1978, Brazilian/American Cleo Weidlich in 2012 and Gina Marie Han Lee this year, just ahead of Tracee. 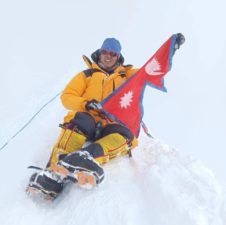 “I spent time with Maya Sherpa and some of the other ladies who summited,” Tracee spoke of her fellow female climbers. “There was certainly comrade amongst the teams but we were very spread out throughout the climb.” 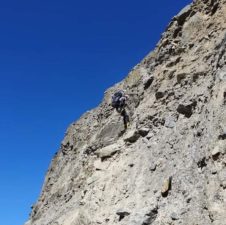 She said the downclimb from Camp 4 was long and tedious. “Below Camp 1 there is a 400-foot high dirt wall. We had to wait for others to come down or go up before we could climb due to the loose rock. It was very dangerous.”

After another few days of rest in Pokora, she, Chris, and others will fly to Dhaulagiri Base Camp for the next climb. “I’m feeling good, recovering from a small frostnip on one toe due to waiting at times on the summit push. But I’m ready to go.”

Best of luck on your double 8000ers Tracee. See you back in Colorado.