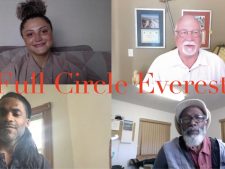 It was an honor to do this video interview with three of the nine members, seven male, and two female, of the Full Circle Everest team. They hope to make history as the first Black climbing team to attempt to summit Everest. As of late 2021, there have been 10,184 summits but only eight Black climbers have stood on the top.

The team is quite diverse with several members holding a Ph.D. One, Abby Dione, is an AMGA certified climber and runs a climbing gym. The leader, Phil Henderson is a longtime NOLS leader and attempted Everest in 2012 with Conrad Anker reaching Camp 3. Two are North Face-sponsored athletes, Frederick Campbell and Manoah Ainuu. Rosemary Saal is a NOLS instructor who led the first all-Black American team to the summit of Africa’s Kilimanjaro in 2018. Demond “Dom” Mullins is is a combat veteran of the Iraq War,  where he served as an Armor Crewman. After service Demond became a National Spokesman for Iraq  Veterans Against the War (IVAW) and worked as a United  States Senate staffer on veterans health and education issues.  See the entire team at their site,

I spoke today with Phil, Rosemary, and Dom about the expedition. We discussed their “why”, who they are trying to reach and of course, all things Everest including their acclimatization and training efforts.

You can listen to this post as a podcast on Spotify, Apple Podcast, Breaker, Google Podcasts, Pocket Casts, RadioPublic, Anchor, YouTube, and more. Just search for “alan arnette” on your favorite podcast platform.