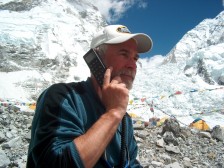 On my first Himalayan expedition, I spent $1 per character to send an email. “Hi, I’m back safely” costs $19! How times have changed.

Twittering from the Top is not unheard of today. Expeditions send emails, pictures and videos from trek to summit – all for pennies. Social media is a key tool for climbers and expedition companies to promote and share their adventures.

The ability to stay in touch is priceless for some climbers. I know that without my satellite phone to call my wife, I would be lost on long expeditions. The opportunity to bring others along on the daily experiences of a climb bring more meaning for some climbers.  But for others, staying connected destroys the purity of their sport.

Between websites, Facebook and Twitter; climbers have the opportunity to share every detail; even those others really don’t care about. In 2005, an Everest climber rated his mental state, relationship with teammates, attitude and even his bowels on a scale from 1 to 10. Perhaps a bit of TMI!

For 2010, social media has taken a strong hold on the climbing community. Google reports over 38 million sites with “climbing” and almost 3 million with “Mt. Everest”. Every serious expedition company has a website. And many individual climbers have a website or blog.

Climbers report during their climbs using nothing more than a sat phone and a PDA or laptop computer. A system that used to cost over $10K can now be outfitted for less than $1K. Sat phone time is now well less than $1 a minute with a direct connection to the Internet. The folks at HumanEdgeTech can set teams up with a one-stop shop from phones to websites.

All this does require some expertise. For example, the low cost SIM card for a Thuraya satellite phone works in Nepal but not in China thus not on the summit of Everest – when climbers want it the most!

Another interesting newish technology climbers are using are satellite-based GPS tracking devices such as SPOT. Last year, Scott Parazynski and Gavin Bate used these types of devices to record their every move up and down the mountain. Their followers could see each move on a Google Map from the comfort of their home.

But with these tools come risks. Technology failures, rumors or honest misinformation can lead friends and families to confusing and unnecessary concern.

In 2009, Gavin turned back at the balcony and we watched his path lead to an exposed edge and abruptly stop. He was fine but left many watchers wondering if disaster had struck. His home team made this post in the midst of the crisis:

There are hundreds of possible scenarios but nothing at present can be confirmed until we hear from Gavin. Due to his lack of contact we can only assume that he is either higher up and queuing to summit without the tracker or on his way down and the phone battery has died with the cold weather. Obviously laptop and hence twitter updates cannot operate without the sat phone link up.

Tim Ripple of Peak Freaks kept everyone informed throughout his team’s expedition using Twitter.  Tim tweeted “Everest 27,000 ft.. we are alive and well. We weathered the extreme winds, buried in our tents. Heading for the summit tonight at 21:00hrs [9:02 PM May 17th, 2009]”. Tim will be back in 2010.

Everest is now used for serious advertising. In 2009, Eddie Bauer launched their First Ascent line of climbing appeal with a multi-million dollar expedition complete with Ed Viesturs, live blogging, on-mountain camera men and film editors. It was an amazing example of technology. Not be be left out is the Discovery Channel’s television series. Finally, the father of all Everest films is IMax Everest.

I wanted to see what an experienced commercial guide thought of today’s social media and blogging during climbs. I asked Guy Cotter, principle of Adventure Consultants for his thoughts. Adventure Consultants has been posting real-time updates from their climbs for over a decade on their website plus now use Facebook and Twitter. Their on-mountain technology has advanced along with the latest technology. Guy makes it available to his members.

Q: How has the Adventure Consultants (AC) website evolved over the past decade?
It’s become our main resource for folks to find us and interact with our team all the way over here in New Zealand. It has grown significantly larger and has loads of useful information for our guests and climbers in general to absorb.

Q: AC has been posting live dispatches from your climbs for over 10 years. What do you see as the benefits of posting your expeditions for the public to watch?
The dispatch pages are some of the most active pages of our site, and team members on expeditions love how the information goes out daily so that their friends and family can follow their adventures. It’s pretty exciting seeing what is posted each day and for all our team it’s the first thing they look at when they arrive at work in the morning! Travel and climbing are both activities that can enrich your life, and to be able to share it with your wider network via the web adds another dimension to each journey.

Q: How is AC using Facebook today?
We’ve quite a large family of members here at AC and we find that Facebook helps us keep in touch with everyone with ‘insider’ details on what’s going on in the world of climbing and at AC.

Q: How is AC using Twitter?
Both to follow key expeditions with brief updates of their progress and also to highlight articles of interest on the web about climbing, guiding, high altitude expeditioning for our followers.

Q: Do you see any complications when your members also post dispatches?
We brief our team members to be sensitive to other teams and the current situation when updating their own web blogs but yes there is the potential for mis-communications and mis-reporting to occur.

Q: Does all this real-time communication increase the opportunity for confusion during accidents?
Yes and no, yes in that there is the potential for the wrong information to be published (and then sometimes retracted, which is very confusing and happened a lot on websites covering Everest in 1996) and no because we can get relevant facts about what is actually happening out to people who are following any particular situation.

It is interesting seeing some of the blogs/dispatches that come out and how sometimes there are discrepancies in what has been written and what has actually happened. It’s important for people to realize that a blog/dispatch is only one person’s point of view and not necessarily intending to provide balanced media like the mainstream media attempts to.

Mountaineering used to be something that occurred a long way from anywhere and news was slow to get out. Electronic media now makes it all the more immediate and hence people can follow an expedition’s daily progress with the flick of a switch. I think this is a cool thing as more people can share in the experience without necessarily having to be there.

One of the first websites I remember visiting as I took an interest in Everest was mountainzone.com. They chronicled the climbs of Everest and other Himalayan peaks and did a great job with interviews and insightful articles. Their real-time coverage of the 1996 disaster was novel at the time. But for those not on the Internet in 1996, most waited for Jon Krakauer’s’s extensive article in Outside magazine – not the website, the printed magazine :).

Today, many websites report on climbing, adventure and Everest. There are many well-known sites and then those that range from adventure in general such as The Adventure Blog to ones that specialize such as Mount Everest: The British Story for UK climbers.

My site has a twofold purpose. I post dispatches during my climbs to share the experience and then I provide annual coverage of each Everest season to publicize the need for Alzheimer’s research. I take my reporting seriously and it with respect. However, with so much unfiltered information available, the opportunity for confusion is a strong possibility.

Sadly, the Everest climbing season brings accidents with injuries and sometimes death. My policy is not to comment until I have a first hand witness report and preferably from more than one source that confirms the story. Then I do not report names until it is clear the family has had an opportunity to be notified. My goal is not to be first, but to be sensitive and as accurate as possible in each situation.

Today, I updated my Everest 2010 Season Coverage, with each climber’s and team’s Facebook and Twitter pages and the current link to their website. Some are very active, others not so much. But you can follow your favorite team directly if you like.

Even with the downsides, all this technology opens the world of high high-altitude mountaineering to millions. Clearly it is fully up to each individual climber and team if they want to report on every movement (so to speak); just use the technology to stay in touch, or exclusively for an emergency.

So for all the Everest 2010 climbers and teams, be safe and thanks for letting us tag along.

3 Responses to “Tweeting from Everest”