After 10 days of trekking and travel we have arrived at Manaslu Base
Camp on Saturday, September 7, 2013. The team is doing well and everyone
is in good health and spirits.

The trek can be described as I’m glad I did it but wouldn’t do it
again in the monsoon season. I can only imagine how spectacular it is in
November without the rain and low clouds. So let’s get this out of the way.

The drive out of Kathmandu was slow and tedious with a lot of road
construction and it got significantly worse as we transferred to a
heavily modified high clearance bus to travel the extremely rough and
muddy road to the small village of Arughat at 1,870’/570m. This is where
our trek began.

It rained intermittently, the heat was oppressive and the humidity was
severe. These conditions remained for the next few days until we broke
9,000 feet. If it sounds uncomfortable, it was, but there was much more
to the experience.

Each morning we arose around sunrise, had a fully cooked breakfast
before walking for 2 to 4 hours. Lunch each day was again a hot meal
accompanied by local fresh vegetables picked from a teahouse garden.
After another several hours of trekking we arrived at our camp for the
night. Usually it began to rain around 3:00PM each day. But the Altitude
Junkies (AJ) porters and Sherpas had the big dome tent set up with
tables and chairs so the rain fell harmlessly.

I often joke with friends about expeditions who only advertise their
“delicious food” and I sometimes mock those dispatches who talk about
the “great food” and not the actually climbing. So I’m about to join
this crowd! I have been on a lot of treks and expeditions and have never
eaten so well. I have absolutely gained weight. The meals are fresh,
creative, balanced and nutritious.

Considering the cook team had to trek along with us, set up their
portable kitchen, cook, serve, clean and pack back up three times a day
they are a case study in organization and leadership. Now that we are at
Base Camp, it will only get better. By the way, the AJ cook is Da
Pasang, a Sherpa cook who can compete with the from anywhere in the
world for expedition cooking.

The trek itself followed the Budhi Gandaki River. I have rarely
witnessed such a powerful force of water over so many days. Of course
all the rain is the driving force feeding it with streams and endless
waterfalls. We started at a very low altitude of only 1,870 feet and are
now at 15,750 feet at Base Camp. Just another 11,009 feet to the summit!

The terrain started with open areas of rice fields nurtured by the
Gurung farming villages. Soon the terrain narrowed into sharp, steep
rock walls creating a canyon just wide enough for the river itself and a
narrow trail carved into the steep walls. We followed the centuries old
dirt trails that serve as the primary road way for the local villages.
We crossed countless bridges from somewhat modern steel cable rigs to
ancient wooden ones with rotten slats. No cars, motorbikes, bicycles
allowed – nothing motorized – only feet and hooves.

Each day brought new sights of the terrain and the culture. It was like
moving through time, backwards. As the canyon narrowed, the waterfalls
grew more impressive. I ran out of words to describe what I was seeing.
The monsoon clouds hovered low above the narrow gorge obscuring the top
of the rock walls but the waterfalls betrayed the drainage of the higher
terrain.

The falls ranged from trickles to raging torrents that exploded in a
sparkle of water droplets illuminated by the filtered sunlight. Some
waterfalls were quite wide, more like a falling lake than a rushing
river. Nature put on a show that humbled anything man could render.

One day, the low clouds broke long enough to reveal a jagged snow
covered ridge line leading to a sharp summit. This “small” 6000m
mountain reminded us of why we were here.

The culture was equally impressive and revealing. The low areas reminded
me of my early treks through the Khumbu. Given we are at the end of the
monsoon season and the trekking seasons has not begun, often we were the
only westerners on the trail. Our schedule is necessitated by the brutal
winter snows on Manaslu that start in late October.

Walking through the villages, we were met with smiles and greeting of
“namaste” by the adults and children. Many children were in school
uniforms, eager to practice their English. “Namaste! Where are you from?
What is your name, My name is …” a dialog repeated often and with
pleasure on both sides.

As we rose higher, getting closer to the Tibetan boarder, the culture
shifted from Nepali to Tibetan in the Bhotia villages. Long straight
black hair adorned bronze faces with smooth features. The turquoise
jewelry spoke to their heritage. They walked proud whether carrying a
basket full of vegetables, or a tiny new born child.

Women wove garments and rugs on centuries old looms so focused on their
work that they were oblivious to our passing. Men cut lumber using long
saws, one on each end to skillfully create the wooden planks used to
build homes.

The final day took us through a very primitive area. Building made of
stone, no wood, created villages. The Tibetans who lived here smiled as
we passed, pressing their hands together as they now said Tashi Dhelek
instead of Namaste.

One old woman sorted wool taken from sheep or perhaps one of the yaks we
saw earlier that day. A group of women gently braided the hair of an
elder woman showing her resect and admiration. They laughed easily with
one another as we passed by, again seeming to not even notice us.

Once at Sama Goan, the last village before base camp, we saw a building
boom driven by an impressive display of human strength and ingenuity.
Knowing that the Manaslu Circuit is gaining popularity the entrepreneur
spirit is bringing new tea houses and commerce.

It was amazing to see the skilled work underway to build the
accommodations complete with electricity and perhaps internet, when it
is working! However, there was a sense of loss seeing the villages join
to the modern world yet good to see the benefit of making for a better
life for their children.

One tiny boy had an injury to his neck, A rather large Japanese
expedition had arrived by helicopter the same day we trekked into Sama
Goan. One of the Japanese climbers was a Doctor. She carefully ed
the small boy’s injuries – giving back.

As always, the trek to a Base Camp is a special time for me. Whether on
the Baltoro in Pakistan, the Khumbu near Everest or the approach in the
jungles of New Guinea, all represent the diversity of the human race;
the need to accept differences without judgement, that the simple smile
is a universal greeting.

We will take a few days to rest up after the trek and adjust to the new
altitude before, weather permitting, we begin our climb of Manaslu. I’ll
do another post on our Base Camp in a day or so. 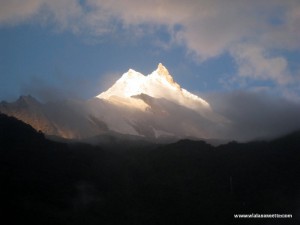