Base Camp for any long expedition becomes home away from home. You
establish walking routes between tents, viewing positions of the high
mountain, and meeting spots with other teams. Your tent becomes your
private re, and the dining tent is the common area.

We arrived on Saturday and have spent the last couple of days getting
settled. We had our Puja today, September 10, and will go for a short
day climb to Camp 1 on the 11th.

I am quite pleased with our excellent Altitude Junkies Base Camp.
Sitting on the rock moraine of a receding glacier, we have the usual
assortment of tents: sleeping, dining, cooking but there are also two
dedicated toilet/shower tents with on-demand hot water and sit down
toilet. I took a hot shower yesterday, my first since leaving Kathmandu
and can report it was excellent.

I’m currently writing this update in the communication tent complete
with table, chairs, lights, solar and 12 volt battery access for power.
Phil provides four laptops. There are multiple Bgans, hi-speed devices
that connect laptops to satellites for internet and email access. Phil
charges us at his cost with no markup. All this works well but is still
a bit expensive so everyone limits their activity to emails or, for me,
a dispatch of two :), no surfing the internet. It is the nicest
communications setup I have had on an expedition.

We also have a huge tent used to store the group gear, food and our
duffle bags so our sleeping tents stay clean and uncluttered. While
those of you not familiar with expedition base camps may laugh at all
this, others will recognize these luxuries as not often seen on
Himalayan expeditions. All things considered, it is a very comfortable
setup and allows us to stay focused on the climb through good nutrition,
hydration, hygiene and rest.

We are surrounded by high rock walls some covered in glacial ice. An
occasional avalanche creates a loud bang causing everyone to stare in
earnest but they are far enough away so as not to present a danger to
Base Camp. The view of Manaslu’s iconic east pinnacle dominates the view
to the west. The true summit remains hidden away but we can spot our
high route and where our Camp 4 will be located high on the snow covered
ridge.

We are sharing the overall area with many other expeditions including
five from Japan (quite normal for Manaslu), a small two person duo from
Slovakia, a British Army team and a rather large group from Russell
Brice’s Himalayan Experience. There are fewer teams than in 2012 with
many returning to Cho Oyu as their autumn Himalayan expedition. But Cho
Oyu remains uncertain each year with the Chinese politics so Manaslu in
Nepal seems more reliable. Both Manaslu and Cho Oyu are often used by
aspiring Everest climbers for training and of course they are two of
only 14 8000 meter mountains on the planet.

As usual with most expeditions, there has been drama. All teams hire
local porters from Sama Goan to ferry gear to Base Camp. While still a
mystery, some of our group gear including a down jacket, oxygen masks
and a solar panel went missing on the trip up. Of serious concern, some
of the fixed rope just above Base Camp put up by HImex was removed.

Phil Crampton and Russell Brice went down to Sama from Base Camp to meet
with the village elders. They reported a productive meeting and the
elders understood the seriousness of trust and the implication for
future business. The missing rope was found and the search is on for the
other gear. None of the missing items will put our climb at risk and
Phil has spares.

Manaslu is known for bad weather and thus far it is living up to its
reputation. Each day at Base Camp we have seen low clouds, mist and
heavy downpours. This is expected and should slow around mid month when
we start the serious climbing. I spite of this we are remaining active.
Yesterday, Paul, Louis and I went for a short walk gaining about 300
meters above base camp. It is what is termed an active rest day designed
to keep our red blood cells production on track.

We had our Puja this morning in a mix of rain and snow. A younger Lama
hiked up from Sama Goan to conduct the ceremony. It was quite longer and
more detailed than I have previously experienced. This was on the
request of the Sherpas after last year’s problems on the mountains.

If you are not familiar with a Puja, it is a ceremony where the Lama
chants from centuries old Tibetan prayer books to the sounds of a drum
and cymbals. Everyone gathers around a rock chorten adorned with figures
made from sampa, or wheat powder. There are a series of events when
everyone tosses sampa and rice three times into the air towards the
mountain. We also brought all our climbing gear to the ceremony:
crampons, ice ax, harness and boots to be blessed. The overall purpose
of the ceremony is to ask permission to climb, for forgiveness for
harming the mountain with our sharp tools and for overall safety for the
team.

It is a serious ceremony for the Sherpas and an opportunity for us to
respect their beliefs.

The word on mountain conditions is favorable. The route seems to be in
good shape. In fact the track used by the spring expeditions is still
visible through a spotting telescope. Many of you know that just last
year at this time eleven people were killed by an avalanche at Camp 3.
The serac that collapsed last year triggering the deadly avalanche
appears quiet as seen from Base Camp. Rock is now visible where
previously there was deep snow thus it is believed to no longer present
a danger.

There has been little new snow over the monsoon so the lower mountain is
quite dry with the multiple crevasses wide open. This is good as it is
safer knowing where they are but the Himex Sherpas have been stalled
getting to Camp 2 having to weave a new route around the open gaps in
the glacier. This is not a serious issue. They will be putting in a few
ladders for us to use to cross the crevasses.

We are all quite eager to see the route for ourselves.

So, all is good thus far. It is good to be back on a Himalayan
expedition. We are all settled into our routines and getting along well.
The view of the mountain is unbelievable standing high above the smaller
6,000 and 7,000 meter hills. It is rare to have such a clear,
unobstructed few of the objective from base camp. Seeing Manaslu right
in front of us is a constant reminder of why we are here. We have
enjoyed seeing other teams leave the Base Camp area on an unbelievably
slow walk higher knowing our time is next.

This afternoon we are sorting our gear for our first climb to Camp 1.
There is an air of anticipation in the air. Yet with all this activity
and excitement, I miss home and all things there. 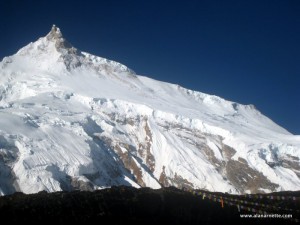 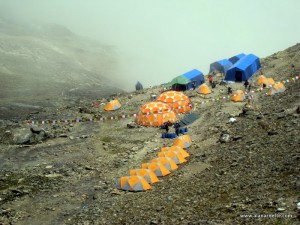