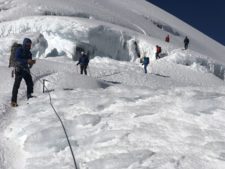 Our Mountain Madness team summited Cotopaxi, 19,348-foot/5897-meters, around dawn this morning January 25, 2019. It was a good climb with everyone making it except for one member who sprained an ankle on Cayambe and stayed in the hut.

As is normal for these climbs, we left the hut at midnight to climb in the early morning hours to avoid the weather that always develops near the equator. 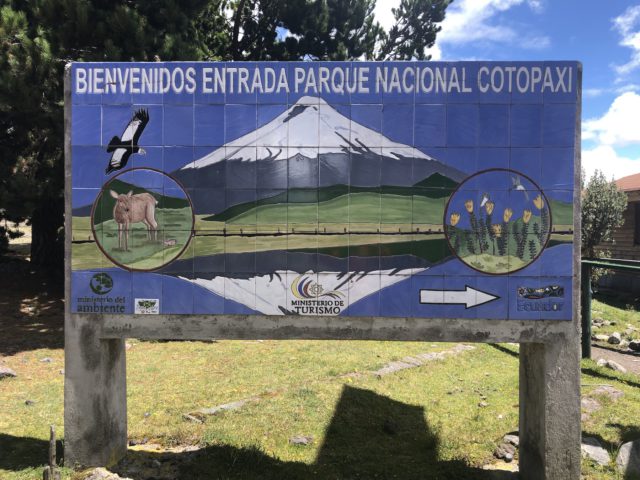 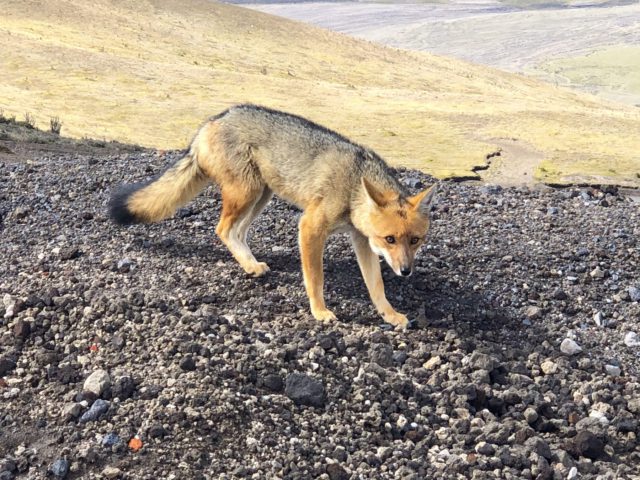 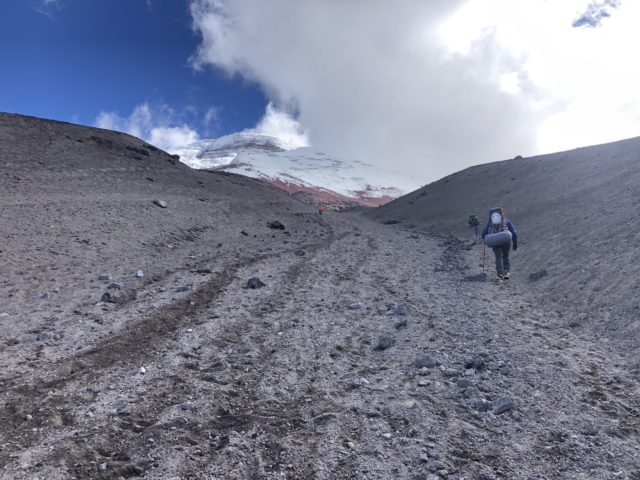 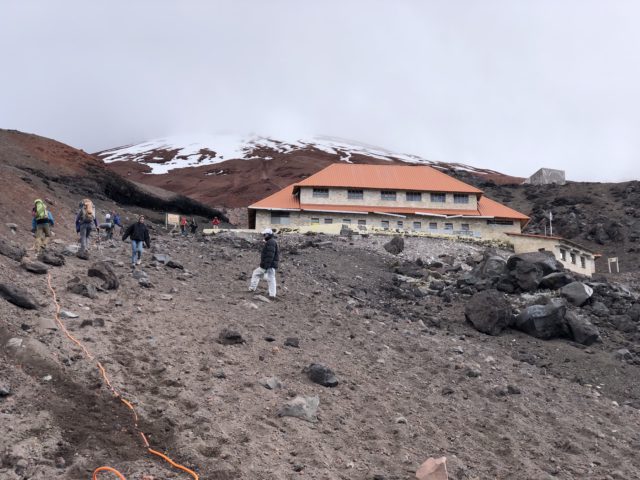 Coto has a nice hut perched at 4,800 m (15,744 ft) on the flanks of the active volcano. The hut has an active history especially when in 1996 on Easter Sunday when an avalanche partially buried the hut along with dozens of tourists. It holds about 90 people in two large dorm rooms with bunk beds and the caretakers serves dinner and breakfast, including at midnight when everyone takes off for their summit push. Another “interesting” point of the hut is that the road ends about 1,000-feet lower thus encouraging anyone wanting to visit, or climb, to hike the dirt path carrying all their gear –  good training! 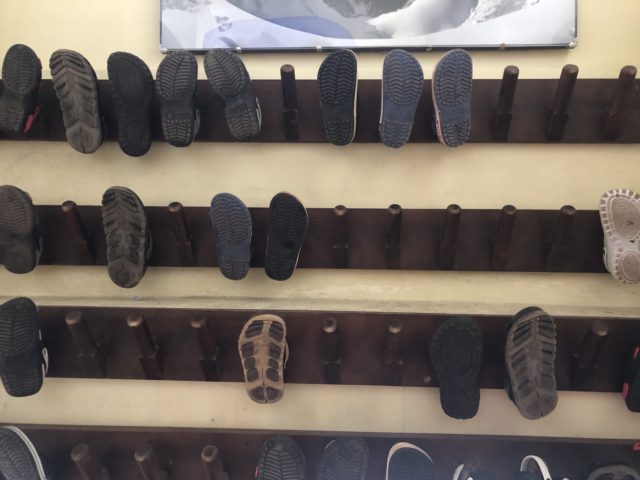 Loaner sandals in the hut for anyone 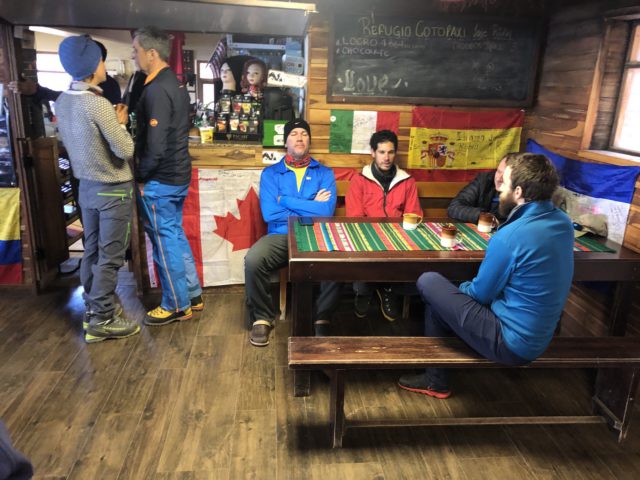 We arrived around 4 pm yesterday, visited and enjoyed dinner then promptly went to bed. The 11-12 wake up call (via our watches and anxiety) came on time and after a light breakfast of rolls, jam and coffee or coco, we were dressed, packs loaded and out the door. The skies were perfectly clear but the wind was gusting to 15 mph, and sometimes twice that speed. 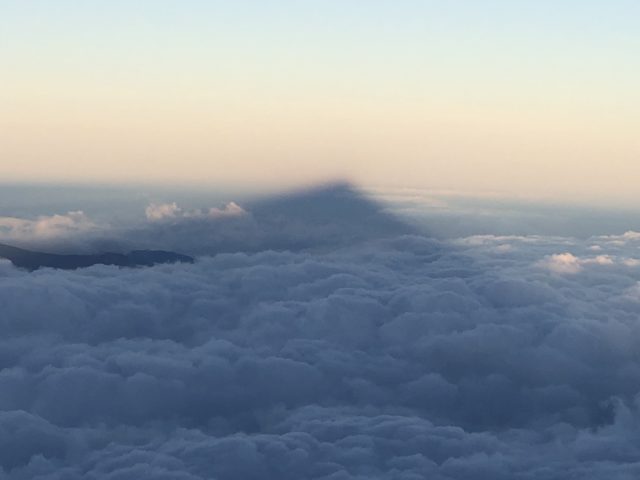 Shadow of Coto at dawn 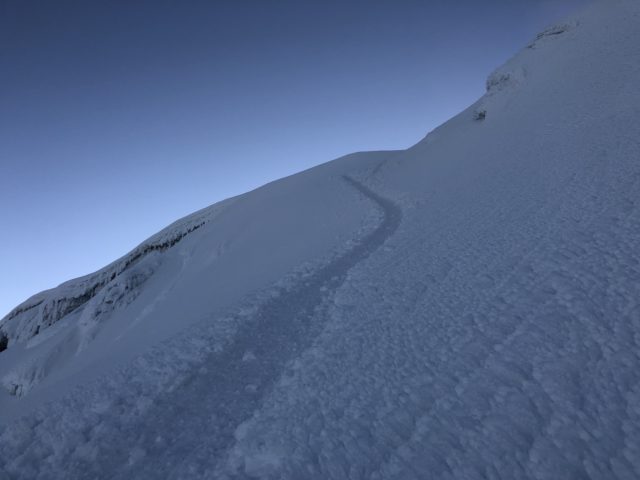 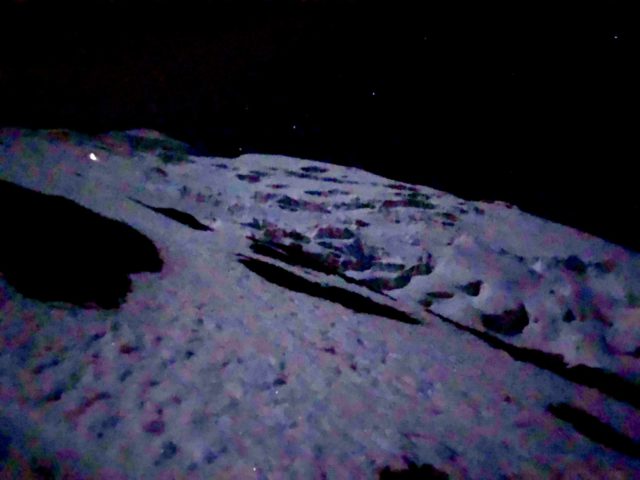 The lower part of the route is on red dirt with switchbacks but soon meets the glacier. There we put on crampons and donned ice axes. The temps were in the lower 40sF but the wind kept you alert.

Climbing Coto is not technical as in using extra climbing gear (protection, cams, pitons, ice screws, pickets, etc) but is what I would considered “sustained”. After all think of a volcano’s shape – it’s basically a cone with steep sides all around. Cotopaxi is no different. The route starts somewhat steep and gains in angle as you gain in altitude. In general, the last third of the climb was the steepest with angles ranging from 30 to 50 degrees. It was a bit exposed and in some sections, a fall would be serious.

We climbed roped together in groups 2 to 3 to protect in case of falls into a crevasse. There were several but two that were quite large. Both had stable snow bridges that allowed for easy crossing but in some years, ladders are put across the open cracks. 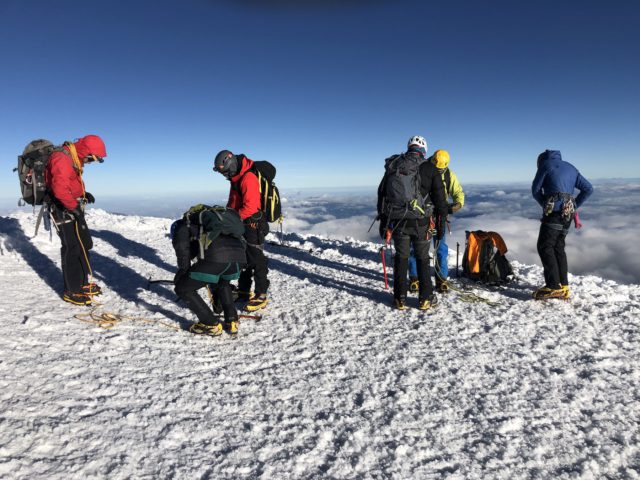 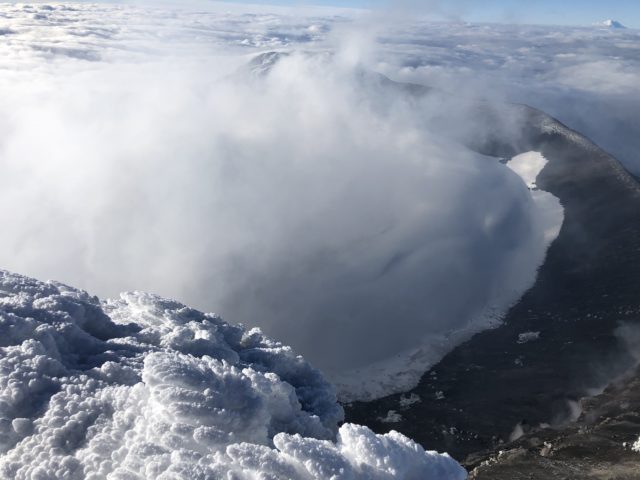 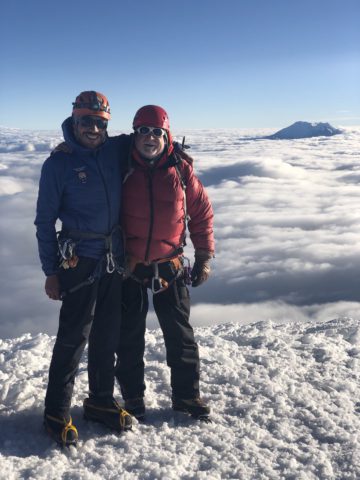 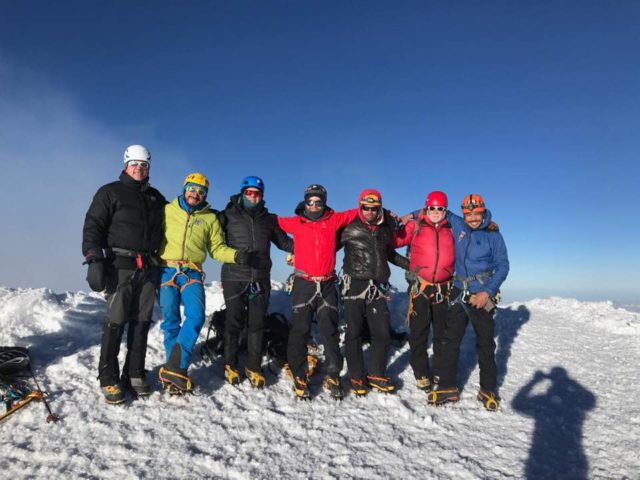 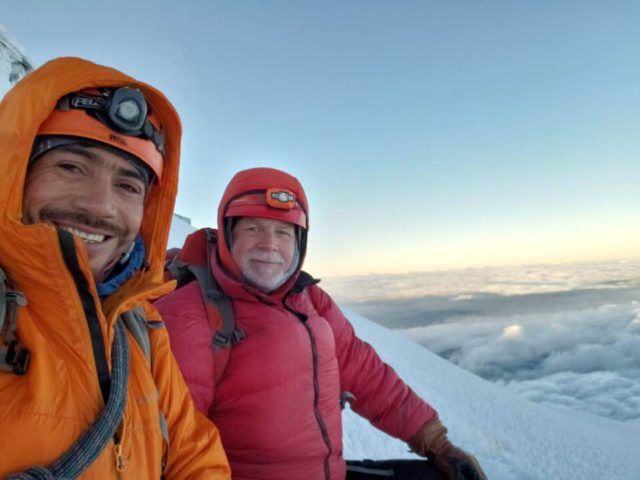 Once on the summit, you get to look down into the caldera that was formed when the eruptions of magma, or lava, left a gigantic empty chamber underground. It was filled with steam, smelled of sulfur and had an eerie aura about it.

We stayed on the summit for about half an hour. Our fast team of kids (26 – 42) had arrived earlier and this old man at 62 arrived about a half an hour later. While I didn’t experience any of the problems I did on Island Peak in Nepal last October, I still wanted to do bit better, but I’m pleased with my overall performance and want to extend gratitude to Ossy with Mountain Madness for staying with me.

The down climb was scary fast – 2 hours and we were back in the hut for a 9 am breakfast of corn tortillas and fresh fruit. We hiked down the road to our cars and are now at the Hacienda Tambopaxi for the night before moving on to Chimborazo for a Monday summit climb.

Ecuador continues to be a rewarding experience, especially with a summit now. The next one, our last climb, will be the highest and toughest. 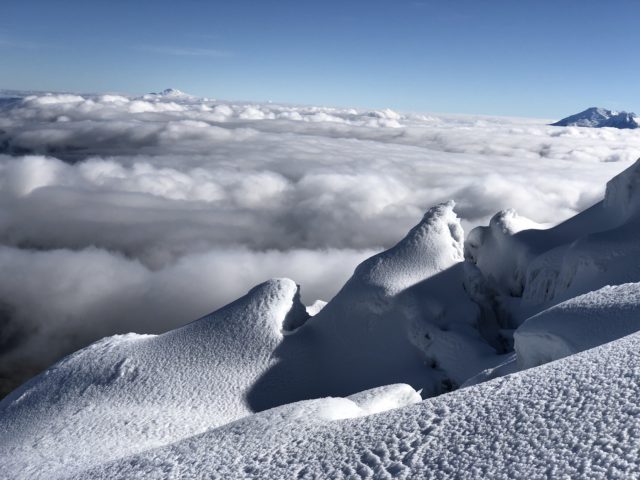 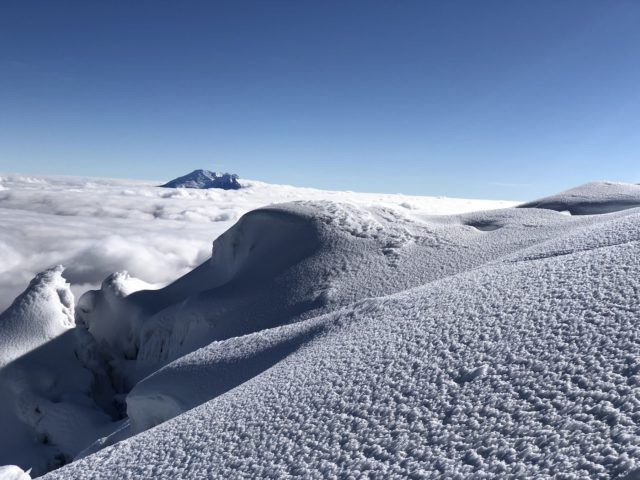 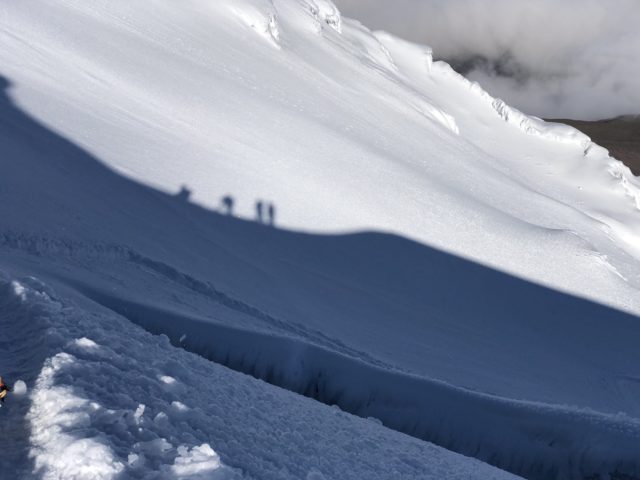 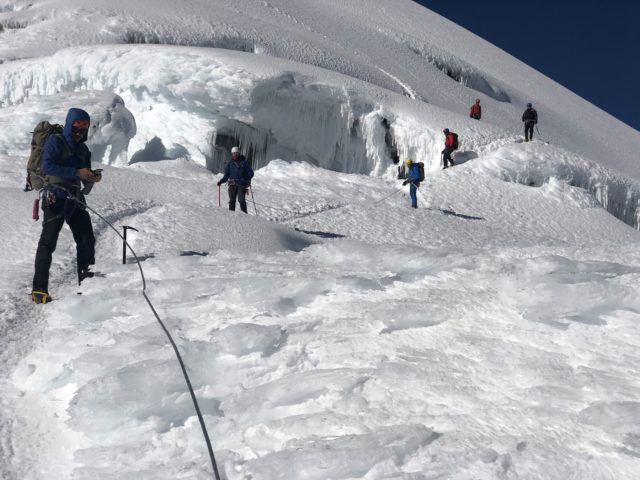 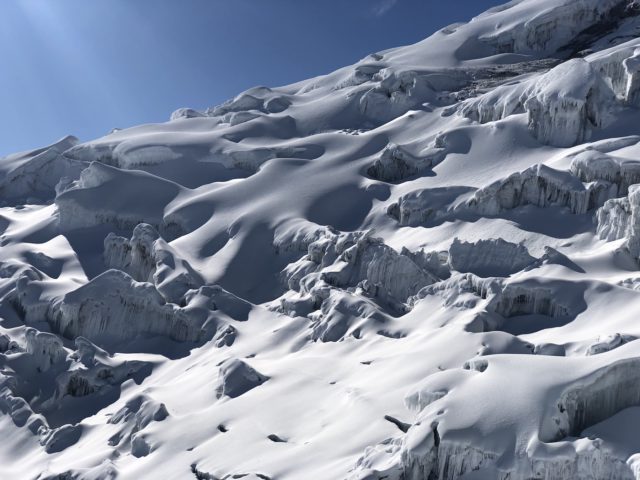 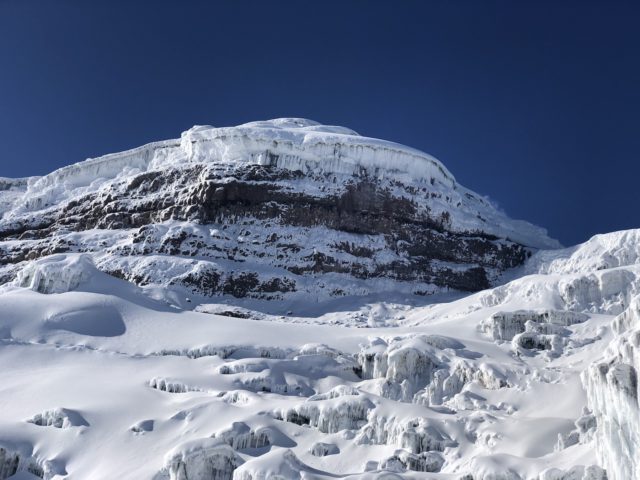 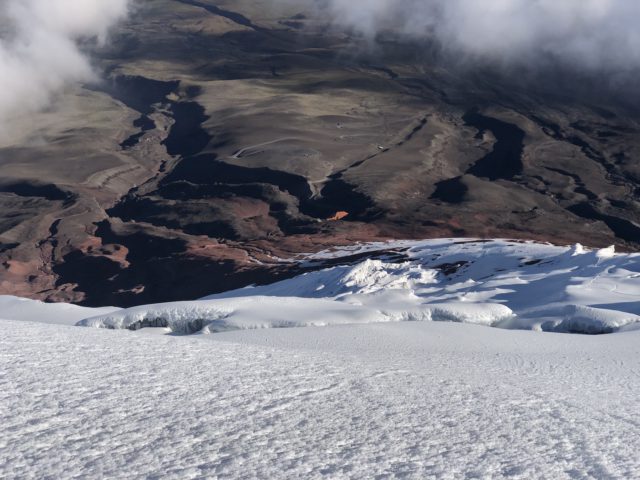 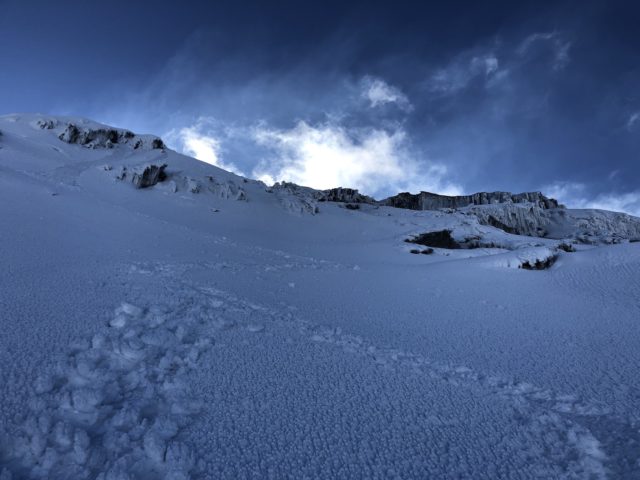 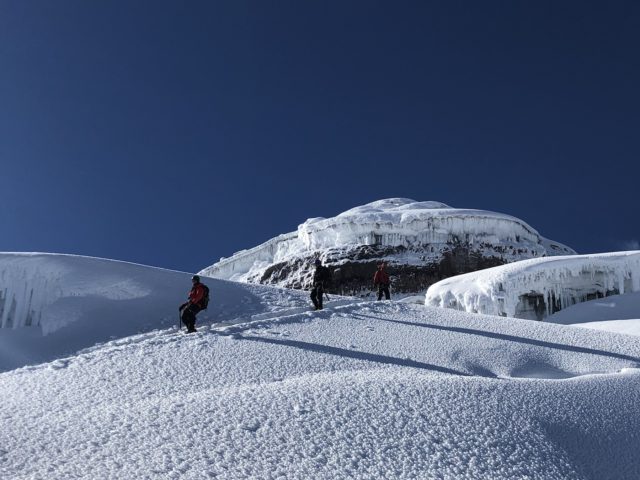