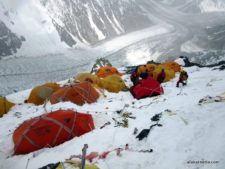 It’s been confirmed that high winds have destroyed Camp 2 along with the tents and gear. Time to reassess for some expeditions. No injuries as the Camp was empty.

Nims has confirmed his team’s gear is gone from Camp 2, blown away by high winds. Most likely so are Mingma G’s gear. Since they and John Snorri were the only teams to have made it that high (plus some SST route fixing Sherpas) it remains to be seen if they will have to abandon their effort or be able to borrow or use some of SST or their members kit.

SST may have dodged a huge bullet by arriving after everyone else and not establishing a huge presence at C2, but we don’t know for sure. With over 45 climbing members, they have a lot of resources so may be able to weather this storm.

The winds were predicted to calm today, Sunday, January 9, 2021, and remain under 20 mph for most of the week. Mind you, this does not diminish the windchill all that much. At these speeds and a still air temp of -40F, the wind chill is still -80F or -62C.

Our team reached to Camp 2 today and it was a wreckage site. We found that both our tents and all equipments that we had left here for the summit plan are all destroyed and swept away by the wind. We have lost everything including all our kits; sleeping bags, mattresses, heated shoe insoles, summit gloves/mittens, summit base layers, paragliding equipment, cooking equipment etc. I am devastated to be breaking this news. Now, I have to reassess and replan everything.

All team members are back at the base camp now. More updates to follow ! Stay tuned.

Mingma Gyalje Sherpa is at BC fearful of the C2 status. Mingma tells me this warning:

Finally after 8 days we have sunshine here in K2 Base Camp. We remained inside the tent for 7 days because of high wind and clouds and of course low temperature. We are not sure about our camp at 7000m. We have most of our gears in our Camp2 which is just below Black Pyramid. If the tent was blown away then we are done to go back home. Hope our tent is there and everything is inside the tent. Today @nimsdai and team went to camp2 to check their gears and deposit some equipment to camp2. Our Camp2 is bit higher than lower and upper Camp2 so it is not possible to go up and down in a day. Weather is changing, we hope we get good weather to go and fix higher camp

It’s very common to leave gear in high camps tents so as to reduce the work on the next trip up. Often it includes a sleeping bag, extra layers, and perhaps route fixing gear such as ice screws, pitons, ropes, slings, and more. There might be a scenario where Minga and the team can borrow spares from other climbs, but this rarely happens in practice.

Recall that Mingma launched a fundraiser to support his teammates but they only raised a few thousand dollars this, most likely, didn’t bring spare gear. I hope his tent and gear are safe since this would be the second year in a row that Mingma had to abandon a winter K2 effort.

John Snorri Sigurjonsson with Muhammad Ali Sadpara and his son Sajid Ali are at base camp. No update on their gear at C2

Seven Summits Treks: All at BC

Seven Summits Trek’s commercial team at K2 Base Camp. Expect a rush by over 20 climbers in the next several days to overnight at Camp 2, at a minimum for their final acclimatization rotation. Expect some issues with tent space, especially at C1. They will need to coordinate with the other teams otherwise there will be 50 to 60 people trying to squeeze into spots that can accommodate only 10 to 15. But the leaders know this and should be able to manage with good communications.

Bernhard Lippert remains hopeful: “Weather is getting better, some winds in 2 days we’ll go back up”

Broad Peak – At Base Camp

Zoltán Szlankó and Alex Goldfarb are now at base camp according to their Pakistani logistics company, Jasmine Tours Pakistan. They did an acclimatization rotation to 6209 meters per Laszlo Pinter.

Zoltán Slankó and Alex Goldfarb, their acclimatization mountain, started to explore the route Pastore Peak. Zoli just wrote ′′ It’s not easy. Nice cold weather.”
Zoli were still on the glacier when he wanted to visit them John Snorri, trying to climb K2, but this way they avoided each other. Zoli was very sorry because she wanted to meet him. They probably will have the opportunity.
The 6209-meter high summit is being apostrophied by some foreign sources (mostly the tour organizers in this one) as ′′ light trekking peak “- Well, before anyone misunderstood, the name ′′ trekking peak ′′ doesn’t mean you could climb in bare hike boots. The name comes from the fact that these peaks under 6500 meters are typically popular trekking routes, often climbing without permission, and entrepreneurial high mountain hikers can try relatively safe. Their technical difficulties are changing, but typically they are not easier than Mont Blanc, they are only 1500 meters taller. Maybe it’s not a coincidence that Pastore Peak doesn’t have a winter climb yet. Zoli Slankó said ′′ swimming through the Danube is not a big adventure, but if someone does it in winter, TV goes out there.” Last year when Lobuche East was climbed in Nepal, there was a 500 meter waterproof section that’s everything but it’s not easy. With that climb, Zoli became the first Hungarian to climb over 6000 m in winter
Alex and Zoltan today went to check out the route to Pastore Peak (6209 m), their planned acclimatization peak. “It isn’t easy” – Zoltan wrote us. “Weather was cold but beautiful” – he added. John Snorri wanted to pay a visit to the pair today but they were still out on the glacier so they didn’t meet. Maybe at a later time!
(Official expedition communication by Laszlo Pinter, Mozgásvilág. Free for editorial purposes, with proper link and credit to this post.)

Over 3 feet of new snow is being reported around Manaslu Base Camp. This is what has stopped many previous winter attempts. We’ll see what happens this year.

Simone Moro, Alex Txikon, and Iñaki Alvarez arrived at Samagon, the last village before Manaslu Base Camp. They will share base camp cooks but climb independently. Moro made this comment:

Arrived yesterday in Samagaon after 9 hours of walking. Along the way I also met the two Sherpas of the other expedition, Tenji and Vinayak, among the few certified UIAGM Alpine Guides. I had promised them two The North Face jackets