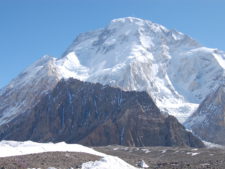 After the first winter K2 summit and the tragic death of Sergi Mingote on K2, now there is a developing situation on Broad Peak.

Zoltán Szlankó and Alex Goldfarb arrived at base camp and conducted an acclimatization rotation to Pastore Peak (6,209 meters / 20,365 ft.), positioned as “an easy “trekking peak” located near K2 and Broad Peak base camp.” Now Alex is missing. This was the last update:

Alex and Zoltan today went to check out the route to Pastore Peak (6209 m), their planned acclimatization peak. “It isn’t easy” – Zoltan wrote us. “Weather was cold but beautiful” – he added. John Snorri wanted to pay a visit to the pair today but they were still out on the glacier so they didn’t meet. Maybe at a later time!

And from a few days prior to that last update:

Alex Goldfarb and Zoltan Szlanko today have arrived at Broad Peak Base Camp. Although a short day’s trip, it was really hard because of the punishing windstorm. They had to fight to be able to pitch the tents. No idea about temperature, Zoltan only sad it was “freaking cold”. There is no chance to build an igloo, even if they wanted to, like Alex Txikon did a couple years back on K2. There is hardly any snow, everything is black, they built the tents on the rocks of the moraine. Food is good, which is always important. (Official expedition communication by Laszlo Pinter, Mozgásvilág. Free for editorial purposes, with proper link and credit to this post.) 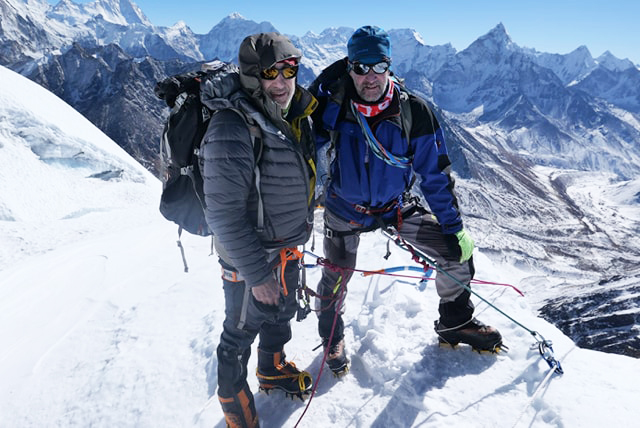 This is all we know at the moment as told by the expedition press officer, László Pintér:

After having not returned by the agreed deadline from his acclimatization climb, a search and rescue was initiated

Russian-American Alex Goldfarb and Hungarian Zoltan Szlanko have set out to make a winter attempt on 8051 m Broad Peak. Because of the short time they have for the expedition, they have kept their expectations low and took this as an experimental expedition.

After having arrived in Pakistan and having sorted out all necessary procedures they started their 5-day trek to base camp which they reached on 8th January.

Alex and Zoltan then made a reconnaissance of the route to their planned acclimatization peak, 6209 metre Pastore, which has not been climbed in winter before.

A few days later they set out to give it a go. After assessing the heavily crevassed terrain’s dangers, the experienced climbing instructor and mountain rescuer Zoltan suggested to return and did so, while Alex decided to continue. In his last communication with base camp, Alex told to return by evening of Saturday, 16th January. But as he didn’t appear, Sunday morning a ground team was initiated and went to search the route, but found no trace of him yet. Besides Zoltan himself, the Icelandic climber, John Snorri Sigurjonsson who is on nearby K2, are helping with the search. On Monday local authorities are planning to make a helicopter search.

More info as soon as we get it. Our thoughts and prayers are with Alex and his family.

The expedition’s media partner is the Hungarian online outdoor magazine, Mozgásvilág. Bilingual news dispatches are available in Hóhatár, a Facebook group run by Mozgásvilág and dedicated to international mountaineering news.

They were trying another difficult winter climb as Broad had only been summited once in winter on March 5, 2013. That team also saw tragedy. Lead by Polish climbers Adam Bielecki, and Artur Malek, two members Maciej Berbeka and Tomasz Kowalski died during the descent.

Last year, a winter attempt was made by Denis Urubko and Don Bowie, but Bowie got sick and left. Urubko made an unsuccessful attempt alone.

A helicopter search has been organized for tomorrow to look for Alex Goldfarb. To cover the costs, the son of Alex has initiated a croudfunding page: https://www.gofundme.com/f/alex-goldfarb-helicopter-rescue
The plan is that the heli will take off from K2 Base Camp tomorrow morning and make a search flight of 2-3 hours. Meanwhile, a drone search has already been conducted. It has reached the shoulder of Pastore Peak, where the place of high camp is. Alex thought to have reached high camp and that was where he last radioed from before his planned summit push. There was no sign of Alex there.
Unfortunately, snow has started to fall, but we hope it will be possible for the helis to fly tomorrow. John Snorri and Sajid Saspara, the son of Muhammad Ali Sadpara generously offered their help and spend the night in Broad Peak Base camp, where they are supposed to be picked up by the helis for the search, together with Zoltan Szlanko.
More info as soon as we get it. Thoughts are with Alex and his family

Free for editorial purposes, with proper link and credit to this post.)(Official expedition communication by Laszlo Pinter,