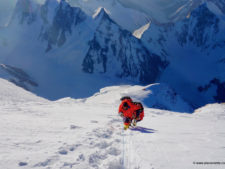 And it’s over, but we still don’t know the ending. History will show that that nine Sherpas and one Nepali first summited K2 in the winter. While others gave it their best, the harsh conditions kept most just below the top. There is a reason K2 took 23 years and stood strong as the last 8000er to be summited in winter. And it took a group of Nepalis working together as a team of ten who were experienced and talented climbers along with the vision of Mingma G  to make it happen.

However, there is still no news from three climbers assumed to be descending at this point, almost 10 pm Friday night K2 time: John Snorri, Ali Sadpara, and Juan Pablo Mohr. They left Camp 3 almost 24 hours earlier. There is no conformation if they summited, their current status or plans. I’ll update when I have 100% confident news.

I’m getting direct reports from the mountain that Sajid Sadpara is back in camp 3 after an oxygen regulator problem. He reached the Botttleneck. It is still a long way from there to the summit.

John’s wife gave this update around 6 pm K2 time, Friday, February 5, 2021: This was four hours before this post.

“Sajid is back in camp 3 his oxygen regulator was not working he came back from bottle neck. They were at bottle neck around 10 am PKT. According to him everyone was fine and were going with good pace. John Snorri, Ali and J Pablo from Chile are going together for summit.  The Garmin tracker is out of battery. I am talking with the teams chef and base camp manager Harry. He has radio connections with the team. We have decided not bother them and wait until they will contact Harry. We are not listening to other news, we are the only source to the team. We have strong believe that they will summit soon.

Tragically, 42-year-old Bulgarian climber Atanas Skatov died from a fall after he turned back earlier in the night. He was descending from Camp 3. A Pakistani rescue helicopter recovered his body according to this report. He was one of the most experienced climbers on K2 this winter with 13 8000ers. It appears he fell when passing an anchor and was not clipped in to any of the fixed ropes. Contrary to other reports, it was not an old rope failure according to Dawa of SST.

This is the second K2 death, following Sergi Mingote’s fall while descending between C1 and ABC. The other death was Alex Goldfarb who died while acclimatizing on Pastore Peak, in preparation to attempt Broad Peak. My sincere condolences to all of the families, friends and teammates.