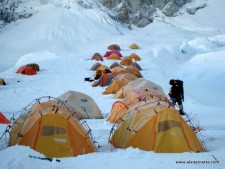 Climbing continues on Everest but Nepal just issued new rules as to who can climb when.  Incredibly late as teams are in the midst of their expedition planning. Also, teams are starting their acclimatization rotations with some at Camp 1 in the Western Cwm.

Nepal continues to dabble with the Everest formula even though teams are already climbing and making plans. Once again, it demonstrates how out-of-touch government officials are when it comes to managing the mountain. Or perhaps local Nepali guides are influencing decisions for their advantage. In any case, the latest are rules as to who can climb when:

Where do I start with breaking this down? Before I do, I applaud officials for even thinking about this but changes like this should go through the Expedition Operators Association and get reviewed with input from all the major guide companies – foreign and domestic. And the better approach would be to stop the greed of issuing so many permits in the first place. Nepal should follow China’s lead and limit permits to under 300.

What is a weather window? Usually, guides like to see winds under 30 mph, but some will climb up to 40. There is no one standard. Some years there are long weather windows such as in 2018 with eleven consecutive days of good weather, but in 2019, there were only three days. It’s unclear how this policy can be implemented with the vagaries of the weather.

Usually, permits are issued to the team leader once they arrive in Kathmandu, thus local companies are usually permitted first thus have an advantage if you think going in the first window is important. No matter, there is a bias built into the rule.

LImiting the number of climbers per push is not a bad idea but totally unenforceable. Teams look at the weather forecast and the acclimatization of their members plus the level of supplies (tents, fuel, oxygen, etc.) at the South Col before making a decision on their summit push. Sometimes a team will reach the Col and spend an extra night due to weather or other conditions. In other words, it’s a complex set of variables that result in hundreds of people going up at times. There is no possible way to have an official serving as the gatekeeper, counting people on their summit push and stopping climber number 171. Naive at a minimum, silly at best, incompetent rule makers at the core.

One operator told me:

Recognizing the absurdity of these rules Mira Acharya, director of the Department of Tourism told the Kathmandu Post:

“Based on the current trend, we estimate the number of permits to be close to 400. We have issued a slew of measures to control crowds this year. If this does not work this season, we will come up with other measures next year.”

According to the Himalayan Database, on May 22, 2019, the single-day summit record was set at 219 climbers from the Nepal side. 218 summited the previous day. Combined, those days represented 66% of the 662 total summits that spring – a record.

Also, officials announced that any climber who plans on multiple expeditions must be tested for COVID between each one.

Several teams climbed to Camp 1 in the Western Cwm yesterday. Others, seeing high winds in the forecast, choose to hold tight for a few more days.

The permits for Everest continue to approach the 219 record of 382. The Nepal Ministry of Tourism posted these foreign permit tally thus far.

The Tibet side closed to foreigners but there are 40 Chinese nationals reported now at base camp.

Some of the Annapurna summiters will move to Dhaulagiri but the route fixing hasn’t begun. Among the climber is 82-year-old Carlos Soria is on this 12th (yes twelfth) has arrived at Dhaulagiri Bas Camp after trekking in the Khumbu for acclimatization. He only has it and Shishapangma to complete climbing all fourteen of the 8000-meter peaks.

Visit my annual team location table and tracking climber’s blogs (see sidebar) to see where everyone is perched. If you have a team not listed, please let me know and I will add them if I can track them. If you prefer not to be mentioned, please contact me.